A senior Republican on Wednesday denounced the Mar-a-Lago raid as part of a conspiracy to target Joe Biden’s likely 2024 opponent and accused the media of hailing a second “Russia hoax.”

And Elise Stefanik, the third-senior Republican in the House of Representatives, said leaks justifying the operation weren’t enough to shield the FBI and Justice Department from an investigation.

“This is Russia hoax 2.0 with the typical loyal media accomplices,” Stefanik told Axios.

“The most recent leaked justification that began as nuclear codes has now morphed into what Joe Biden’s corrupt agencies believe the media will transcribe the loyal stenographers that they are.”

Leaks shortly after the raid claimed nuclear secrets were among the documents Trump brought to Mar-a-Lago after he left office. 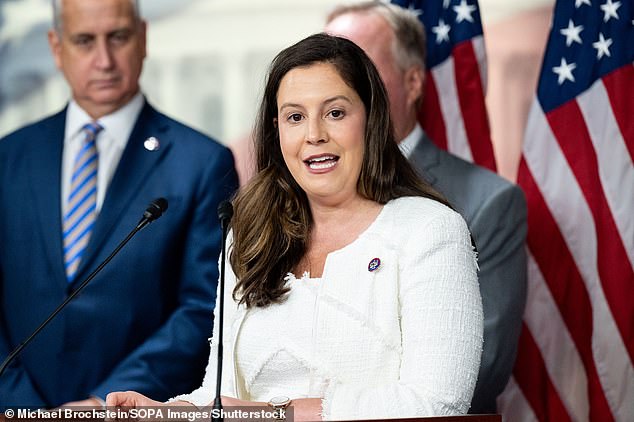 MP Elise Stefanik on Wednesday said the Mar-a-Lago raid was a conspiracy to target Joe Biden’s likely 2024 opponent and accused the media of falling for a second “Russia hoax.”

Allies have rallied in Trump’s defense, insisting he is the victim of another witch hunt as his political opponents seek to haul him out of the 2024 presidential race

Court records have not mentioned any of this since. But they revealed that during the Aug. 8 raid, agents seized boxes and containers containing more than 100 classified records.

They also found classified documents kept in Trump’s desk, according to Tuesday’s filing.

It included a photo of some of the papers and their colored covers, showing their classified status.

It comes after a redacted affidavit was released last Friday detailing part of the Justice Department’s case to request the search. It raised concerns that spies and sources could be endangered if the classified information fell into the wrong hands.

But Stefanik hinted that the agencies would not be protected if Republicans regained Congress in the midterms.

“If the media thinks that an absurdly redrafted affidavit and leaks will stop congressional oversight, they are terribly mistaken,” she said.

“The fact is that the Biden White House is using the Justice Department and FBI as political weapons of Joe Biden and Democrat campaigns to target Biden’s most likely opponent of 2024.

“These are the same agencies that were caught illegally meddling in the 2020 presidential campaign when they directed social media companies to suppress Hunter Biden’s laptop from Hell.”

“Mar-a-Lago is a 58-bedroom, 33-bathroom historic mansion on 17 acres of land stretching from the Atlantic Ocean to the Intracoastal Waterway,” the suit points out. A DOJ official was shown a storage room where government documents were kept alongside clothing

The timeline above shows just some of former President Donald Trump’s struggles with the national archives since leaving office, including an independent court battle with the Jan. 6 committee

Trump himself has paved the way for presenting the investigation as a partisan operation.

“Terrifying how during the Mar-a-Lago raid the FBI threw documents on the ground at random (perhaps like it was me!) and then started photographing them for the public to see,” he wrote on his platform Truth Social.

‘Thought they wanted them kept secret? Luckily I approved the classification!’

None of the back-and-forth has resolved a question at the heart of the mystery: Why did Trump want to hold on to classified documents and other presidential records?

“The former president’s attorney offered no explanation as to why boxes containing government records, including 38 documents with classification markings, remained on the premises nearly five months after the fifteen boxes were made and nearly a year and a half after the end of administration,” it said in the most recent registration.