By Brendan Carlin for The Mail on Sunday

The Government was accused last night of making a “futile bid” to pressure MPs into a Northern Ireland deal that risked betraying Brexit.

Tory Eurosceptics warned Prime Minister Rishi Sunak that backing down in Brussels on the Northern Ireland Protocol issue would do no good.

Former Brexit Secretary David Jones also told No10 that relying on Labor Party votes to push a new deal “would be a very divisive course of action”. Suggestions followed that London and Brussels are nearing an agreement to resolve issues with the protocol, which has been accused of driving a wedge between Northern Ireland and the rest of the UK. 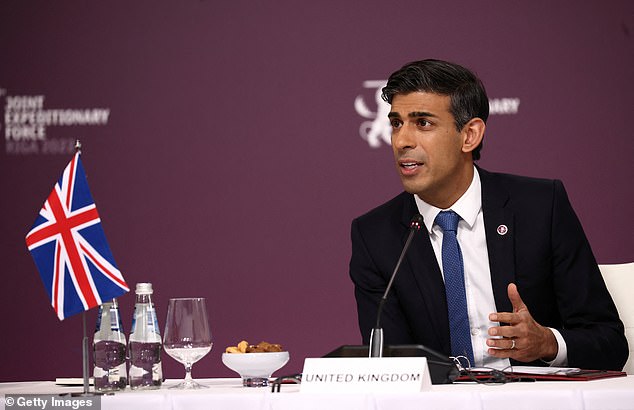 The protocol is part of the Brexit deal agreed between the UK and EU to ensure free trade continues across the Irish border. It led to additional goods controls between Great Britain and Northern Ireland. However, this angered the Democratic Unionist Party (DUP), which has boycotted Northern Ireland’s power-sharing government for months.

However, optimism that there could be a breakthrough in resolving the standoff grew after the EU and UK agreed terms for access to data detailing the flow of goods from mainland Britain to Northern Ireland, which is effectively in the EU It has a border with Ireland. Yesterday there were claims – which have been denied by UK government sources – that ministers are ready to shelve a controversial bill that suspends parts of the protocol as a show of goodwill towards the EU.

It sparked unease at the Tory Brexiteers’ European Research Group (ERG). Last night ERG deputy leader Mr Jones fired a warning shot across the government’s bow, saying it “must recognize that it is absolutely futile to try to force Tory MPs into a Northern Ireland Protocol agreement that is a dilution of the Brexit deal”.

He added: “It’s pointless because unionist politicians will rightly never accept it. And without their consent, there will still be no return to decentralized democratic rule in Northern Ireland.

“So, unfortunately, all this breathless talk of breakthroughs in the negotiations with Brussels will do very little.”

On a visit to Belfast last week, Sir Keir Starmer offered Mr Sunak “political cover” to allow the Prime Minister to secure a new deal through Parliament by promising Labor support in the Commons

On a visit to Belfast last week, Sir Keir Starmer offered Mr Sunak “political cover” to allow the Prime Minister to secure a new deal through Parliament by pledging Labor support in the House of Commons to overturn the ERG’s “Brexit cult of purity”. .

But Mr Jones warned the Prime Minister that a move based on Labor votes “would be a very divisive course of action”. He added: “We must respect the will of the democratically elected unionist politicians in Northern Ireland and restore the constitutional integrity of the UK.”

Last night, DUP leader Sir Jeffery Donaldson downplayed talk of an impending deal, saying at a meeting with Foreign Secretary James Cleverly last week it became clear “we are not on the verge of a major breakthrough”.

He added that “tinkering with the margins of the protocol simply will not work” and called for “provisions that respect Northern Ireland’s place in the UK internal market”.

Government sources last night insisted the talks had been constructive but acknowledged there were significant gaps to be filled.