Nadhim Zahawi has been disqualified from a knighthood in the New Year’s roll of honor over his tax affairs, it was claimed today.

The Tory leader faces new questions after finally releasing a statement to clear up “confusion” over a significant deal with HMRC.

Mr Zahawi is understood to have made a payment to the tax authorities at the end of Boris Johnson’s reign as chancellor – reportedly in the well into seven figures.

But the cabinet minister insisted both sides agreed the problems with his tax were “negligent” rather than intentional.

Labor is calling for an independent inquiry into the revelations. However, Secretary of State James Cleverly underlined Mr Zahawi’s background as an entrepreneur in an interview this morning and said he believed his colleague would remain in office.

Mr Cleverly also raised eyebrows by claiming he didn’t know details of the situation because he had been abroad on business and spent yesterday resting and ‘catching up’ on ‘shopping’.

The Sun said on Sunday Mr Zahawi – founder of polling firm YouGov – had been nominated for a knighthood in the latest honors process but was not on the final list.

A source close to the former Vaccine Secretary said: “Nadhim is very proud to have led the world’s leading rollout of vaccines in the UK and reopened schools during Omicron.

‘And it was the honor of his life to coordinate Her Majesty’s funeral in the Cabinet Office. He did these things to serve the country he loves and that is reward enough.”

A Westminster source familiar with the trial told MailOnline: “These faceless apparatchiks go around giving each other every honor under the sun in a jiffy.

“But when someone cites the state’s only two achievements in recent years, on vaccines and Her Majesty’s funeral, some hack decides to block recognition of true achievements over a tech billing point. It’s embarrassing.” 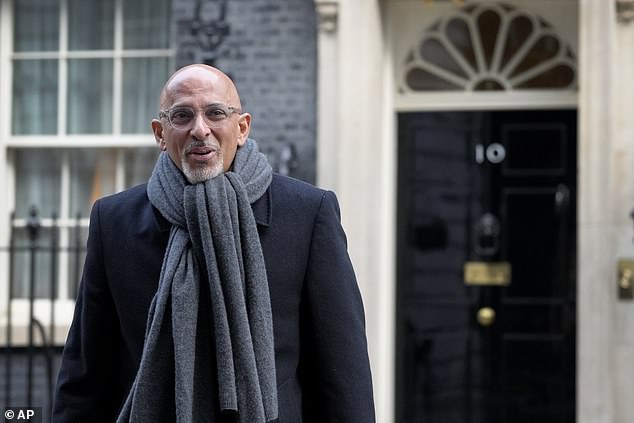 Mr Zahawi did not disclose the amount of the HMRC settlement – reportedly an estimated £4.8million including a 30 per cent penalty – and did not confirm whether he had paid a fine.

He denied allegations that he avoided tax by using a Gibraltar-registered offshore company to hold shares in YouGov.

Mr. Zahawi didn’t take any founder shares when he founded YouGov and said in his statement his father took shares “in exchange for some capital and his invaluable guidance”.

He continued: “Twenty-one years later, when I was appointed Chancellor of the Exchequer, questions were raised about my tax affairs. I discussed it with the Cabinet Office at the time.

“After discussions with HMRC, they agreed that my father was entitled to founding shares in YouGov, although they disagreed on the exact allocation. They concluded that this was a “negligent and not intentional” error.

“So that I could focus on my life as a civil servant, I decided to settle the matter and pay what they felt was due, which was the right thing to do.”

He added that the matter had been resolved and that all his tax affairs were “up to date” when he was appointed Conservative Party leader by Mr Sunak in October.

Sources stressed that there had been no “negotiations” with HMRC and Mr Zahawi was merely ordering his accountants to pay what the tax authorities were asking to settle the matter.

A source told The Sun on Sunday: “Nadhim has been knighted. As part of normal due diligence, Cabinet officials contacted HMRC in December.

‘Nadhim did not appear on the list later in the new year.’

The Cabinet Office refuses to comment on individual cases of honor.

Mr Cleverly said he was unable to answer questions about Nadhim Zahawi’s tax affairs as he carried out his duties as Foreign Secretary and was “doing some shopping”.

When asked why he didn’t have details, he told BBC’s Sunday with Laura Kuenssberg: “I’ve spent the whole of last week in the United States and Canada.

“I returned to the UK on an overnight flight early Friday morning before then engaging with my constituents until Friday and resting a bit and doing some shopping on Saturday.”

He added: “The decision on how much detail to make public is rightly up to Nadhim himself.”

“Well, I think it’s right and proper that people’s tax affairs are personal and private,” he said.

He added: “We keep hearing that we want politicians to be more like the rest of us and less some kind of weird and unique beast.

“Well, I think the rules that we apply to others also apply to politicians.

“That’s why, as I said, we don’t demand it from others, and when politicians decide to do it, that’s great. But I think having a unique requirement that is different from the rest of society, I don’t think that would necessarily be the best way forward.’

Rishi Sunak faces questions about what he knew about the matter and calls for Mr Zahawi to be fired.

The PM’s pledge to restore the “integrity” of the government was dealt a blow last week after he was fined by police for not wearing a seatbelt and criticized for allocating Leveling Up funds.

Downing Street said it had nothing to add to Mr Zahawi’s statement and confirmed the Prime Minister had confidence in him as Tory leader.

Opposition parties have called for an independent investigation and the release of all of Mr Zahawi’s correspondence with HMRC.

Labor Party leader Anneliese Dodds said: “Nadhim Zahawi is yet to explain when he found out about the inquiry and whether he was Chancellor and in charge of our tax system at the time.

“He must explain why his legal representatives last December said his affairs were up to date only for him to settle a £1million fine this month.

“And he needs to explain why he shut down legitimate questions from tax professionals with threatening and intimidating legal action last year.

“Rishi Sunak needs to remove Nadhim Zahawi as party leader and clear things up immediately – including what he knew about the Zahawi investigation at the time.”

Liberal Democrat Deputy Leader Daisy Cooper said: “Zahawi and his Conservative Cabinet colleagues are arrogantly trying to sweep this under the rug.

“There are facts that still need to be clarified, so an independent investigation needs to be conducted to get to the bottom of the matter.”