A 17-year-old Pennsylvania boy with Tourette’s disease had his tics dramatically reduced through experimental brain surgery.

For three years, Callum deQuevedo was plagued by severe tics that included screaming, swearing and punches to the head.

The successful surgery involved inserting a device called a neurostimulator under Callum’s collarbone, which sends a current to his head, creating electrical impulses that block the abnormal nerve signals that cause tics.

The experimental technique is typically used to treat Parkinson’s disease and has already reversed symptoms of the brain disorder in patients in the UK. 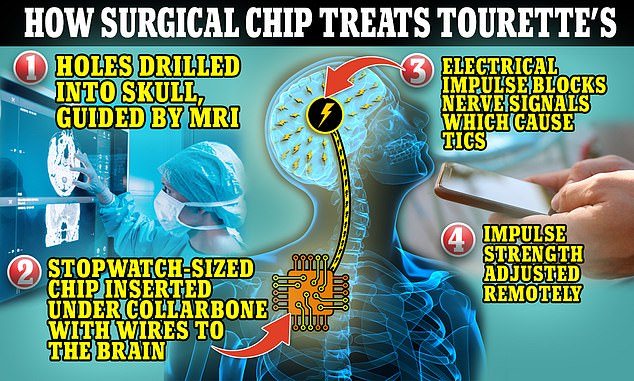 Doctors, guided by an MRI scanner, drilled two holes in Callum’s skull. An electrode is then implanted there, which is connected to a thin insulated wire that is passed under the skin of the head, neck and shoulder. Then a stopwatch-sized chip was inserted near his collarbone, which connected to the wire in his brain. This chip emits electrical impulses that block the abnormal nerve signals that cause tics. Callum now adjusts the strength of the impulses with an app

Callum’s mother, Dawn deQuevedo, said it took about 30 doctors seven months to get a diagnosis of Tourette’s syndrome

A few weeks later, Dr. Joohi Jimenez-Shahed, Tourette’s lead expert, measured the levels of current sent to Callum’s brain, which he was eventually able to do himself with a remote control.

Callum’s improvement was gradual but life-changing.

He told CBS News after the procedure, “I just felt like this is the best thing I’ve felt in a long time.”

“I feel more relaxed now. It’s nice that I don’t have to keep moving to distract myself or stop the tics. I can sit in my house and watch TV without worrying, screaming, or hitting me, or hitting me or anything.

The experimental surgery is typically used to treat Parkinson’s, a brain disorder characterized by involuntary or uncontrollable movements such as tremors, stiffness, and difficulties with balance and coordination.

Callum’s tics were similar to those caused by Parkinson’s. This included screaming, cursing, and hitting oneself on the head, head jerking, face crunching, and grunting.

He would also occasionally wake up screaming in the middle of the night, while at times he would feel like he was choking and unable to breathe.

Callum’s condition particularly worsened when he was 14 years old.

His mother, Dawn deQuevedo, said, “So the next day she sent him off to school and the nurse calls and says, ‘Listen, he’s really struggling to breathe.'” So every day that week, the nurse called and said : “There is something wrong.”

At that point, no one knew it was a tic. Callum’s parents took their son to an ear, nose and throat clinic, where a diagnosis of a vocal cord disorder was suggested.

But a speech therapist admitted Callum’s condition was beyond their expertise, so he was taken to Children’s Hospital of Philadelphia.

It took about 30 doctors seven months to get a diagnosis of Tourette’s Syndrome.

Even after the diagnosis, Callum struggled with his mental health to the point where he attempted suicide.

The treatment is called deep brain stimulation and works like a pacemaker.

Doctors drilled two holes in Callum’s skull, guided by an MRI scanner, to determine where in his brain would be most receptive to treatment.

An electrode is then implanted there, which is connected to a thin insulated wire that is passed under the skin of the head, neck and shoulder.

Callum’s violent tics, such as screaming, cursing and hitting himself on the head, have plagued him for three years

Doctors drilled two holes in Callum’s skull to insert a small conductor into his brain. They used MRI to pinpoint the exact location that would be most effective in reducing his tics

The wires are connected to a stopwatch-sized conductor that is surgically implanted near the collarbone.

A few days after the operation, Callum returned to the doctors, where Dr. Jimenez-Shahed remotely launched the chip to send electrical impulses down the wires to the brain and adjusted the levels to the optimal amount.

The electrical impulses block the abnormal nerve signals that cause Callum’s tics.

He can now adjust the strength of the pulses himself via an app and said his tics have reduced by 70 percent since the device was implanted.

He said, “The brain is smarter than anything we can ever imagine, and the brain is able to get that help from this device and learn along with the device.”

Tourette’s is thought to affect more than half a million Americans and 300,000 Britons, most of whom are children.

The exact cause of the condition is unknown, and it is believed to be caused by a combination of genetic and environmental factors.

The disease usually begins in childhood, between the ages of two and fourteen. Half of those affected say their symptoms improve with age, while others say they disappear completely.

Rarely, it can occur later in life due to “reactivation” of childhood tics or psychiatric or genetic disorders, as well as damaged areas of brain tissue.

There is currently no cure for the syndrome, but treatment — such as therapy and medication — can help manage the symptoms.

https://www.dailymail.co.uk/health/article-11658187/Tourettes-teen-experimental-chip-implanted-skin-zaps-away-tics.html?ns_mchannel=rss&ns_campaign=1490&ito=1490 Tourette’s teenager has an experimental chip implanted under his skin that eliminates tics