By Will Stewart for MailOnline

A “traitorous” Ukrainian politician who switched sides to support Vladimir Putin when he ordered the invasion of Ukraine is said to have been shot dead with a shotgun, while his wife was fatally stabbed at their home in the occupied Kherson region.

Oleksiy Kovalyov, 33, a senior agricultural official in the Moscow-appointed military-civilian administration in Kherson, was killed with a pump-action shotgun at his apartment in the town of Hola Prystan on Sunday.

His wife, 38, was also stabbed in the attack and her throat was cut before dying in hospital, local media reports.

Russian officials said they were investigating the attack, the latest in a string of apparent assassinations of Moscow-backed officials in occupied territories. 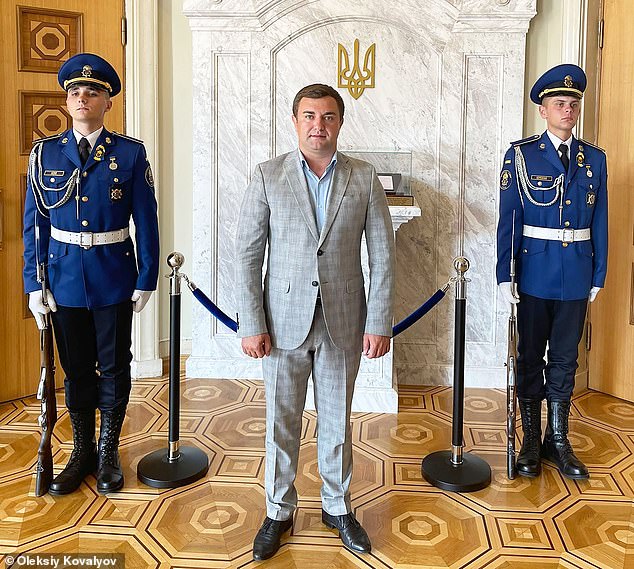 Oleksiy Kovalyov, 33 (centre), a senior agricultural official in the Moscow-appointed military-civilian administration in Kherson, was killed with a pump-action shotgun at his home in the town of Hola Prystan on Sunday

Russian officials said they were investigating the attack, the latest in a string of apparent assassinations of Moscow-backed officials in occupied territories. Pictured: Kovalyov (left) at a friend’s wedding party

The couple is said to have been murdered by a hit squad, according to local media reports.

After a previously failed assassination attempt, Kovalyov had defiantly told his Ukrainian enemies, “You won’t stop me.”

“The occupiers have started intensive searches and document checks. Be careful, Ukrainians.’

The killing of the officer and his partner is the latest in a string of Ukrainians who have held administrative or police posts under Putin’s occupation forces.

Russian-installed officials said a deputy chief of traffic police in the southern Ukrainian city of Berdyansk died in hospital on Friday after being injured in a bomb blast.

Five more suspected assassinations have been reported in the Kherson region, where Ukraine is now engaged in a counteroffensive to retake territory from the Russians.

The mayor of the regional capital of Kherson, Vladimir Saldo, was in a coma after suspected poisoning in a Moscow hospital.

Last month, Ukrainian President Volodymyr Zelenskyy dismissed his spy chief and prosecutor general, citing dozens of cases of cooperation with Russia by officials in their agencies.

Kovalyov was appointed deputy chairman for agriculture in the main grain region. He switched sides in April.

After a car bombing, Kovalyov blamed the SBU, Ukraine’s secret service, defiantly saying in a video: “I’m alive, I’m healthy. I aspire to get back to work.

A previous assassination attempt on Kovalyov – who was a deputy for the ruling Servant of the People party in Kyiv before the war – had failed, prompting a message from his hospital bed in June.

After a car bomb attack, he blamed the Ukrainian secret service SBU and defiantly said in a video: “I’m alive, I’m healthy. My goal is to be able to go back to work on Monday.

“They didn’t scare me and I want to keep working. To be with my people and work in my constituency until my duties expire in 2023.

“To my enemies and to those who planned this sabotage – you will not stop me.”

Some reports state that the politician who was killed was found by his mother, who called emergency services. Doctors could not save his wife.

It was the first major city to fall into Ukraine after Moscow invaded.

https://www.dailymail.co.uk/news/article-11159591/Traitor-Ukrainian-politician-switched-help-Putin-blasted-death-shotgun.html?ns_mchannel=rss&ns_campaign=1490&ito=1490 ‘Traitor’ of Ukrainian politician who helped Putin ‘will be shot with a shotgun’

Meghan Markle's claim that a fire broke out in Archie's bedroom has been confirmed by a "safety source".