Travelers have to wait for SIX HOURS at Calais while queuing for ferries back to the UK as the port “cannot handle the need for French and UK border control”.

By Alice Giddings for Mailonline

People traveling to the UK had to queue at the port of Calais on Saturday with a six-hour delay, with DFDS and P&O Ferries forced to apologize for the long waits.

Many passengers missed their departure and P&O managed additional ferries for disgruntled travelers after queuing into the evening.

Craig Price, from Essex, told the BBC he spent five hours in Calais on Saturday after touring around Italy and France.

He said: “We arrived at 3pm and got through at 8pm… The design of the port does not seem able to cope with the need for French and British border control,” he said.

Mr Price added that only two-thirds of UK border control booths were manned.

The BBC said passenger Josh Williams also had to wait five hours to board a ferry back to the UK on Saturday, and shared a photo of scores of cars with families queuing to take their children ahead of the new school year next week to return. 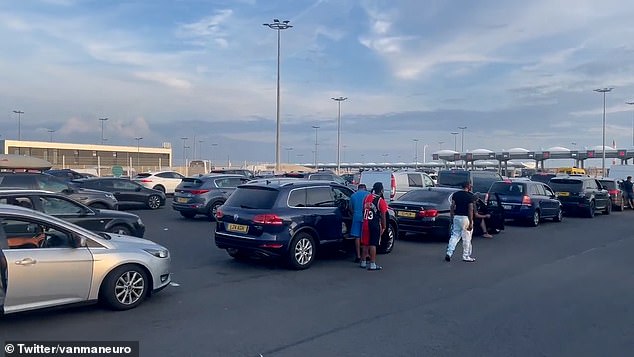 At around 6pm on Saturday, DFDS took to social media to warn that there were queues of up to six hours from Calais and earlier this morning asked travelers to allow at least two hours for border control and check-in.

P&O Ferries said on social media yesterday: “We have an extra crossing until tonight to help get everyone to Dover. Once you’ve jumped the queues, you’re at the next junction after Dover.

‘We sincerely apologize for the wait times. These are due to queues at border control.”

A Twitter user posted a video and said: “Welcome to the Port of Calais and welcome to Brexit.”

Another said: “If the French check lasted 2 minutes yesterday because they had a lot of lanes open then we get to the British part and this!”

As of 12pm today DFDS announced there are no queues at check-in but queues of up to 45 minutes at border controls whilst Dover has had free flowing traffic.

Pictured: The queues in Calais on Wednesday as travelers sat for two hours at check-in and border control

Similar waits were experienced in Calais on August 24 as heavy traffic exited the Eurotunnel after passengers had to exit their cars and exit through an emergency services tunnel when the train alarm was activated.

A Le Shuttle spokesman said at the time: “The shuttle was stopped and inspected in a controlled manner. As a precaution for their safety and comfort, we have transferred the passengers on board to another shuttle through the service tunnel [which is there for exactly that purpose].

“We took them to the passenger terminal where food and drinks were available.”

https://www.dailymail.co.uk/news/article-11178437/Travellers-face-SIX-HOUR-waits-Calais-queuing-ferries-Britain.html?ns_mchannel=rss&ns_campaign=1490&ito=1490 Travelers have to wait six hours in Calais while queuing for ferries back to the UK