An Australian politician didn’t get the response he expected when he proudly revealed photos of the new seat designs on Victoria’s trains.

Ben Carroll, industry secretary in Dan Andrews’ government, shared a photo on his Facebook page of the refurbished interior of the V/Line VLocity train fleet, which he claimed would be “more convenient and accessible” for commuters.

However, travelers weren’t impressed by the “terrible” new purple design and also slammed the “rock-hard” seats. 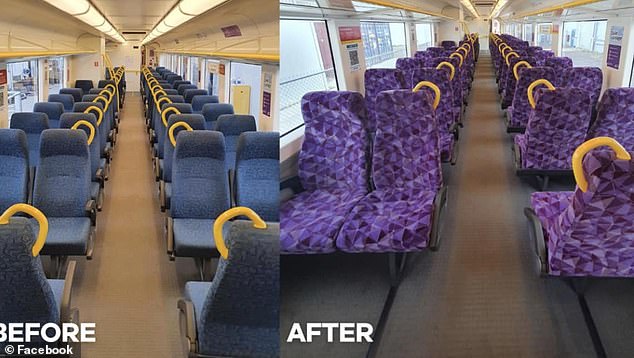 Victorian MP Ben Carroll was not expecting the wave of vitriol he received after proudly posting about the V/Line train’s refurbished interiors, as hundreds dubbed the update “terrible”.

Are you going back to work today on the V/Line regional train network?’ asked Ben in the caption.

‘We have completed the refurbishment of our entire Vlocity train fleet to make regional passenger journeys more comfortable and accessible with upgraded seats and flooring.’

The mottled design is preferred on public transport around the world as it discourages graffiti ‘tags’ that cannot be made or seen clearly.

However, hundreds took to the comments to poke fun at the “terrible” seat covers.

“It’s great that they’ve been refurbished, but I like the blue seats better. The purple looks a bit like McDonald’s Grimace, especially with the yellow border,” said one woman.

“They look like seats at a local strip club,” joked another, while a third laughed they had “a calming hint of psychedelics.”

“Oh great, we can all sit in grandma’s living room,” joked a fourth.

“Is it just me or do the before and after pics look like they were mislabeled? This purple is terrible!’ commented another.

Which train seats do you think look better?

Some disputed how comfortable the new seats were, as one said they were “rock hard” and another said they felt like sitting on a “wooden bench”.

“These seats are rock hard. Not comfortable at all. The old ones were so much better,” replied one traveler.

“It’s so hard to sit in these seats for so long. No padding like sitting on a bench. The blue seats are so much more comfortable,” agreed a second.

“New upholstery, same old seat structure that really puts my back to the test after about 30 minutes,” said another.

Not everyone was unhappy with the revamped railroad, as one commuter thought it looked “groovy,” while another slammed the negative comments.

“Good on you. I’m looking forward to another short trip to the country,” said one man.

“There’s a lot of whining. If you don’t like it, drive! That’s not supposed to be a luxury, it’s public transport!’ someone answered.

How many people will play League of Legends in January 2023?