Australian Test star Travis Head says he won’t apologize for his bat-throwing tantrum after a bad innings abroad after it aired on Amazon documentary series The Test.

Season two, which premiered on Prime Video this week, sees the new look of the Australia Test squad after Tim Paine stepped down as captain and features plenty of quirky visions of the playing squad. 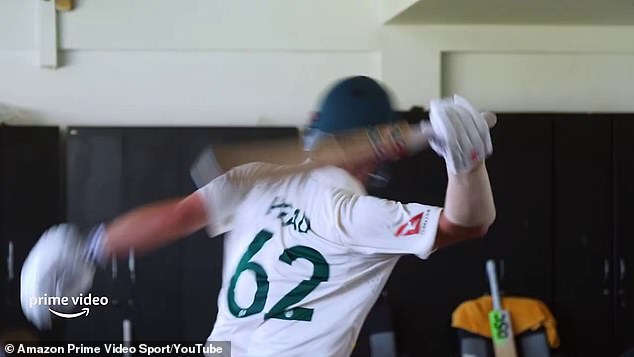 In a scene from Australia’s 2022 tour of Sri Lanka, Head hurls his racquet across the dressing room in a fit of rage after being dismissed cheaply.

Head’s record abroad is an average of 21.3 from seven Tests, which he’s eager to improve on next month’s tour of India.

While the vision captures the South Australian during one of his darkest streaks, he says it also illustrates the harsh reality of professional cricket.

“That’s the thing in the documentary, you turn and you see the camera in the corner and you’re like, ‘Oh shit,'” Head told News Corp.

“It came naturally. it’s raw I try not to do it too much but emotions go away and there are moments that you look back on and want to take back.

“I don’t really apologize for that. I’m there to play and play well and try to win cricket matches and try to do my best.’

The 29-year-old said he regretted busting his top at Cameron Green during the West Indies series in December when a communications mix-up resulted in a run-out that denied him a chance for a double century.

Head isn’t the only Australian star who’s been in the limelight for his bad mood.

David Warner, Steve Smith and Nathan Lyon are all shown in times of frustration, slamming doors, throwing equipment and cursing in anger.

Off-spinner Lyon openly criticizes Pakistani cricket for the shocking pitches he had to bowl on during last March’s tour.

“Officially the worst game I’ve ever been in,” said Lyon.

Warner hurls a water bottle against a wall and yells “F**k this” while Smith makes an explosive-laden tirade after running out of water due to a mistake by teammate Usman Khawaja.

Former Australian cricketers Michael Slater and Michael Bevan were known for their post-innings explosions, often damaging equipment and shouting in the dressing rooms.

Head will be hoping his form from the series against the Windies and South Africa continues on the subcontinent.

In the last two seasons on home soil, he’s averaged 57 with the bat and served as a handy bowling change when asked by captain Pat Cummins.

Cricket greats Michael Hussey and Greg Blewett believe Head is a cornerstone for the future of Australian cricket and a must for the upcoming India and Ashes series.

https://www.dailymail.co.uk/sport/cricket/article-11636323/Travis-Head-wont-apologise-brain-explosion-saw-throw-bat-dressing-room.html?ns_mchannel=rss&ns_campaign=1490&ito=1490 Travis Head won’t apologize for the brain blast he threw his bat across the dressing room