Donald Trump boasted to some of his closest allies that he has “intelligence” about French President Emmanuel Macron’s sex and love life, which he learned during his tenure as president, a new report reveals.

Two people with knowledge of the matter told Rolling Stone that Trump claimed to have learned about the dirt on Macron through briefings and looking at intelligence information, but they admit it was sometimes difficult to discern which information was genuine, because he was a gossip.

Macron, 44, has been married to his wife Brigitte, 69, since 2007. Brigitte, who is almost 25 years her senior, was Macron’s teacher before the two married. 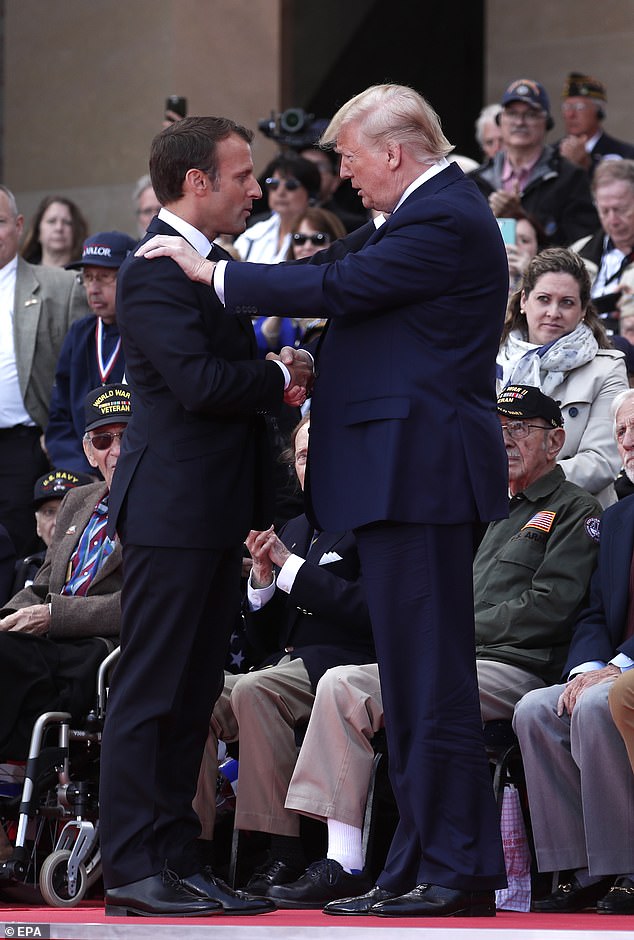 Donald Trump (right) boasted during and after his tenure that he had dirt on French President Emmanuel Macron’s (left) sex and personal life through “intelligence” he received as president. During the raid on Trump’s Mar-a-Lago estate earlier this month, the FBI found a document listed as “About: President of France.”

Macron has been married to Brigitte (left) since 2007. Pictured: Brigitte Macron with then First Lady Melania Trump (right) on November 11, 2018 in Versailles, France

Following the FBI’s raid on Trump’s Mar-a-Lago estate earlier this month, it released a list of the documents seized, including Item 1A, which listed “Info re: President of France.”

It’s not clear what was on that particular document, whether it contained classified or intelligence-collected information, or whether it had anything to do with Macron’s personal life.

Sources claim that Trump’s musings on Macron’s behavior lacked details or specifics and were rather general allegations of leaks.

A Trump spokesman did not immediately respond to a request from DailyMail.com for comment.

Stephanie Grisham, who once served as Trump’s press secretary, wrote in a memoir that Trump privately called Macron “a moron” and “a hundred and twenty pounds of rage.”

The former US president and French president had a volatile relationship that included a fallout during Trump’s tenure.

Brigitte, 69, is almost 25 years older than Emmanuel Macron, 44. They met when she was his teacher. The two are pictured April 24, 2022 after he won a second five-year term as president

In the 2017 French presidential campaign, Trump initially signaled support for Macron’s rivals, but that didn’t stop the French president from inviting the then-US president as a guest of honor at a Bastille Day parade in the same year of his re-election.

During a meeting of international ambassadors to the United Nations at the White House in 2019, Trump could be heard calling Macron a “pain in the ass.”

The revelation of the document on Macron shook France, two other sources familiar with the situation noted.

Trump opens up about Macron’s allegedly ‘naughty’ way that ‘[not] A great many people know,” added to concerns, urging French and US officials to find out what the former president had against him, the sources said.

In particular, they wanted to know whether the document constituted a violation of national security.

Macron’s romance with his now-wife began when he was 16 and started seeing his literature and acting teacher at a Catholic high school in Amiens, then Brigitte Auzière.

In his book and political manifesto Revolution, President Macron described the affair as “an often secret, often hidden love that is misunderstood by many before it prevails”.

Emmanuel Macron began attending his high school literature and drama teachers as a teenager. A 15-year-old Macron kisses his then 40-year-old teacher, then Brigitte Auzière, in a documentary about their unconventional relationship

Brigitte was married and had three children when she began an affair with her teenage student, Emmanuel Macron.

Their youngest daughter Tiphaine Auzière, now 38, said in a 2018 documentary that she was only nine when she found out about the affair and her father, André-Louis Auzière, moved out of the family home in Amiens to live in Lille to live.

Although Macron’s doctor parents asked Brigitte not to see him until he was 18, she said: “I can’t promise you anything.”

The two continued to see each other even after Macron’s parents sent him to Paris to continue his education. Brigitte finally divorced her husband in 2006 and married Macron in 2017.

The FBI searched Trump’s Mar-a-Lago home on Aug. 8 to retrieve documents and materials he took when he left the White House last year

This isn’t the first time Trump has become fixated on his rivals’ sexual and romantic relationships.

For example, when Josh Mandel and JD Vance were vying for Trump’s support in the Ohio Senate race, the former president called Mandel’s sex life “funny as a chap,” according to a February report.

The same source said Trump spoke about it [Mandel] and sex in the same sentence more times than I would have liked to hear.’

Grisham also wrote in her memoir that Trump pulled her aside on Air Force One after seeing Justin Trudeau on TV and made a blatant claim about the Canadian prime minister’s mother’s sex life.

During the 2016 campaign, Trump also gossiped about the relationship between MSNBC hosts Mika Brzezinski and Joe Scarborough just before it became public, according to a book by reporters covering the Trump presidency.

“You know, no one else knows about it, but I know about Joe and Mika’s little apartment on the Upper East Side,” he said. ‘One day I’ll tell you all about it.’