Trump mocks Biden’s handling of classified documents and warns ‘I have information on everyone’: Ex-president claimed files were ‘left in a heap on the damp floor of his ‘unsecured’ garage – while Mar-a-Lago was covered in cameras is and maintained by the secret service

Basking in the rising controversy over President Biden’s handling of classified files, former President Trump ominously claims to have “information on everyone.”

“The White House has just announced that there are no logs or information whatsoever of visitors to the Wilmington house and the weak, unlocked and unsecured but now very famous garage. Maybe they are smarter than we think!’ Trump reflected on “Truth Social.”

“This is one of what appears to be many places where highly classified documents are kept (in a big pile on the damp ground). Mar-a-Lago is a highly secured facility with security cameras throughout and is patrolled by staff and our awesome Secret Service. I have INFO about everyone!’ added Trump.

Amid growing calls for Biden to release the list of names who were at home and away during his presidency, the White House office said Monday there were no such records of names.

“Like every president in decades of modern history, his personal residence is personal,” the White House office told Fox News.

“But upon taking office, President Biden restored the norm and tradition of keeping White House visitor logs, including publishing them regularly after the previous administration ended them.”

“Without a list of those who visited his residence, the American people will never know who had access to these highly sensitive documents,” the Kentucky Republican wrote in his letter. 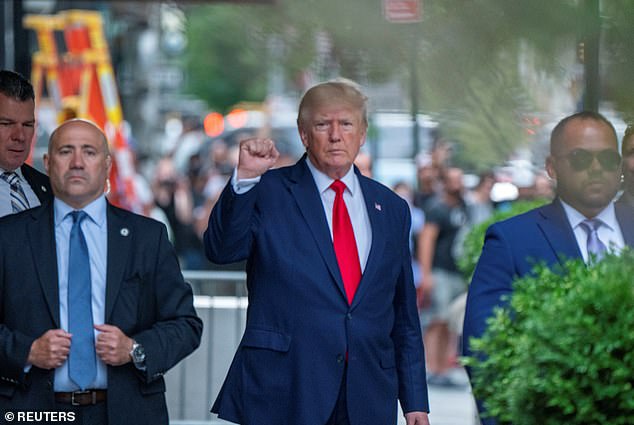 Last week, it was revealed that classified files had been found at both Biden’s Delaware home and his think tank’s Washington, DC office

The Penn-Biden Center was used by Biden as his personal office from around 2017 until the launch of his 2020 campaign.

Ten top-secret pages were reportedly found there by Biden’s personal attorneys when they cleaned up the office. So far, six have been found at his home in the Wilmington area.

The Justice Department has been investigating for months whether Biden mishandled the documents after leaving the vice presidential office.

Attorney General Merrick Garland appointed a special counsel to oversee Biden’s handling of classified documents after the papers from his vice presidency were first discovered at the Penn Biden Center on November 2, 2022.

Garland appointed a special counsel in November to oversee the investigation into Trump, including handling classified files.

The President has pledged to take the matter “seriously” and to work with the National Archives and the Justice Department at every step.

President Joe Biden’s White House announced that no public visitor logs were kept at his residence in Wilmington, Delaware

However, questions are still piling up about why it took the White House so long to admit the existence of the documents — which it did after CBS News first ran the story about the Penn-Biden Center — and who had access to the papers in Biden’s house.

Whether anyone with “foreign connections” had access to the documents, likely relating to the President’s son, Hunter Biden. Hunter’s overseas operations in China and Ukraine have been under scrutiny for years, and the US Attorney in Delaware is also investigating him for possible financial fraud.

Instead, she pointed out that the Biden administration has expanded transparency regarding White House visitor logs, which had been severely curtailed under Trump.

https://www.dailymail.co.uk/news/article-11641387/Trump-mocks-Bidens-handling-classified-documents-warns-info-everyone.html?ns_mchannel=rss&ns_campaign=1490&ito=1490 Trump mocks Biden’s handling of classified documents, warns ‘I have information on everyone’