Trump wanted to use a nuclear weapon against North Korea in 2017 and blame someone else, the book claims

According to a new book, former President Donald Trump has been even more combative towards North Korea in private meetings than in public — including talking about using nuclear weapons against the country and blaming someone else.

The US and North Korea were engaged in a tense and dangerous duel in 2017 when Trump spoke of unleashing “fire and fury” and threatened at the UN that the country would be “totally destroyed” if it were forced to save itself or its own defend allies. The remarks came amid a series of escalating tweets about North Korea.

According to a new book, Donald Trump vs. the United States, Trump made the nuclear threat at a meeting with top advisers, NBC reported.

That happened just days after Trump’s bombastic UN speech. The then-President’s statements unsettled his new chief of staff, General John Kelly, who pounced on Trump in his own memoir. 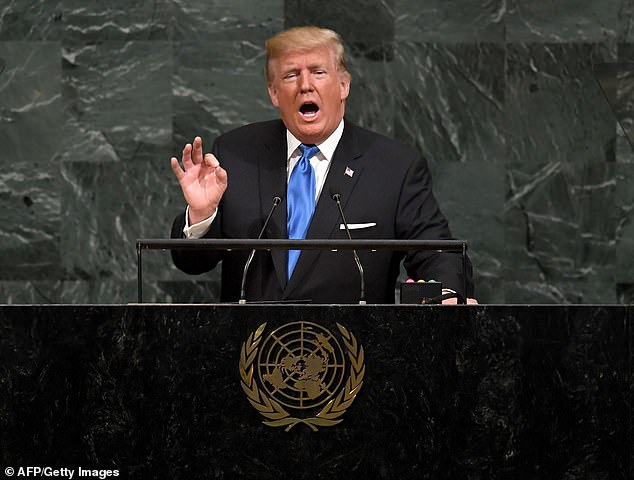 Former President Donald Trump spoke to advisers about North Korea’s use of nuclear weapons and trying to blame someone else, according to a new book

“What frightened Kelly even more than the tweets was the fact that behind closed doors in the Oval Office, Trump continued to talk as if he were about to go to war,” reads a foreword to the new edition of the book, published by the New York Times- Reporter Michael Schmidt.

“He blithely discussed the idea of ​​using a nuclear weapon against North Korea and said that if he took such action, the government could blame someone else to acquit themselves of responsibility,” the passage continued.

According to the report, Kelly, a retired Navy general, tried to push back and explain that the plan would not work.

“It would be hard if they didn’t point fingers at us,” he told the president.

A long-distance fight got personal, but ultimately resulted in what Trump called “love letters” from Kim

North Korea had best stop making any further threats to the United States,” Trump said in August at his golf club in New Jersey. “You’re faced with fire and fury like the world has never seen before…he was very menacing beyond a normal state. You will be met with fire, rage and, frankly, power unlike anything this world has seen before.’

Trump eventually visited North Korean dictator Kim Jong-un during his own visit to the DMZ and repeatedly boasted about “love letters” the men had exchanged. They were among documents reportedly discovered in Mar-a-Lago after Trump left the White House.

DailyMail.com has reached out to Trump’s office for comment.

https://www.dailymail.co.uk/news/article-11627923/Trump-wanted-use-nuclear-weapon-North-Korea-2017-blame-somebody-book.html?ns_mchannel=rss&ns_campaign=1490&ito=1490 Trump wanted to use a nuclear weapon on North Korea in 2017 and blame someone else: Buch

The Chicago Bears hire Kevin Warren, the "proven leader" of the Big Ten, as their President and CEO