In the same small town where police were ambushed by paranoid conspiracy theorists, two police officers were shot and a gunman is on the run – as a terrified local reveals, they saw “a bullet go right past me”.

Police are chasing a gunman after officers were shot at in the town of Tara, west of Brisbane.

No one was reported injured after shots were fired at a police car that smashed a window.

Officials have cordoned off an area in Tara and declared it a no-go zone, asking residents to say inside. 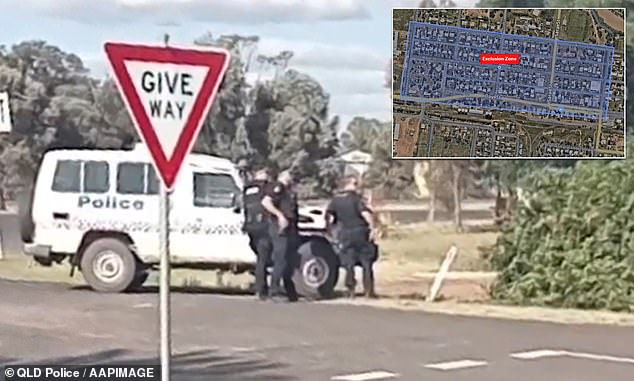 Tara is surrounded by police officers from Chinchilla, Dalby and other west Queensland stations as local residents reported missing bullets.

Local community representative David Maynard told Daily Mail Australia one woman heard “four low powered shots from a .22 rifle” while another said she saw “a bullet go right past me”.

Queensland’s Special Emergency Response Team is about to land in Tara by helicopter from Brisbane.

Tara was the home base of officers Rachel McCrow and Matthew Arnold, who were shot dead at the nearby Wieambilla estate in December.

The trio were later revealed to be doomsday preppers who believed in a mix of apocalyptic scenarios in which the government attempted to harm or control them.

Neighbor Alan Dare, who had come to help when he saw smoke coming from the property, was also killed by the trains before being shot dead by tactical police.

https://www.dailymail.co.uk/news/article-11647975/Two-officers-shot-town-Tara.html?ns_mchannel=rss&ns_campaign=1490&ito=1490 Two officers were shot at in the city of Tara

Escape From Tarkov Xbox One: Will the game come to console?