Ukraine claims it has broken through Russian lines in a major new counteroffensive in the south, while Kiev forces continue to attack invading forces.

Ukrainian military group “Kakhova” said it saw the “withdrawal” of pro-Russian separatist fighters from their positions in Kherson.

The Southern Military Command announced today that it has carried out the long-awaited maneuver, reflecting Kiev’s growing confidence as Western military aid flows in.

“Today there was a powerful artillery attack on enemy positions in … the entire territory of the occupied Kherson region,” Sergey Khlan, a local deputy and adviser to the regional governor, told Ukraine’s Pryamyi TV channel.

“This is the announcement of what we have been waiting for since the spring – it is the start of the de-occupation of the Kherson region.” 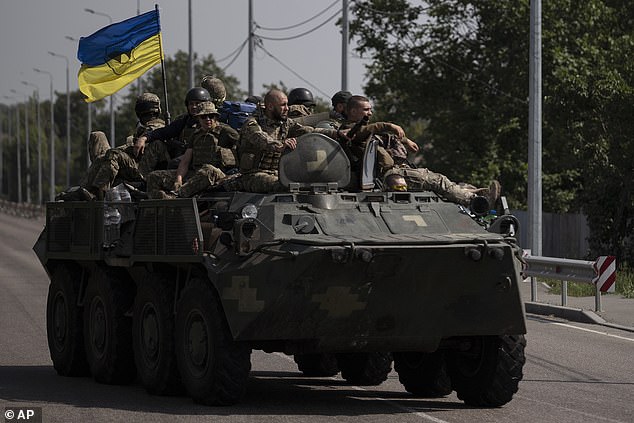 Ukraine has gone on the offensive and launched a counter-offensive to repel Russian forces in the south (pictured: Ukrainian soldiers in Donetsk yesterday).

Khlan said Ukrainian troops now have “the advantage” on the southern front.

Several strikes in recent weeks have targeted bridges in the region to hamper logistics for the Russian military.

In late July, Khlan said the region would be retaken by Kyiv’s forces by September.

Southern Command spokeswoman Natalia Humeniuk said that Ukraine’s recent attacks on Russia’s southern logistics routes had “undoubtedly weakened the enemy,” adding that more than 10 Russian ammunition depots had been hit in the past week.

However, she declined to give more details about the new offensive.

“Any military operation needs silence,” she said, adding that Russia’s forces in the south are “quite powerful” and have been built up over a long time.

Russia quickly captured parts of southern Ukraine near the Black Sea coast, including Kherson, in the early stages of the war, in stark contrast to its failed attempt to capture the capital, Kyiv.

Humeniuk said at a briefing on Monday that Ukraine had attacked more than 10 such ammunition depots over the past week, adding that they “undoubtedly weakened the enemy.”

She declined to give details of the counter-offensive, saying Russian forces in southern Ukraine remain “quite powerful”.

The governor of Russia’s annexed Crimea, Sergei Aksyonov, dismissed the announcement of a counter-offensive on Telegram as “another fake Ukrainian propaganda”. Crimea borders on the Kherson region.

The news came as a UN nuclear guard team traveled to Ukraine to inspect the Zaporizhzhia nuclear power plant, which was captured by Russian forces in March but is still operated by Ukrainian personnel and has become a flashpoint of the war.

Moscow and Kyiv exchanged accusations of bombing near the nuclear power plant, Europe’s largest and close to the war front, over fears of a radiation catastrophe in a country still reeling from the 1986 Chernobyl disaster.

The IAEA said the mission will assess physical damage, assess the conditions in which personnel work at the facility and “determine the functionality of safety systems.” It would also “perform urgent security measures,” a reference to the tracking of nuclear materials.

The Kremlin on Monday said the IAEA mission was “necessary” and called on the international community to put pressure on Ukraine to reduce military tensions at the factory.

The United Nations, United States and Ukraine have called for the withdrawal of military equipment and personnel from the nuclear complex to ensure it is not a target. But the Kremlin again ruled out clearing the site.

Faced with growing fears of a nuclear accident, Zaporizhzhia authorities are handing out iodine tablets and teaching residents how to use them in the event of a radiation leak.

Earlier, the Ukrainian military had reported shelling nine other cities across the Dnipro from the facility.

Russia’s Defense Ministry said its forces shot down a Ukrainian drone trying to attack the nuclear power plant, Russian news outlets reported. There was no serious damage and radiation levels were normal.

Reuters could not independently verify the reports.

Two of the plant’s reactors were unplugged last week due to shelling.

Ukrainian state-owned nuclear company Energoatom said it had no new information about attacks on the plant.

https://www.dailymail.co.uk/news/article-11156895/Ukraine-goes-attack-begins-long-awaited-counter-offensive-countrys-south.html?ns_mchannel=rss&ns_campaign=1490&ito=1490 Ukraine attacks and launches the long-awaited counter-offensive in the south of the country

Respawn is working on the Apex Legends badge rework