Family members of a violent felon accused of snatching billionaire heiress Eliza Fletcher have said the family is ‘f***ing wacky’ and they hope she is ‘still alive.’

Nathaniel Isaac, 69, said that Cleotha Abston’s mother is ‘in hiding’ after her son was arrested in connection with the missing mother-of-two.

Authorities arrested Abston, 38, on Sunday before charging him with especially aggravated kidnapping and tampering with evidence following Fletcher’s disappearance on September 2.

Isaac, who married into the family, told DailyMail.com: ‘She’s in hiding. That’s why she’s not here now. She’s very upset about what happened.

He says he barely knowns Abston, who spent 20 years in prison after being convicted of another kidnapping, but saw his brother Mario who has been arrested on unrelated drugs and firearms charges after a raid.

Police showed up at the building complex where the mother and uncle live in Memphis, Tennesse, and started knocking on doors hunting for family members.

Officers have footage of the vehicle used in the kidnapping, a black 2013 GMC terrain, in the same area 24 minutes before the mother-of-two was taken at 4:20am.

Surveillance footage obtained by police, which has not been released, show a man running ‘aggressively’ towards Fletcher, 34, and forcing her into the passenger side of the vehicle. 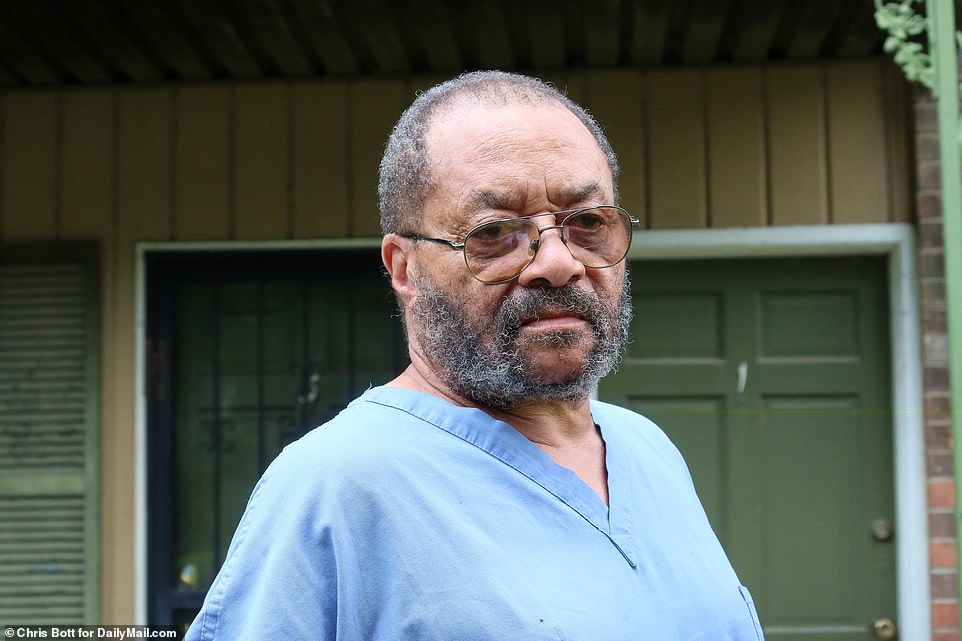 Nathaniel Isaac, 69, said that  his nephew Cleotha Abston had something to do with the mother-of-two’s dissapearance, telling DailyMail.com that he was ‘100% sure’. He added that he ‘hoped’ that Eliza Fletcher was still alive after vanishing while jogging on Friday

Eliza Fletcher, 34, was kidnapped after being forced into a black SUV on Friday. The driver of that SUV, Cleotha Abston, was arrested over the weekend

Officers have also been searching Martin Luther King Riverside park, as well as a pond within the area, and Pine Hill Park in relation to the missing mother

Fletcher was last seen about 4.20am on Friday, when she was jogging (right) in Memphis and a man approached her and forced her into an SUV after a brief struggle, police said

The pair struggled, and the car then sat in the parking lot for four minutes with Fletcher inside before driving off to an unknown location.

Officers have also been searching Martin Luther King Riverside park, as well as a pond within the area, and Pine Hill Park in relation to the missing mother.

Isaac added:  ‘My whole f***ing family’s wacky,’ he said. ‘They always have been. They’re not beloved to me because they’re nuts. It’s the truth. Go check the police records for the Abstons.

‘You’ll find they’re all perpetrators of something. My wife’s son stayed locked up. Mario is arrested now for drugs and carrying a gun. And Cleo, I’m 100 percent sure he had something to do with her abduction. Can I prove it? No.’

Cops were today searching another area in South Memphis in relation to the missing elementary school teacher, but several police cars have now left the area.

Abston’s arrest comes just over two years after her was released from prison where he served 20 years for the kidnapping and robbery of lawyer Kemper Durand in Memphis in May 2000.

Police tracked him down after finding his DNA on Champion sliders that were left behind during the struggle with Fletcher, as well as her cell phone and water bottle.

His bail has been set at $500,000, and it is understood that he is refusing to cooperate with police and tell them the location of the missing mother.

Police believe that Fletcher, a kindergarten teacher, suffered ‘serious injury’ at the hands of Abston and that blood was left in the vehicle.

His brother, Mario Abston, 36, was also arrested on Saturday after offices searched his home when his brother was spotted acting ‘suspiciously’ by neighbours.

Abston told police that his brother had been cleaning the interior of his GMC Terrain with floor cleaner, as well as washing his clothes in the sink of the house.

Another neighbour confirmed that Abston was acting ‘very strange’, and police determined that his phone pinged near to where Fletcher was taken.

This is the SUV cops say abducted Fletcher, identified as a dark-colored GMC Terrain which was discovered on Saturday

Authorities went to Abston’s last known address and found the same black SUV with the damaged taillight. The affidavit said Abston was standing in the doorway when police arrived and that he began to flee, but was soon apprehended.

Abston still has not said where Fletcher is or what he did to her. The affidavit said evidence, including blood, found in Abston’s car led them to believe Fletcher suffered a ‘serious injury.’

‘The investigation into the abduction of Eliza Fletcher is still active and ongoing. Investigators are continuing the search and following all leads,’ police said in a statement on Sunday after announcing Abston’s arrest.

Police were also seen searching dumpsters outside of a McDonald’s restaurant in Memphis on Saturday evening as they searched for the kindergarten teacher and mother.

Police sniffer dogs from the Shelby County Sheriff’s office working alongside search teams around a dumpster close to Mario Abston’s home. The dumpster was later hauled away by police

His brother, Mario Abston, 36, was also arrested on Saturday after offices searched his home when his brother was spotted acting ‘suspiciously’ by neighbours

After the discovery of the car, Fletcher’s family, her father, Beasley, mother, Adele, brother Gill and her husband appeared on camera alongside their lawyer, Mike Keeney

After the discovery of the car, Fletcher’s family, her father, Beasley, mother, Adele, brother Gill and her husband appeared on camera alongside their lawyer, Mike Keeney.

They have offered a $50,000 reward for any information that results in Fletcher being brought home safely.

In the statement, Keeney thanked the law enforcement for their search efforts and stated: ‘We believe someone knows what happened and can help.’

At this station, Fletcher’s husband became overcome with emotion.

Abston still has not said where Fletcher is or what he did to her. The affidavit said evidence, including blood, found in Abston’s car led them to believe Fletcher suffered a ‘serious injury’

On Friday, police had searched a park near the site where a wealthy heiress was abducted and forced into vehicle, as they search for clues in the baffling case.

A neighbour described Abston as a ‘pervert,’ who once snuck up behind her and propositioned her for sex.

He did the same to other women in the complex, and at times would sit in his black SUV gawking at women walking by or sitting on stoops.

Another neighbor, Latoya, 35, said the suspect also propositioned her and her 20-year-old niece earlier this year.

Latoya told DailyMail.com: ‘He kept waving me over to him and was like. ‘I’ve got $100.

‘He tried to catch my niece too, tried to get her to come into the apartment with him.

‘As far as I know, nobody here have sex with him,’ she said. ‘He creepy, he really creepy.’

https://www.dailymail.co.uk/news/article-11182585/Uncle-heiress-kidnapper-says-100-sure-nephew-linked-missing-teacher.html?ns_mchannel=rss&ns_campaign=1490&ito=1490 Uncle of heiress ‘kidnapper’ says he is ‘100% sure’ his nephew is linked to missing teacher

'It will happen again': Carlo Ancelotti is confident Real Madrid can repeat their Champions League exploits

Tracy Grimshaw is leaving A Current Affair: A look back at her 40-year career