Urgent warning to Australians over a cruel new scam that has stolen more than $2.6million from thousands of unsuspecting victims

By Adelaide Lang for NCA Newswire

Australians have taken to social media to warn of a nasty new twist on the ubiquitous “Hi Mum” scam that has stolen more than $2.6million from victims this year.

The “Hi Mum” scam was thrust into the spotlight earlier this month when police revealed scammers were exploiting vulnerable elderly Australians by posing as their children.

Once the scammers engage the victim in a text conversation, they usually request an urgent loan or payment, claiming that they do not have access to their own funds. 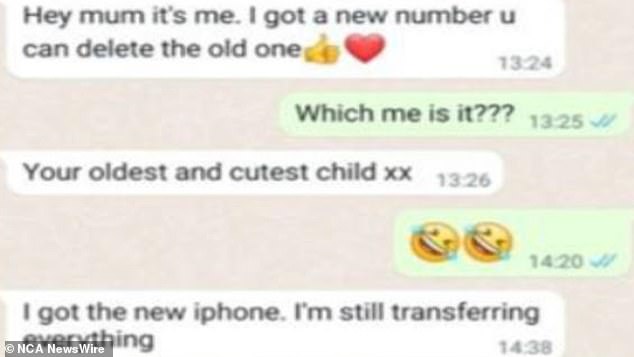 Users have flocked to social media to warn others about the new scam, which is manifested in a text from a parent asking for urgent help.

The family imitation texts shared online show that the messages in a conversation thread appear to have been sent by “Mom” or “Dad,” which is smarter and more persuasive than a text from a random number.

Messages received by suspected Aussies show the scammers introducing themselves as “Mum” or “Dad” before asking for money for groceries or petrol.

“I’m at the gas station and I took the wrong card. Can you send me 150 I’ll pay you back when I get home,” one fake parent wrote in a text, followed by bank details.

According to many recipients of the SMS, the “mom” or “dad” text message does not have a phone number attached, so replying or attempting to call the sender will reveal the lies.

Social media users are warning each other about a worrying new variant of the “Hi Mum” scam. Image: Facebook

A scammer was unaware of his audience. Image: Facebook

Authorities are urging Australians to beware of insidious text scams after victims reported losing $2.6 million in the first seven months of this year.

“We are warning Australians to be very cautious of messages from unknown numbers claiming to be from their children, parents, relatives or friends,” she said.

“Scammers will stop at nothing to get your personal information or money, and this particular scam is designed to break your heart.”

The ACCC is urging Australians to use other means of communication to reach the sender of the message or ask personal questions to determine their true identities.

“It’s important to stop and think when you receive a message, especially on WhatsApp, because chances are it’s not from your family member or friend – it’s a scammer,” Ms Rickard said.

“Above all, never send money without being absolutely sure who you are sending it to.”

The warnings come as Australians reported losing more money than ever at the hands of cunning scammers. Last year, residents lost a record $2 billion to various scams.

Police are urging anyone who has lost money to fraud to contact their bank as soon as possible and report the matter to the police.