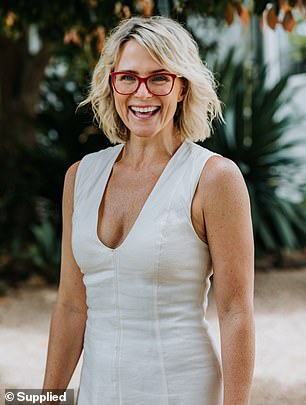 Elke Pascoe, the owner of Little Oak, risked everything to start her business but wanted to be able to provide babies with an alternative to cow’s milk formulas

The US formula shortage has caused a knock-on effect in global markets, according to an Australian manufacturer, who says the crisis could lead to supply issues around the world.

The shortage has been caused by major producer Abbott having factories closed and formula recalled after reports of serious bacterial infections in infants.

Abbott makes Similac, Alimentum,  EleCare and Costco’s home brand formula and is one of three companies including Mead Johnson and Nestle with a monopoly over the US infant formula market.

The recall was announced in February after investigations into hundreds of sick babies, and two deaths.

‘We were seeing parents buying 18 cans at a time when the shortage started,’ she said.

‘Some were panic buying it and others were buying it to send to the US.’

The shortage in the US has impacted formula markets globally, Elke explained

This led to an 80 per cent boost in sales and the need for temporary product caps to ensure no-one missed out.

‘We put a four can cap on them and have increased production so we can confidently make sure we can supply it to all of our customers.

‘After all, infant formula isn’t like a new set of sneakers –  in many cases it is the only nutrition these babies are getting.’

The brief period of capping orders gave her time to source more goat farms to have on standby in case of another sudden surge in demand of the important product.

Elke said the US market had been controlled by Abbott, Nestle and Mead Johnson for a long time, which led to the critical nature of the disaster.

‘Six months ago America stopped importing formula from Europe – the big brands pressured the FDA and government to get those competitors out of the market.

‘Now they need them but it is taking a while to turn the tap back on. Canada is also struggling because of this.’

So when there was a problem in one of the country’s major plants it meant millions of children were affected and at risk of going hungry.

Limits are in place across America, and even some Australian companies needed to cap purchases

‘There was also a recall for the Abbott products here in Australia – it just didn’t impact our market as much.’

‘We can see now that people are starting to buy baby formula for loved ones in the US like they have been for China.’.

The US problem has been solved in the short term by the government limiting the loopholes companies have to jump through.

‘The FDA has put in an accelerated process to help the country get through this in the short term, but that stops in November.’

Elke has had plans to move into the US market and will continue to follow the issue to see how it will impact her business growth.

She is furious that the children of America have been exposed to bacteria in their formula.

‘It is actually unforgiveable that a company that big has allowed this to happen,’ she said.

‘The tainted formula made them really unwell, they had stomach upsets, and were dehydrated as their tiny bodies tried to fight it off.’

Reports from the US claim health inspectors noticed there was risk of contamination at the plant in the weeks before it happened, but nothing was done.

‘The best thing to come of this is the opening of the US market – some of the best formula in the world is made here in Australia and New Zealand.

‘We are globally recognised as having better ingredients and manufacturing in the industry – and we have the capacity to step up and help US families.’

Elke started her company after both of her children had reactions to cow’s milk products as babies.

The busy mum-of-two risked everything to start her business after discovering goat’s milk to be more similar to human milk and less likely to trigger painful reactions in children.

The 41-year-old single mum revealed she poured her life savings, time and energy into the business but had to do it ‘for the children’.

Not just for her own kids, who now benefit from her goat’s milk kids range and knowledge around dairy allergies but for the babies that would continue to suffer.

‘Good nutrition shouldn’t just be for the wealthy families in the eastern suburbs,’ she said.

Her first product hit the shelves in 2018, and she couldn’t be more proud.

‘My lifelong dream is to make sure no child goes to bed hungry,’ she said.

This passion has driven her to make the best product possible, take a cut on margins and stay firm when people tell her she could make millions by adding a cow’s milk formula to her range.

‘People constantly try to tell me to chase the money on offer with cow’s milk formula, but I am not in this for my share of those billions, I want to make something that I would happily give to my kids.’

‘Sure we don’t make hundreds of millions of dollars – but we are damn proud of our product, and after all we are talking about babies and toddlers and they deserve us to do our best.’

She leaned on her former career in healthcare, pharmaceuticals and consulting to start the company, feeding her wage into her fledgling company and using contacts in the field to make sure she did everything right.

‘It is a very regulated industry, so I had to make sure we followed all of the rules while still making a new product that could make a difference,’ she said.

The company’s infant formula currently costs six times as much as their competitors’ to make, but is sold for the same price in store.

‘It isn’t about the margins, we are feeding the most vulnerable people in society, so that financial loss to us is a conscious decision because we won’t cut quality,’ she said.

‘It is critically important to me that everyone has aspect to food for their children, I don’t want to put a high-end price on my product so that people in need can’t afford it,’ she said.

Her son Charlie suffered from skin conditions as a baby, she looked at what he was eating after despairing over the dozens of creams doctors recommended she use on him

The youngster’s face is now clear – and according to Elke the family avoid cow’s milk and associated products, drinking goat’s milk at home

She now owns her own goat farm, in New Zealand, has about 8,000 goats across two properties and makes over 200tonnes of formula each year.

And she is constantly contacted by parents thanking her for helping them tackle their kid’s skin reactions and digestive issues at the source.

‘People will share pictures of their kids covered in eczema, or with suspended little bellies and dull eyes.’ she said.

‘Then follow up with a bright-eyed happy and healthy picture three weeks later. And it is a reminder of who we are doing this for when things get tough,’ she said.

Almost two years of research went into coming up with the formula, which is ‘as raw’ as possible.

This was on top of the years of research Elke did into why children often react to the formulas that saturated the market.

‘We decided on goat’s milk to make out formula, because we wanted something infinitely better, and the fats and proteins in it are more closely aligned to our own so it doesn’t need as much processing,’ she said.

Elke decided the best way to insure she had a lasting, high-quality supply of goat milk was to have a farm. These are some of her 8000 goats in New Zealand

‘For example taurine which is important for brain development is naturally occurring in goat’s milk, where as the additive they put in cow’s based formula is more closely related to Red Bull,’ she said.

‘I was shocked when I first found that out.’

The seeds for the business were planted by Elke’s eldest daughter, who after struggling to digest regular formula, was moved to a basic goat’s milk option.

‘She constantly had colic, a sore tummy and diarrhea, it was terrible,’ she said.

But it wasn’t until her second child was 18-months-old that the mum really started digging into the cause of his painful skin conditions and general discomfort.

‘I was constantly at the pharmacy, or the doctors, being told to buy more products to put on his skin to help him,’ she said.

‘When it dawned on me that I should be looking at what he is eating, not just adding another cream every time there was a new reaction.’

And when she looked into the ingredients in his baby formula she was left rattled.

‘From palm oil to multi-dexterin, it was packed with ingredients I wouldn’t want to give my child. And not just one formula but all of the formulas on the market,’ she said.

Seeing her sweet little boy in pain changed everything.

‘We now only have goats milk at home and it has made a huge difference,’ she said.

‘In fact when the kids stay somewhere else and are given cow’s milk they complain they are itchy and even break out,’ she said.

The mum explained that humans have been drinking goat’s milk for a thousand years, with cows milk becoming more popular in the last hundred years.

‘The reality is we struggle to digest it. Research shows that eight in ten Asian children are lactose intolerant,’ she said.

‘We also know that breast milk is different for each animal, on the human scale we have our own milk, then polar bear milk, whale milk and goat’s milk – way on the other end is cow’s milk,’ she said.

Little Oak now grows ‘at the same trajectory’ as Elke’s children, with age-appropriate snacks like cheese sticks and yoghurt being added to the range as they come on to her kids’ radars.

But the road to running a successful company, being up against big corporations hasn’t been easy.

‘Things were really financially tight for a while,’ she said.

‘I separated from my husband before I started so finances were a huge consideration.’

But Elke knew she had the opportunity to make the world better and end suffering for millions of children.

So she worked full time, prioritised putting food on the table and paying bills, before pouring the rest of her cash into Little Oak.

She spent hundreds of thousands of dollars on the company and ‘functioned on very little sleep’ to make her vision reality.

‘Being a parent helped me, in many ways, but mostly because you learn how to exist on very little sleep,’ she said.

Now her children are older, she has left her other job to concentrate on her company she faces a new set of challenges: stakeholders.

‘I wouldn’t do anything different, but I do take my hat off to all of the single working parents out there, it is a tough role to fill,’ she said.

https://www.dailymail.co.uk/femail/health/article-10877735/US-Abbott-formula-crisis-impact-Australian-mums-dads-kicks-panic-buying.html?ns_mchannel=rss&ns_campaign=1490&ito=1490 US Abbott formula crisis could impact Australian mums and dads as it kicks off panic buying