By Madeleine Ross For Mailonline

An American graffiti artist has been extradited to South Korea after being questioned about spray paint on subways.

The 27-year-old, whose name has not been released by South Korean police, is said to have broken into nine train garages with an Italian accomplice in September.

The man was identified using surveillance cameras and now faces up to three years in prison in South Korea.

Romanian police detained the man in November and he was extradited to South Korea on Wednesday to appear before Incheon District Court. 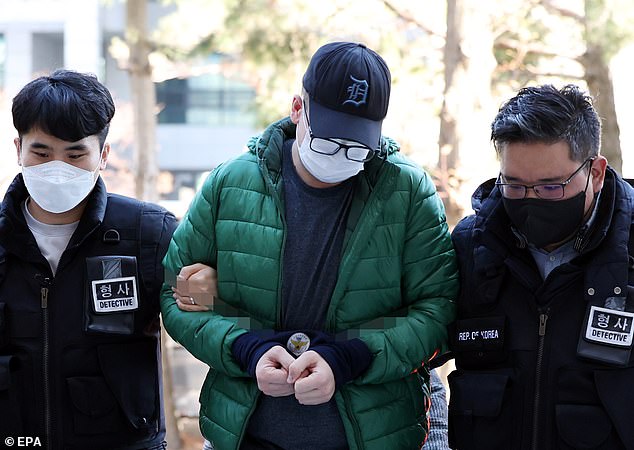 The 27-year-old American, whose name is not known to the police, faces up to three years in prison for spray-painting subway trains

Police began investigating after a subway operator filed a complaint about the vandalism.

The couple painted the outside of trains with words like “word,” “ride,” and “deny” on eight carriages in six regions of South Korea.

An Interpol Red Notice was issued to arrest the American after it was discovered he had left South Korea for Vietnam.

He was arrested by Romanian police in November and returned to South Korea on Wednesday. The man attended a hearing in the district court on Friday.

Police are still looking for his 28-year-old Italian accomplice.

The graffiti artist faces up to three years in prison and a fine of seven million yen ($5,674) under South Korean law.

It’s not clear if the case will go to court, but South Korea has previously convicted foreigners of spraying public facilities.

The couple broke into subway garages and painted the words “Speak Up” and “Deny” on the outside of trains.

South Korean authorities first became aware of graffiti after a university lecturer, Park Jung-soo, sprayed a rat on a G-20 poster in 2011.

This was deemed an insulting portrayal of then-President Lee Myung-bak, and Park was fined two million won (US$1,620).

In 2015, South Korean police found four Australian men spraying on the Seoul subway and said people could be prosecuted for criminal damage and trespassing.

Two British men from Manchester graffiti gang SMT were sentenced to four months in prison in South Korea in 2017 for painting subway trains in Seoul.

A couple sparked a huge debate after accidentally destroying a finished work by artist JonOne in 2021.

The $400,000 piece Untitled, which included brushes and paints, was on display at a mall where the Korean couple believed it was a participatory painting.

They were arrested but later released by South Korean police after it was determined they had no intention of damaging the artwork.

https://www.dailymail.co.uk/news/article-11657223/US-man-faces-three-years-South-Korean-jail-accused-spraying-graffiti-trains.html?ns_mchannel=rss&ns_campaign=1490&ito=1490 US man faces three years in prison in South Korea after being accused of spraypainting graffiti on trains

How to complete the League SBCs