Police today arrested dozens of vegan activists as they targeted Britain’s next Prime Minister Liz Truss after trespassing on dairies across the country.

Animal Rebellion protesters kicked off a second day of direct action at Arla and Muller processing plants on Monday as they punctured truck tires and filled pipes with expanding foam.

Another protest by the Extinction Rebellion offshoot took place outside the Queen Elizabeth II Center in Westminster, just hours before the Tory party’s new leader was appointed.

One man was searched by police before being arrested, while four others sat in the street opposite Westminster Abbey, holding signs reading ‘Plant-based Future’.

The vegan activists risked the wrath of the public after promising to continue their disruption until there was a “supermarket shortage” amid a cost-of-living crisis.

Filmmaker Joel Scott-Halkes, 30, from Cornwall said: “We will disrupt the dairy industry until there are shortages in supermarkets.

“We will do this until the government and the new prime minister comply with our demands.”

In a statement published online, an Animal Rebellion spokesman said they would throw the dairy giants into chaos “in the name of animal and climate justice.”

The vegan protesters, who are opposed to animal husbandry, yesterday forced the dairy giants’ trucks to stop before boarding them, while other companies entered facilities to scale milk silos and loading bays.

Five protesters remained at the Bridgwater site Monday midday as special officers were called into action after the eco-fanatics broke into the facility and locked themselves in objects. 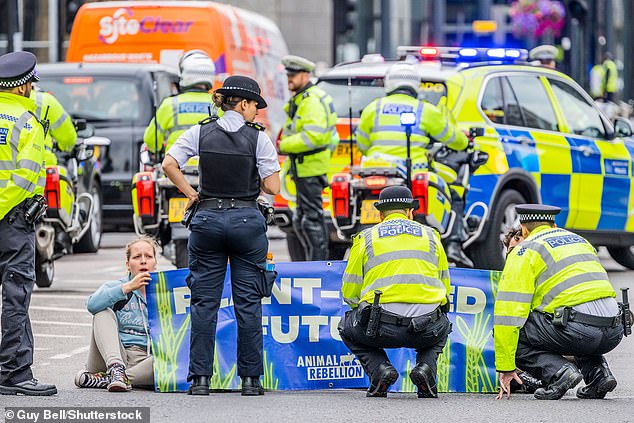 BRIDGWATER, SOMERSET: Activists from the vegan animal rebellion risked the wrath of the public after shutting down milk processing plants for a second straight day amid a cost of living crisis

WESTMINSTER, LONDON: Just hours before the appointment of the new Tory Party leader, another protest by the Extinction Rebellion offshoot took place outside the Queen Elizabeth II Center in Westminster

Joel Scott-Halkes, 30, a protester who took part in the sit-in in London, said today: ‘We will disrupt the dairy industry until supermarkets run out.

“We will do this until the government and the new prime minister comply with our demands,” he added, saying this includes ensuring the transition to plant-based agriculture and reclaiming the land that will be freed up as a result.

The protest group, an offshoot of Extinction Rebellion, admits it has defied a recent High Court injunction obtained by Arla to stop the protests.

Thames Valley Police (TVP) announced last night that they had arrested 23 protesters at the Arla site. MailOnline reached out to TVP for comment today.

Meanwhile, Gloucestershire Police said they arrested eight people at the Severnside Dairy site and the plant remained operational during the protest.

Animal Rebellion said its supporters will continue to take non-violent direct action until the government backs the move away from livestock and fisheries through a transition to a plant-based system.

The injunction Arla sought to stop the protests warned that if the action lasted two weeks, there would be “inevitable milk shortages on supermarket shelves”.

Arla yesterday said production was running normally, adding: “We have protesters at our Aylesbury site and are working closely with local police to resolve the situation.”

And Muller UK & Ireland added: “We are disappointed that we are being attacked by a small number of campaigners who do not represent the 96 per cent of adults in the UK who choose milk every week and we will ensure that the supply is maintained.

“Dairy products are affordable and full of nutrients that benefit our bodies. During a livelihood crisis, it is wrong to try to prevent it from reaching families.”

Deputy Chief Constable Dennis Murray of Thames Valley Police said: “The protest caused some disruption at Arla Foods premises and the A41 for a short time but has now been safely resolved with 23 arrests.

“Our response to the protest has limited our ability to effectively manage crime and protect vulnerable people across the Thames Valley.

Thames Valley Police respect the right to protest peacefully but will take action if protest activity harms others going about their lawful business.

At Arla’s Aylesbury site yesterday, the group stopped lorries and climbed to the top to stop the milk delivery

Animal Rebellion has faced criticism in the past from fellow vegans, who called the group’s actions “harmful” and “hypocritical” after milk was poured all over the floor at Harrods

“Those who commit crimes while protesting are always treated severely by Thames Valley Police.

“The protesters have now left the premises and patrols are continuing in the area.”

The group is calling on the government to “revitalize the land and ocean that has been freed up” and help farmers transition to a plant-based system.

Twitter users pointed out that the protesters – who also staged sit-ins at other supermarkets and cleared shelves of milk and dairy products – only “made a mess for the cleaners to clean up” and made it “dangerous for disabled customers”.

One said: ‘You haven’t hurt the dairy industry here, you’ve given them a big new order.

“You hurt the employees in the store (who may be fined for the cost of the new order), you hurt poor and insecure customers, you made it dangerous for disabled customers.

‘What’s wrong with you?’

Another said: “Why do you clowns always make trouble for the working class, never for your own?”

The group was even criticized by fellow vegans, who called their actions at Harrods “harmful” and “hypocritic”.

One account began the conversation by saying: “Am I the only vegan who was more concerned than impressed by the Harrods milk protest?

Other reports were quick to agree, with one saying they “didn’t get it” and it made “vegans look like idiots”.

Another report said: “The very idea of ​​this protest irks me. It’s hypocritical at best.’