A vegan woman found guilty of murdering her infant son from malnutrition was sentenced to life in prison on Monday.

Her sentencing in Lee County, Fla. had previously been delayed four times.

She showed no emotion when the sentence was read and told the judge she did not want to testify. 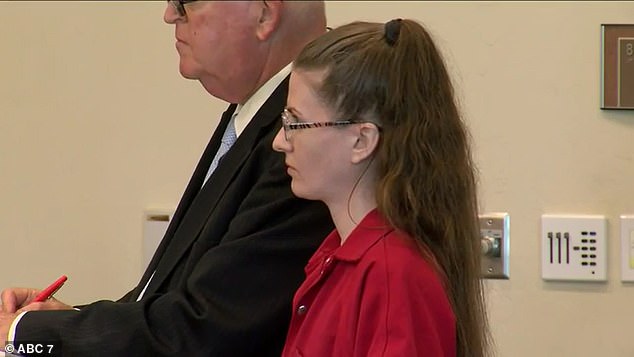 Sheila O’Leary will appear in court Monday for her conviction in Fort Myers, Fla

Mother of four, Sheila Leary is pictured above. Her 18-month-old son Ezra died in September 2019 from complications of malnutrition

Investigators said the couple, who lived in Cape Coral, told them the family only ate raw fruits and vegetables, even though the toddler was also breast-fed.

The 18-month-old boy weighed 17 pounds and was the size of a seven-month-old baby when he died in September 2019, according to a police report.

The couple had two other children, ages 3 and 5, who were also malnourished, investigators said.

A fourth child had been returned to her birth father during a previous malnutrition case in Virginia, court records show.

Doctors determined that Ezra had not been fed for a week before his death.

Sheila and Ryan, who have also been charged with murder and are awaiting trial, called 911 after Ezra stopped breathing.

Sheila O’Leary, 39, was convicted by a jury in Cape Coral, Florida in June after a week-long trial

Sheila and her 30-year-old husband Ryan have both been charged with murder after the 18-month-old man died. They admitted to police that they should have called 911 when Ezra started breathing again in 2019, but that they went to sleep instead

Paramedics pronounced the toddler dead at the scene. They also examined the couple’s three older children.

The pair were sued in December 2019 after Ezra’s cause of death was revealed.

No photos have ever been released showing what condition the child was in when he died.

But prosecutors at Sheila’s trial described an emaciated child who cried constantly.

“She chose to ignore his screams. She didn’t need a scale to see his bones.

The family home in Cape Coral, Florida, where the three children lived with their parents. The other children were taken into the care of the youth welfare office

The court heard how Sheila fed the kids mostly mangoes, bananas and avocados. Ezra was also breastfed. She will be charged on December 23, 2019

The couple also had a three-year-old and a five-year-old child who were severely malnourished.

Their skin was yellow and one had such poor dental hygiene that his teeth were black.

Sheila also has an 11-year-old daughter from a previous relationship, and her health has been significantly better than the other children’s due to spending time with her father in Virginia and eating well.

The three children were fed by their mother on a diet consisting primarily of mangoes, bananas, avocados and rambutans.

It’s unclear if they ever saw a doctor.

Ezra was born at home and had never been to a doctor.

According to police, the toddler had been breastfeeding on the day of his death when he started breathing.

Instead of calling for help, his parents say they went to sleep.

When they woke up, he had stopped breathing completely.

https://www.dailymail.co.uk/news/article-11158971/Vegan-mom-gets-life-murdering-18-month-son-weighed-17lb-died-strict-diet.html?ns_mchannel=rss&ns_campaign=1490&ito=1490 Vegan mother gets life sentence for murdering 18-month-old son who weighed 17 pounds when he died from a strict diet