Victoria Beckham was pictured leaving her Paris hotel on Saturday after putting on a defiant family display during her runway show the previous day.

The 48-year-old designer always looked chic in a sheer white tie-neck blouse, which she paired with a contrasting black mini skirt and matching tights.

She increased her height with matching heels, framed her face with oversized sunglasses and stashed her essentials in a small purse. 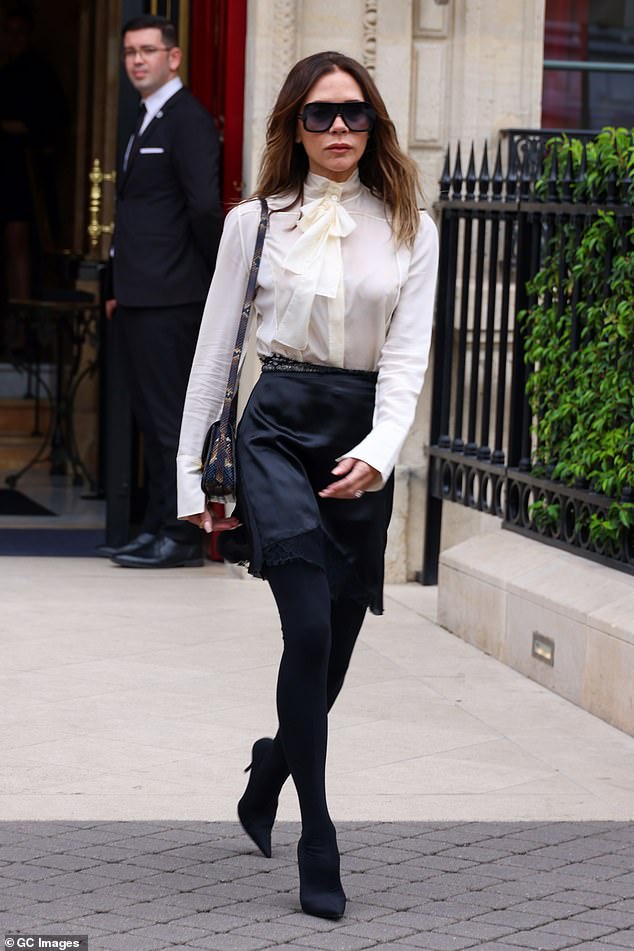 Emerging: Victoria Beckham was pictured leaving her Paris hotel on Saturday after putting on a defiant family display during her fashion show the previous day

The former Spice Girl put on a serious expression as she strutted away from the lavish establishment, wearing her walnut tresses in a center parting.

It comes after she was spotted chatting to her son Brooklyn outside of her show, while Nicola Peltz socialized with Cruz’s girlfriend Tana Holding as the family reunited amid feud rumours.

She had invited her eldest son Brooklyn, 23, and his socialite wife Nicola, 27, to her French fashion debut on Friday after rumors of a family feud surfaced.

The couple attended and arrived half an hour early to show their support, with “lots of hugs” as they were all reunited for the first time since this summer, a source in the room said.

Trendy: The 48-year-old designer always looked chic in a sheer white tie-neck blouse, which she paired with a contrasting black mini skirt and matching tights

Gorgeous: She increased her height with matching heels, framed her face with oversized sunglasses and stashed her essentials in a small purse

Here she is! The former Spice Girl attracted attention upon her departure

And video footage captured outside of the event shows Victoria laughing with her son Brooklyn while Nicola chatted with Cruz’s girlfriend Tana Holding and Harper Seven.

In the 30-second clip, Victoria looks glamorous in a form-fitting black dress as she chats to Brooklyn, who flashes a big smile while enjoying a drink.

During their eager conversation, a woman approaches Victoria, but she points to her son and instead continues their conversation, with the woman then walking away.

The mother and son then crowd towards Nicola, who looks the other way while chatting with Brooklyn’s sister Harper, 11, and Cruz’s model friend Tana.

Showstopper: The former Spice Girl put on a serious expression as she stalked away from the lavish establishment while wearing her walnut tresses in a center parting

Out of this world: She never fails to impress with her wardrobe choices

Brooklyn puts his hand on his wife’s back and holds her there as he continues talking to his mother as Nicola continues their conversation with Tana.

The footage ends with Victoria standing next to Nicola while Brooklyn stands behind his wife with his arm around her waist.

Brooklyn and Nicola – who arrived separately from the Beckhams – walked hand in hand as they exited the event, with the heiress looking lovingly into her husband’s eyes.

After entering Victoria’s highly anticipated runway show, the couple sat in the front row with Brooklyn’s father David, 47, and his siblings Harper, Romeo, 20, and Cruz, 17.

Reunited: It comes after Victoria was spotted chatting to her son Brooklyn outside of her PFW show, while Nicola Peltz socialized with Cruz’s girlfriend Tana Holding as the family got back together

Victoria couldn’t hold back her tears on Friday as she collapsed as she walked the runway at her Paris Fashion Week debut show – and hugged her husband David during the performance.

Afterwards, the family got together to celebrate with cocktails, as a source said, “There were lots of smiles and lots of love in the room, it was a lovely family atmosphere.”

Posing for a snap, Brooklyn and Nicola appeared in high spirits as they beamed while sitting alongside siblings Romeo and Harper, father David and Vogue’s Anna Wintour and Edward Enninful.

Victoria posted the snap to her Instagram as she gushed over the support, writing: “It’s Paris baby!! I am so grateful to my family, @BritishVogue and @VogueMagazine for always supporting me on this journey xx VB’.

Chatting: During their chat, a woman approaches Victoria, but she points to her son and instead continues their conversation, with the woman then walking away

Seeming delighted to be reunited with his family, Brooklyn hugged them on the runway as he reached down to cuddle youngest sibling Harper – before bringing it in with David too.

Nicola stood next to her husband and also hugged her father-in-law David as they performed together on the show.

The family appeared over the moon to welcome Brooklyn and Nicola to the show, despite a media storm surrounding the feud between Nicola and her mother-in-law, Victoria.

Crack: Reports of a feud between them were widespread, with Nicola adding fuel to the fire by claiming her mother-in-law “hid her out for days” during the design process of her wedding dress (pictured in September 2022)

Reports of a feud between Victoria and Nicola have been rife for weeks, with Brooklyn’s wife adding fuel to the fire in a Grazia interview.

The actress claimed that she was “hidden for days” by her mother-in-law in the interview during the design process of her wedding dress, and has reportedly infuriated her in-laws by “washing the family’s dirty laundry in public.”

Rumors of a rift first began when Nicola didn’t wear a Victoria Beckham wedding dress – which she said was her original plan during the interview, before being told the designer’s atelier couldn’t make her a dress.

In the bombastic Grazia interview, she revealed: “We connected to start designing the dress and then a few days went by and I didn’t hear anything. Victoria called my mother and said her studio couldn’t make it.

“There was a lot of love in the room”: But Victoria was reunited with Brooklyn and his wife Nicola at her show, and the couple were in attendance, even coming EARLY to wish her luck

But insiders have said Nicola is pushing a “false narrative” and leaving Victoria “confused” as to why she continues “stoking rumors of a feud” rather than shutting it down.

And Nicola, who tells her side of the story, has fueled even more family drama as David defended his wife Victoria when he had a rare confrontation with son Brooklyn.

According to MailPlus writer Alison Boshoff, David told Brooklyn, “We don’t do that in our family” when he “lost his temper” with the budding chef.

A source said: “I don’t think David has ever lost his temper on Brooklyn or had reason to speak harshly to him, but that’s finally happening now.

Emotional: Fashion designer Victoria was overcome with emotion as she walked the runway and held her head in her hands

https://www.dailymail.co.uk/tvshowbiz/article-11269661/Victoria-Beckham-departs-hotel-defiant-family-display-fashion-amid-feud-rumours.html?ns_mchannel=rss&ns_campaign=1490&ito=1490 Victoria Beckham leaves the hotel after a defiant family presentation at her fashion show amid feud rumours