An irate drinker who was thrown out of a village pub, stormed back and smashed an ax through a customer’s head has been convicted of attempted murder after a jury saw chilling video of the brutal attack.

Landscape gardener David Perry got into an argument with a family group at the 16th-century Bell Hotel in the picturesque village of Clare, Suffolk.

But after being thrown out, he grabbed the three-foot ax, ran back into the bar, and brought the sharpened blade down with a sickening swipe that split gardener Matt Cutts’ head open.

Mr Cutts, 32, who lives in the village, was felled and suffered a deep cut in his skull, and the jury at Ipswich Crown Court heard surgeons tell him he escaped death by a millimeter. 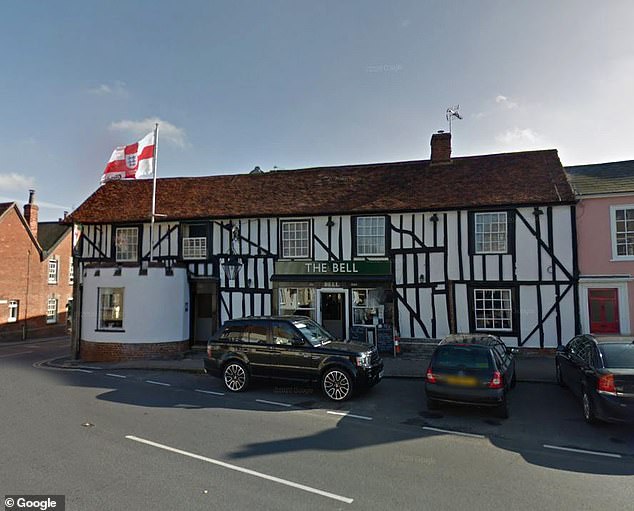 Landscaper David Perry is awaiting sentencing after being convicted of the attempted murder of Matt Cutts, whom he struck over the head with an ax during a row at The Bell in Clare, Suffolk

This is when David Perry, the top pictured, walks through the door and dashes into the bar with his axe

The court was told Perry, 40, who lives in Stradishall five miles from the village, had observed the family group laughing and joking in the pub.

He later told police he intervened because he thought a woman in the group was being harassed and taunted – despite her relatives telling him she was family.

But his intervention ended in a fight and he was kicked out of the pub – only to charge back minutes later, axe-wielding.

Witnesses reported that Mr Cutts did not have time to defend himself and was immediately struck down by the blow to the right side of his head.

Shocked staff and customers called the police and ambulance services and Mr Cutts was taken to Cambridge’s Addenbrookes Hospital for emergency surgery.

A surgeon later said he avoided permanent debilitating injury or death by millimeters.

Perry left the pub and drove around for several hours before going into a supermarket and telling a store clerk about his problems.

Det Con Jacqueline White, of Suffolk Police CID, said: “This was a cowardly attack and a frightening experience for the victim, family and everyone who witnessed the incident. He is very lucky to have survived.”

It took the jury more than eight hours to come to a 10-2 guilty verdict, and Perry will be sentenced by Trial Judge Martyn Levett next month.

Cindy Crawford, 56, spins in a $698 floral dress to celebrate the Malibu sunshine after weeks of rain