Virginia’s Attorney General has launched a probe into 11 schools across two districts after they failed to tell top students that they had received a National Merit award – claiming it could affect the youngster’s college scholarships.

It comes after an investigation into Fairfax County Public Schools was lodged by AG Jason Miyares after discovering that seven of their schools also failed to tell pupils of their awards.

Parents of pupils at the seven Fairfax County schools hit out after the revelations, claiming that the students were deliberately left in the dark, so other students ‘feelings were not hurt.’ 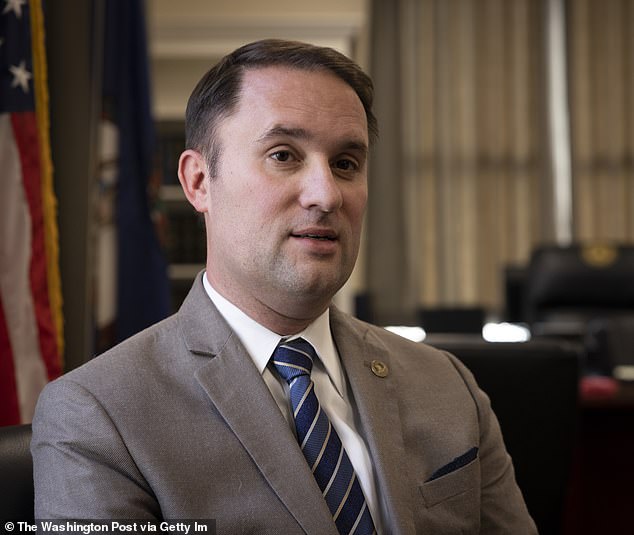 Virginia Attorney General, Jason Miyares, has now begun a formal investigation into the schools’ conduct and confirmed at a meeting he was also looking into Loudoun County

Families are furious that they were not informed of their children winning awards, with many protesting the schools’ decision to keep it quiet

The prestigious awards are only given to 50,000 of 1.5million high schoolers who score well on the PSATS – and can help students compete for scholarships, honors accolades, and college admissions.

Republican GOP Governor Glenn Youngkin slammed the decision made by the school as ‘maniacal,’ with the AG saying students have been punished in the name of ‘equity’.

The investigation is looking into the administration’s decisions to withhold the National Merit Scholarship honors from students and if it violates the Virginia Human Rights Act.

Receiving the honors can help with college admissions, and some parents accused the district of purposefully delaying notification of students because of racial bias.

After a meeting on January 10, Miyares said that he would also be looking into the way Loudoun County handled the scholars.

A spokeswoman for the AG said: ‘Attorney General Miyares is looking at every complaint and allegation regarding potential violations of the Virginia Human Rights Act at Northern Virginia high schools.

Loudoun County High School, which is run by Principal Michelle Luttrell, was reportedly never notified by the NMSC of the students who were Commended Scholars

Which Virginia schools are accused of failing to inform ‘commended pupils’ of their awards?

‘We encourage any student or parent who believes they have been discriminated against to file a complaint with our Office of Civil Rights on our website.’

Speaking at the same hearing, Smith added: ‘It’s important to note that there are two types of recognition students receive, Semi-finalist/Finalist and Commended Scholars.

‘I can confirm all LCPS National Merit Scholar Semi-finalists were notified, and appropriate procedures were implemented to assist in their scholarship applications this year.’

He added that the county’s Office of Student Mental Health will create an operating procedure to inform students of the award.

Smith, who got the job last year and previously worked in Fairfax and Page Counties, said that the process varies ‘significantly from school to school’.

A National Merit Scholarship Corporation spokesman said that any students who aren’t notified of the recognition by their schools could call the NMSC to check their status.

Loudoun County High School, which is run by Principal Michelle Luttrell, was reportedly never notified by the NMSC of the students who were Commended Scholars.

Principal Michelle Luttrell, who leads Loudoun County High School, is one of the top educators to become involved in the scandal

Freedom High school, run by Neelum Chaudhry (right) blamed the issues on a ‘human error.. While Principal Brandon Wolfe (left) has been urged to contact students at Potomac Falls High School to let them know about their awards

Once the school contacted the NMSC they learned that five students were commended, and they reached out to their families.

A ‘human error’ at Freedom High School – run by Neelum Chaudhry – meant that pupils did not receive the information, though leadership officials have since met with the recipients and are in communication with the universities they applied to.

Potomac Falls High School and Principal Brandon Wolfe have been urged to contact the commended scholars’ students before a recognition program later this month.

A fourth high school, which has not been identified, was found to not have notified students following a review on January 13 – though all students and parents who were not notified in 2022 have now been contacted.

It is the latest in a long line of scandals for notorious Loudoun County, who hit the headlines multiple times last year after school officials we accused of ‘looking out for its own’ after a teenage boy committed two sexual assaults at two different schools.

Former superintendent Scott Siegler was fired on December 6 after the allegations were made public and has been indicted by a Virginia grand jury after reports show he had ‘lied’ about the assaults.

Thomas Jefferson High School is America’s best-performing public school – with the schools insisting their decision is part of a new strategy meant to provide ‘equal outcomes for every student, without exceptions.

Last month, parents called for the axing of principal Ann Bonitatibus and Director of Student Services Brandon Kosatka – alleging they are responsible.

One mom at the protest, along with dozens of others, demanded ‘action’ against the pair be taken immediately.

The seven schools account for 25 percent of the high schools in Fairfax County, and Youngkin appeared angered by the school’s decision to act in such a manner.

Governor Youngkin criticized the Fairfax County Schools Superintendent for using taxpayer money to hire equity consultants and believes the issue is a systematic problem in the schools.

He said: ‘They have a maniacal focus on equal outcomes for all students at all costs. And at the heart of the American dream, is excelling, is advancing, is stretching and recognizing that we have students that have different capabilities.

Both West Potomac High School run by principal Tanganyuika Millard (right) and Edison High School, with Pamela Brumfield (left) as their principal have been affected by the probe

The decision by brass at Thomas Jefferson High School for Science and Technology in Fairfax, Virginia, was reportedly part of a new school strategy meant to provide ‘equal outcomes for every student, without exceptions’

‘Some students have the ability to perform at one level, others need more help, and we have to allow students to run as fast as they can to dream the biggest dreams they can possibly dream and then go get them.

Shawn De Rose, principal of Annadale High School sent out letters to parents regarding the issue

‘It impacts students’ ability to apply to college for scholarships, and in this idea of a golden ticket, as it is called, was withheld from them and it seems to have been withheld from them for the purpose of not wanting to make people feel bad who didn’t achieve it.

‘And all of a sudden, we see it spreading around to the rest of Fairfax County.’

He blamed Superintendent Dr Michelle Reid for hiring a $450,00 liberal consultant to teach the schools how to have ‘equal outcomes for all students.’

She has met with parents at Thomas Jefferson, Westfield, and Langley high school to address their concerns and says she is committed to being transparent with the results of their ongoing review.

During a meeting last week she said: ‘In each case, it’s my understanding principals sign certificates and pass those to staff who distribute them.’

The impact on students and their families can be significant, as some scholarships and grants can be worth over $90,000.

Last month, parents called for the axing of principal Ann Bonitatibus (left) alleging they are responsible. Langley High School Principal Kimberly Greer (right) is one of the educators also in charge of faculty embroiled in the scandal

Lewis High School (Robert. E. Lee previously named) is one of the seven schools account for 25 percent of the high schools in Fairfax County, and Youngkin appeared angered by the school’s decision to act in such a manner

It is not the first time officials with the Fairfax County Public School network – which encompasses 198 schools and centers – have come under fire for guidance touted as ‘progressive’.

In 2021, the school and its board found themselves in federal court after it changed its admission requirements to limit the number of Asian-American students enrolled to improve the chance of admission of other students regardless of academic ability.

Once again, billed as a means to boost equity, the guidance immediately sparked controversy for scrapping merit-based admissions – and was subsequently found to be against federal law.

Last February, a federal judge ruled Fairfax County school officials guilty of racial discrimination however, plans to overturn the woke rules have been put on hold thanks to a successful legal challenge by their supporters, with a court set to consider an appeal last this year.

The National Merit Scholarship Program (NMSP) is a scholarship program that recognizes and rewards academically talented high school students in the United States.

Among students taking the Preliminary SAT (PSAT) each year, about 50,000, or the top 3 percent, qualify for NMSP recognition.

About two-thirds of those 50,000 students are awarded letters of commendation, while the remaining third qualify as semifinalists and can apply for a National Merit Scholarship.

The Fairfax County schools say they failed to notify Commended Students of their status in a timely manner last fall.

Though Commended Students are not eligible for the scholarship program, the recognition is an academic honor and could bolster a college application.

Commended students are typically recognized by their high schools with a special ceremony, and could also gain an advantage in applying for other academic scholarships.

The program is administered by the National Merit Scholarship Corporation (NMSC), a not-for-profit organization.

Wolves agree a £4.4million fee for the Paris St-Germain and Spain winger