Virginia’s governor has proposed a new law that will bar schools from withholding information regarding students’ scholarship awards.

The prospective guidance was suggested by Gov. Glenn Youngkin in a televised interview aired Wednesday, amid public outcry over 16 schools’ decision to delay notifying students that they had received National Merit Awards – in some cases for up to two years.

A probe into the coverups, called by the state’s Attorney General, has been launched into the schools’ actions – which reportedly were part of a sprawling strategy from school officials to provide ‘equal outcomes for every student, without exceptions.’

Following AG Jason Miyares’ move to launch the probe into the schools, Youngkin announced his intent to create a law that would make it illegal for schools in his state to pull such a stunt again.

Scroll down for video: 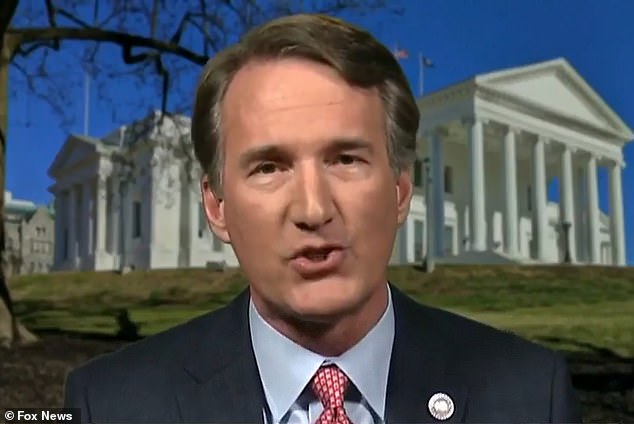 The prospective guidance was proposed by Gov. Glenn Youngkin in a televised interview aired Wednesday, amid public outcry over 16 schools’ decision to delay notifying students

Asra Nomani, one of the parents who was part of the effort unearthing these allegations against the Fairfax County Public School system, was one of several moms seen protesting the decision by schools in Fairfax, Loudon, and Prince William counties meant to pursue ‘equity’

‘There clearly is a real suggestion that their civil rights have been violated. And we need to understand what’s at the heart of this,’ Youngkin, 56,  told Fox News’ American Reports Wednesday, before announcing the new bill.

‘There’s clearly has been an effort to bring down the standards for our students in Virginia to stop celebrating excellence. And this is counter to everything we believe.’

Youngking, a vocal opponent of policies limiting parents’ rights in schools, slammed officials at Fairfax, Loudon, and Prince Williams counties for secretly implementing the strategy unbeknownst to parents – something the governor slammed as un-American.

The decision by brass at Thomas Jefferson High School for Science and Technology in Fairfax, Virginia, was reportedly part of a new school strategy meant to provide ‘equal outcomes for every student, without exceptions’

‘This nation was built on the idea of building a better future, of striving and achieving.

‘And here we have what appears to be three of three large school districts in Virginia who have been systematically withholding information about excellence.

‘This is so counter to everything that we believe.’

The governor proceeded to criticized what he called a ‘trifecta’ of problems currently affecting schools his home state, who he accused of succumbing to woke progressives with maneuvers that limit parent’s rights to make decisions for their children.

In that regard, Youngkin said school officials ‘have lowered their expectations.’

‘Virginia used to have the highest standards for treatment,’ Youngkin said, appearing increasingly impassioned as he spoke to Fox’s Sandra Smith. ‘And now we have had the lowest. We’re putting them back.’

The elected official aired his intent to leave such decisions up to the state – and more importantly, the parents.

‘But sadly, Virginia students met those expectations,’ he said. ‘Second of all, they pushed parents out of their students’ lives. And third, there has been a consistent cover-up in the relentless pursuit of equity.’

Staffers at the schools who withholded letters notifying students of scholarships defended the delays by saying they wanted to hand the letters out ‘discreetly,’ to avoid hurting the feelings of students who failed to garner a scholarship.

Families are furious that they were not informed of their children winning awards, with many protesting the schools’ decision to keep it quiet

Equity is a favored buzzword that describes a desire for all groups to garner equal opportunity, regardless of race or creed. Supporters say it helps those who’ve struggled to reach their potential because of societal racism and unfairness.

Youngkin criticized the actions of Virginia school districts who sanctioned the delays as ‘absolutely atrocious,’ saying they were carefully designed to ‘bring down the standards’ of excellence for students in America’s oldest state.

He called for increased transparency within schools over expenditures, after it was revealed that school officials in Fairfax – where the allegations first surfaced last month – sought an equity consultant who allegedly suggested the delays as to ‘not hurt students feelings.’

‘There should be full transparency in these kinds of expenditures, particularly when they’re teaching and training a methodology and a belief system that is so counter to excellence, so counter to making sure that students are allowed to achieve and do their best,’ he said.

Last month, parents called for the axing of principal Ann Bonitatibus (left) alleging they are responsible. Langley High School Principal Kimberly Greer (right) is one of the educators also in charge of faculty embroiled in the scandal

‘Again,’ he added ‘it is such an anathema to everything we believe.’

The allegations first surfaced at Thomas Jefferson High School for Science and Technology in Fairfax, Virginia, where officials implemented the school strategy to provide ‘equal outcomes for every student, without exceptions.’

Virgina mom and author Asra Nomani, whose son merit scholarship was withheld for an astounding two years, blew the whistle on school’s actions last month, and it has since been gleaned that officials in 15 other schools did the same.

Nomani was seen at the procession outside the school eaerlier this month, along with dozens of others, demanding that action be taken woard officials who decided to keep parents and students in the dark.

‘Let it be known that we are not for fake meetings – we are for real action,’ Nomani said, visibly irate over the school’s decision to keep the awards under wraps.

Nomani, the first to break the story on the allegations against Fairfax County – and now Loudon and Prince William county  – said Thomas Jeffors Director of Student Services Brandon Kosatka admitted to her in November that the approach to withholding students’ academic honors was intentional.

Nomani said the director owned up to the allegations when she him about it by phone asking why her son had not received a letter until that point.

The principal was apparently not available for the query, leaving Kosatka being the one to field it.

Which Virginia schools are accused of failing to inform ‘commended pupils’ of their awards?

When questioned, Kosatka explained the school’s side – syaing staffers had wanted to hand the letters out ‘discreetly’ to avoid hurting the feelings of students who failed to garner the distinction.

‘There’s not a lot of kids who didn’t get either award, and we didn’t want them to feel bad about it,’ Nomanic redited Kosatka as saying.

Announcing the probe this week, Miyares condemned the schools’ actions as the state launched an investigation over alleged Anti-Asian bigotry.

Miyares told Fox Business Tuesday that in Fairfax, the district paid an equity consultant $450,000 to ensure ‘equal outcomes no matter what, even if it means treating some students purposefully unequally.’

He added: ‘You hear the word equity all the time. Equity without excellence is actually emptiness. It doesn’t really help the student at all. It actually divides us.’

The National Merit awards are only given to 50,000 of 1.5million high schoolers who score well on the PSATS – and can help students compete for scholarships, honors accolades, and college admissions.

The state’s investigation is looking into the administration’s decisions to withhold the National Merit Scholarship honors from students and if it violates the Virginia Human Rights Act.

Miyares said that one mom in the Fairfax School district lamented that her daughter had done everything right since the first grade to excel academically.

‘She studied so hard, and now she’s realizing she may not go to the school of her dreams because of who she is, a Korean American,’ Miyares said. ‘That goes against everything we believe in this country.’

The school is America’s best-performing public school – with the district officials insisting their decision to change their admissions standard was part of a new strategy meant to provide ‘equal outcomes for every student, without exceptions.’

The Attorney General said that just one year after the change, the high school saw ‘close to a 20-point drop in Asian American enrollment.’

Miyares noted that what was happening in Virginia is reflective of the alleged discrimination Asian American applicants were seeing across the country, as the Supreme Court weighs on the future of affirmative action at colleges.

‘It seems as though the only state- sanctioned form of bigotry in America is anti-Asian bigotry, and we want to make sure that’s not happening in Virginia,’ he said.

Along with the Charles Colgan High School, about 16 students were affected in the county

The National Merit Scholarship Program (NMSP) is a scholarship program that recognizes and rewards academically talented high school students in the United States.

Among students taking the Preliminary SAT (PSAT) each year, about 50,000, or the top 3 percent, qualify for NMSP recognition.

About two-thirds of those 50,000 students are awarded letters of commendation, while the remaining third qualify as semifinalists and can apply for a National Merit Scholarship.

The Fairfax County schools say they failed to notify Commended Students of their status in a timely manner last fall.

Though Commended Students are not eligible for the scholarship program, the recognition is an academic honor and could bolster a college application.

Commended students are typically recognized by their high schools with a special ceremony, and could also gain an advantage in applying for other academic scholarships.

The program is administered by the National Merit Scholarship Corporation (NMSC), a not-for-profit organization.