Volocopter has successfully completed the maiden flight of its first full-size, all-electric VoloCity air taxi, which it claims could transform urban travel.

The vertical takeoff and landing vehicle, which looks like a giant 18-rotor drone, took off from Pontoise airfield near Paris, France, on a chilly December morning.

In a video of the flight released this week, it appears as stable as a regular helicopter, hovering above the ground for just a minute before gently landing back on the grass.

The German company says it wants to “become Boeing, Lufthansa and Uber, but in a single company.”

The VoloCity air taxi is expected to be operational in time to provide passenger services at the 2024 Paris Olympics. 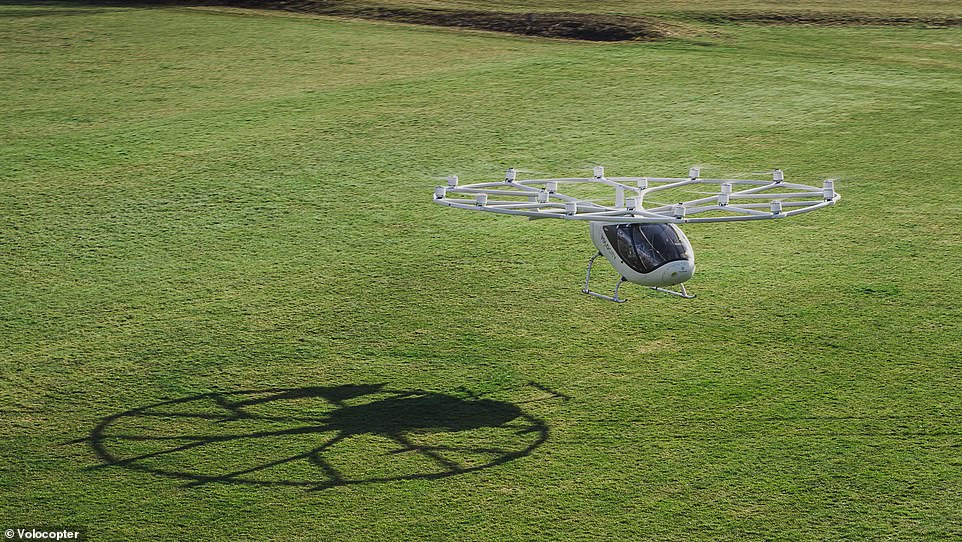 The vertical takeoff and landing vehicle, which looks like a giant 18-rotor drone, took off from Pontoise airfield near Paris, France, on a chilly December morning

Despite the large number of rotors, Volocopter claims that the VoloCity is four times quieter than a conventional helicopter, making for a smoother ride

A total of two routes will be available for sports fans at the 2024 Olympic Games:

“Today we celebrate a remarkable achievement: the culmination of our quest to create a brighter future, where electric aircraft and zero-emission flights are the new dimension of global mobility,” the company said in a blog post.

“As Volocopter rolls towards this new frontier, city flights will be just a few smartphone clicks away.

“These moments show how our pioneering spirit brings our vision to life before our eyes. And that’s exactly the boost we need as we enter the final leg of the race to commercial launch.’

Volocopter first presented its VoloCity concept in 2015. Since then, numerous prototypes of the aircraft have been developed and 1,500 test flights have been conducted.

However, the company has now settled on what it calls the “final configuration of the aircraft”.

“It’s a whole new aircraft design, it’s a new system, it’s all electric, it has 18 rotors, it’s something the world hasn’t seen before. Therefore, much more interaction with the European Union Aviation Safety Agency (EASA) is required,” she explained.

The full-size electric vertical take-off and landing vehicle (eVTOL) can carry two people and be flown autonomously, remotely, or by an onboard pilot.

It has a top speed of 68 mph and a range of 22 miles, making it good for short city hops.

Despite the large number of rotors, Volocopter claims that the VoloCity is four times quieter than a conventional helicopter, making for a smoother ride.

The company has received approvals to fly in manned or unmanned configurations for test flights in cities including Hamburg, Dubai, Helsinki and Singapore.

VoloCity can carry two people and be flown autonomously, remotely or by an onboard pilot. It has a top speed of 68 mph and a range of 22 miles, making it good for short city hops

According to those responsible, the ultimate goal is to create at least two flight routes in order to reduce congestion during the summer games.

“With the 2024 Olympics approaching, mastering these new technologies and applications in a densely populated area like the Paris region is not an option, but a must,” said Alexandra Dublanche, vice president of the Ile-de-France region.

The first flight path will be between the Paris-Issy-les-Moulineaux heliport and Saint-Cyr aerodrome, the second between Paris-Charles de Gaulle and Le Bourget airports and the city of Paris, at a location to be determined.

The Pontoise test site is located at the Cormeilles-en-Vexin aerodrome and is tested by around 30 manufacturers.

In addition to Volocopter, these include Airbus, Vertical Aerospace and Ascendance as well as Lilium and Joby Aviation.

Volocopter hopes that if the Paris Olympics are successful, it could convince regulators in other countries to give the green light to city taxi services.

WHAT ARE VOLOCOPTER’S MAIN COMPETITORS?

The European aircraft manufacturer Airbus has been working on an air taxi. It was first called Vahana (pictured) but has now been merged with a different design and renamed CityAirbus Nextgen

Volocopter faces stiff competition from several other companies fighting to be the first to have a publicly available flying car for use in the sky:

The Slovakian mechanical engineering company AeroMobil has developed what it says is the world’s first four-seater air taxi, called AM NEXT, which is half super sports car, half light aircraft.

The vehicle is scheduled for launch in 2027 and, according to the company, can switch between modes in less than three minutes.

AeroMobil hopes the AM NEXT will save commuters “significantly” time when traveling distances of 100 to 500 miles between major cities.

European aircraft manufacturer Airbus had been working on a driverless air taxi called the Vahana, with plans to initially have a pilot and later be autonomous.

Later the design for it was merged with another eVTOL and the urban air taxi was renamed CityAirbus Nextgen.

This vertical takeoff and landing (VTOL) aircraft, named Kormoran, can carry 1,000 pounds over 31 miles, allowing it to deliver supplies to war zones and evacuate wounded soldiers to safety.

In 2020, Urban Aeronautics has partnered with Singapore-based Ascent to accelerate commercialization of the CityHawk, a hydrogen/electric VTOL aircraft that succeeded the Cormorant.

German tech company Lilium Aviation is working on a two-seat plane that will take off vertically with 36 electric fan engines arrayed along its wings.

The egg-shaped plane, dubbed Lilium, has been announced high up, as has the European Space Agency (ESA), emphasizing its environmental benefits and not having to land at an airport.

The Chinese drone manufacturer EHang has conducted flight tests with a person-carrying drone in Nevada.

Terrafugia, based in Woburn, Massachusetts, is working on a “flying car” called the TF-X — a car with folding arms and rotors for vertical takeoff and landing

The vehicle is a four-arm cockpit equipped with a total of eight rotors.

The company says the 184 is autonomous, so all the passenger has to do is enter their destination into the smartphone app, sit back, and the drone takes over.

EHang 184 could be ready in the coming years.

Terrafugia, based in Woburn, Massachusetts, is working on a “flying car” called the TF-X — a car with folding arms and rotors for vertical takeoff and landing.

The TF-X is still in development and a launch date is still unclear.

Fascinating book of vintage photo postcards reveals life in the U.S during the early 20th century

Molly-Mae Hague is spending £12,000 on furniture for her £4million mansion