By Jamie Phillips for Mailonline

Welsh players sported a rainbow sleeve in a defiant stand during their warm up ahead of the Iran game at the Qatar World Cup.

Captain Gareth Bale led the way as all 26 players wore a white shirt with multicolored stripes on each shoulder ahead of the game.

As the players returned through the tunnel, they later reappeared for the deciding game in their regular red gear with white stripes down each sleeve.

Wales survived an early shock after Iran took the lead in the opening minutes but VAR intervened to rule out the offside.

The warm-up tops come after FIFA threatened a number of European nations with sporting sanctions if their captains go ahead with plans to wear the OneLove armband during their opening matches. 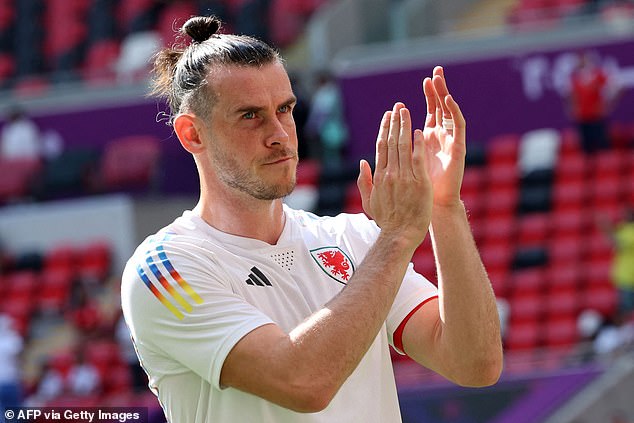 The associations of England, Wales, Belgium, the Netherlands, Switzerland, Germany and Denmark said on Monday they had been pressured by FIFA, which had threatened to issue yellow cards to any player wearing the multicolored armband .

The media director of the German Football Association, Steffen Simon, told Germany’s Deutschlandfunk that England, who had been expected to be the first team in Monday’s game against Iran, had been threatened with several sporting sanctions to prevent them from making the gesture to make support of LGBT+ rights.

The threat caused all seven countries to abandon the plans.

Homosexuality is illegal in the Gulf state and is punishable by up to seven years in prison.

https://www.dailymail.co.uk/news/article-11468723/Wales-wears-RAINBOW-sleeve-defiant-stand-Qatar-World-Cup.html?ns_mchannel=rss&ns_campaign=1490&ito=1490 Wales wear RAINBOW sleeves on the defiant stand at the World Cup in Qatar

Chris Moyles reveals that during his time on I'm A Celeb he achieved the 1.5. has lost space