A woman driver has been found guilty of driving without due care and attention after video footage emerged capturing her nail-biting near miss with a cyclist at a busy Northampton roundabout.

Lucy World, 32, from Far End in Northampton, was recorded on a cell phone strapped to the bike’s handlebars on January 7 last year while she was riding without due care and attention.

In December she was ordered to pay more than £1,100 in fines and costs and was given five points on her driving licence.

Footage shows her Ford Fiesta appearing out of nowhere and speeding past the cyclist, forcing him to avoid her. The vehicle was inches from the bike as she passed it on the outside of the roundabout. 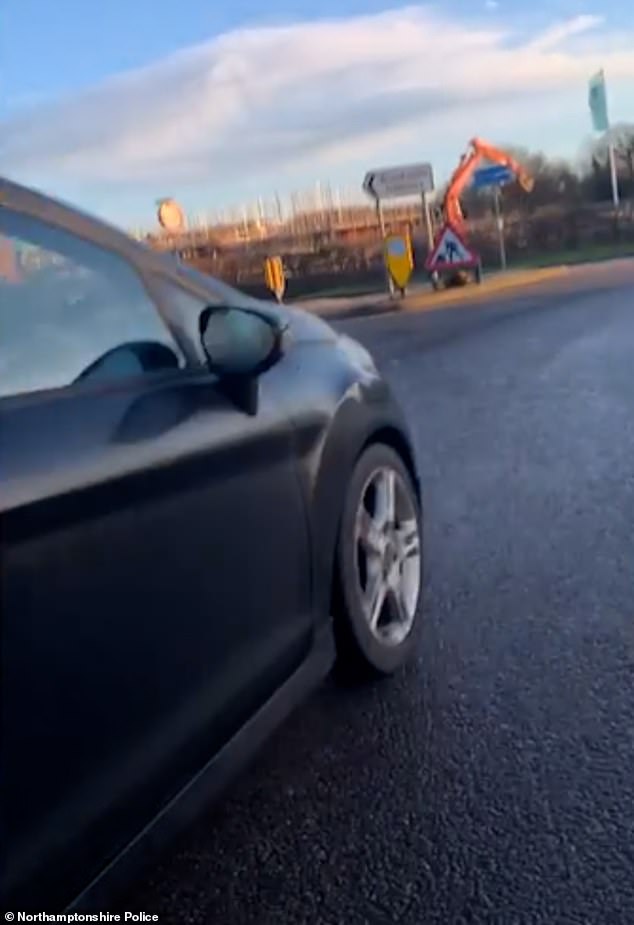 Lucy World, 32, from Northampton, appeared to cross the cyclist and then drove away, unaware of the incident

Just before 8.50am on the day of the incident, the cyclist pulled into the Wooldale Road roundabout in Northampton.

Suddenly a black Ford Fiesta crossed him as he was leaving the intersection with Newport Pagnell Road.

World appeared to slice through the cyclist’s front, nearly colliding with him, forcing him to swerve and brake.

Fortunately, a collision was avoided and the cyclist was unharmed. World then drove away without admitting the incident.

The footage was submitted to Northamptonshire Police Force’s Operation Snap, which was set up to allow the public to easily submit evidence and reports of driving offences.

The force can investigate a number of potential offenses through deployment, including dangerous or careless driving, using a cell phone while driving, failing to wear a seat belt, failing to stop at a red light, crossing solid white lines, and offenses where a driver fails to attend proper control of a vehicle.

The footage was uploaded to Force’s online portal and upon review by law enforcement officers, the video proved beyond a reasonable doubt that World had shown no regard for the other road user.

World was given a fixed sentence but chose to plead not guilty and then failed to appear in court.

On December 14, she was found guilty in Northampton Magistrates’ Court on Wednesday of acting without due care and attention in a charge of driving.

Driver Lucy World has been ordered to pay fines and court costs totaling more than £1,100

Following the court’s guilty verdict, World received five points on her driving licence, a £440 fine and £625 in costs and a £44 victim’s surcharge.

PC Mo Allsopp-Clarke, from Northamptonshire Police’s Safer Roads Team, said: “The video evidence clearly showed that World had no regard for the cyclist who had the right of way at the roundabout that day.

“Your driving fell below the standard of a competent and careful driver, which could very easily have led to tragic consequences, and I am pleased that the courts have treated the driver favorably.

“Hopefully this case shows that we take all cases of bad driving very seriously and are prosecuting perpetrators appropriately, which can only be a good thing in making our roads safer.”

Individuals can report traffic violations by uploading video evidence through a simple online portal on the Force website and filling out a form that automatically generates witness statements to provide a full account of the incident.

The reports are then reviewed by trained police personnel, who review the footage to ensure it falls within the program’s remit and includes clear views of an offender’s license plates so they can be identified.

If it meets Operation Snap criteria, police officers from the Safer Roads team examine the footage. If a traffic violation is detected, legal action may be taken.

The team has only 14 days to investigate violations and the public is asked to submit their videos as soon as possible after the incident to allow maximum time for footage review.

They are told to be prepared to testify in court should the need arise and the footage is not to be uploaded to social media.

Anyone submitting footage through Operation Snap can find out the outcome of their submission by following the link in their confirmation email, which will take them to a monthly update.

https://www.dailymail.co.uk/news/article-11626709/Watch-reckless-motorist-nearly-hits-cyclist-denies-driving-without-care-attention.html?ns_mchannel=rss&ns_campaign=1490&ito=1490 Watch as a reckless motorist almost runs over a cyclist and then refuses to drive without due care and attention

Skillful trio of thieves snatch a $40,000 ring right under the nose of Santa Clarita shopkeeper