Waymo is rolling out its driverless robotaxi service in Phoenix for members of Alphabet’s own company’s “Trusted Tester” program — but users can’t share their experiences on social media and have to sign a non-disclosure agreement.

The company calls these rides “drivers only” to signal that no one is behind the wheel and the people who call them out are being driven around downtown Phoenix in a Jaguar I-Pace EV.

Trusted testers are prohibited from sharing their experiences on social media or with journalists and are required to sign a non-disclosure agreement. 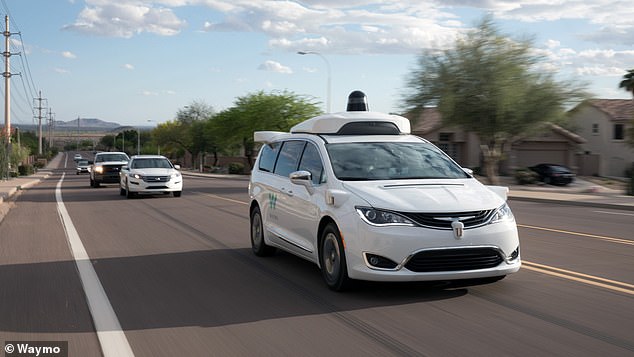 Back in May, Waymo co-CEO Dmitri Dolgov said at a TechCrunch event that the company had begun allowing its own employees to call in driverless rides in downtown Phoenix.

Waymo has been allowing residents to apply to become trusted testers since 2017, but the service still had human safety-at-the-wheel staff until October 2020, when the driverless effort officially launched.

The fully driverless service today covers the East Valley, which includes portions of Chandler, Gilbert, Mesa and Tempe. There have already been more than 100,000 rides.

Phoenix Mayor Kate Gallego shared her experience Monday with the service: “I had the opportunity to take my first driver-only drive with #WaymoDriver @Waymo’s fully autonomous driving technology. Phoenicians, I can’t wait for you to experience it for yourself! Check out the Waymo One app to learn more.”

Waymo’s fully driverless service today covers the East Valley and includes portions of Chandler, Gilbert, Mesa and Tempe. There have already been more than 100,000 rides

The company currently has over 700 vehicles in its fleet, including a mix of Jaguar I-Pace EVs and Chrysler Pacifica hybrid minivans and Class 8 trucks.

Most of these vehicles are located in Arizona, California and Texas – and are used in test and commercial operations.

This new effort with trusted testers in downtown Phoenix is ​​the next step ahead of a wider public release, but it also comes after crashes in previous years with driverless or semi-autonomous technology.

A June report by the National Highway Traffic Safety Administration (NHTSA) found that nearly 400 accidents in the US over a 10-month period were caused by autonomous driving or driver-assistance technology.

Elon Musk’s Tesla cars were involved in most of these incidents, 273 out of 392 that took place between July 1, 2021 and May 15 this year. Although Tesla is responsible for about 70 percent of accidents, the automaker has produced a much larger share of all driverless or assisted vehicles currently on American roads.

Of the remaining number of crashes involving ADAS technology reported by a dozen automakers, 90 of them were Hondas and 10 were Subrarus. Ford Motor, General Motors (GM), BMW, Volkswagen, Toyota, Hyundai and Porsche each reported fewer than five incidents.

The agency said that of 130 reported accidents involving automated driving systems, 108 involved no injuries and one was an accident involving serious injuries.

In October 2018, one of Waymo’s self-driving minivans crashed into a median after its driver nodded off but touched the accelerator pedal, which turned off the autonomous driving software. Nobody was injured and no other cars were involved in the accident.

Waymo follows a similar script to San Francisco, where it allowed its employees to use the service first before moving on to trusted testers in that city. The company conducted surveys of San Francisco residents to determine what their concerns might be, due to the city’s unique topography and transportation issues.

Cars produced by Elon Musk’s Tesla have been involved in most accidents involving self-driving or driver-assisted technology, 273 out of 392, that occurred between July 1, 2021 and May 15 this year

Back in May, Waymo co-CEO Dmitri Dolgov (right) said at a TechCrunch event that the company had begun allowing its own employees to call in driverless rides in downtown Phoenix. Left: Tekedra Mawakanda, Co-CEO of Waymo

Sylvester Stallone denies any wrongdoing with the marital property