Wendy’s E.coli outbreak EXPANDS to New York and Kentucky after more than 100 people in the Midwest fell ill from the lettuce

By Alex Oliveira and Alex Hammer for Dailymail.Com

An E. coli outbreak first reported to have spread across the country in August has now reached New York and Kentucky, the CDC revealed.

The sudden spread is believed to have started from a Wendy’s in the Midwest, with cases previously reported in Indiana, Michigan, Ohio and Pennsylvania. New York and Kentucky joined the list Friday, reporting one case each.

The CDC noted that the number of cases associated with the outbreak is likely higher than the official tally of 97 and may not be limited to the six reported states.

According to official agency calculations, Michigan has seen the most cases at 58.

A specific source for the outbreak has yet to be confirmed, but the majority of people affected by E. coli-related illness reported eating romaine lettuce sandwiches at Wendy’s locations in Indiana, Michigan, Ohio and Pennsylvania.

Of the 67 people who provided detailed food histories to health officials, 81 percent said they ate at a Wendy’s restaurant in the week before their illness began, the CDC said. 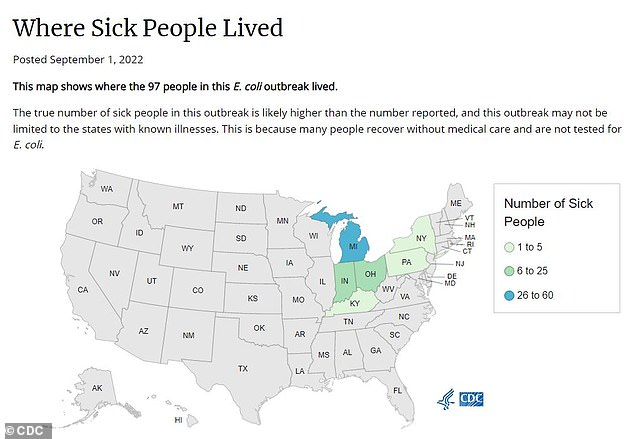 The E. coli outbreak has spread to New York and Kentucky after previously being reported in Indiana, Michigan, Ohio and Pennsylvania

Wendy’s has since become the subject of a statewide public health probe and said last month it was fully cooperating with health officials and would be removing lettuce from several restaurants in the affected regions, as well as some in other states, including New York.

“We are fully cooperating with health authorities in the ongoing investigation into the regional E. coli outbreak,” the burger chain told Reuters in an email.

“The lettuce we use in our salads is different and not affected by this promotion,” the company said.

However, the CDC is not advising against eating at Wendy’s restaurants or asking people to avoid romaine lettuce, as it has yet to confirm the exact cause of the outbreak.

Although many E.coli strains are found in the gut of healthy people and animals and are harmless, certain types can cause severe abdominal cramps, bloody diarrhea and vomiting.

There is no treatment for the disease, and although most people’s immune systems will defeat the bacteria over time, the CDC recommended people with severe cases see a doctor.

The CDC said the current outbreak has hospitalized 42 people and left 10 with hemolytic uremic syndrome, a complication that could lead to kidney failure. No deaths were reported.

https://www.dailymail.co.uk/news/article-11178995/Wendys-E-coli-outbreak-SPREADS-New-York-Kentucky-100-left-sick.html?ns_mchannel=rss&ns_campaign=1490&ito=1490 Wendy’s E.coli outbreak EXPANDS to New York and Kentucky after over 100 people have fallen ill

State Excise Tax on Fuel Set to End September 29: Why is Fuel So Expensive?