It’s the gloriously trashy British soap about feuding WAGs that took the UK by storm in the early 2000s.

Footballers’ Wives ruled the TV ratings from 2002 until its cancellation in 2006, and even gained a substantial following in Australia on DVD.

And now, 20 years after it premiered, the outrageous series is enjoying a second life in the UK after being picked up by the streaming service BritBox last year.

Unfortunately, it’s still unavailable to legally stream anywhere in Australia, leaving Aussie fans no choice but to dust off their DVD players if they want to watch it. 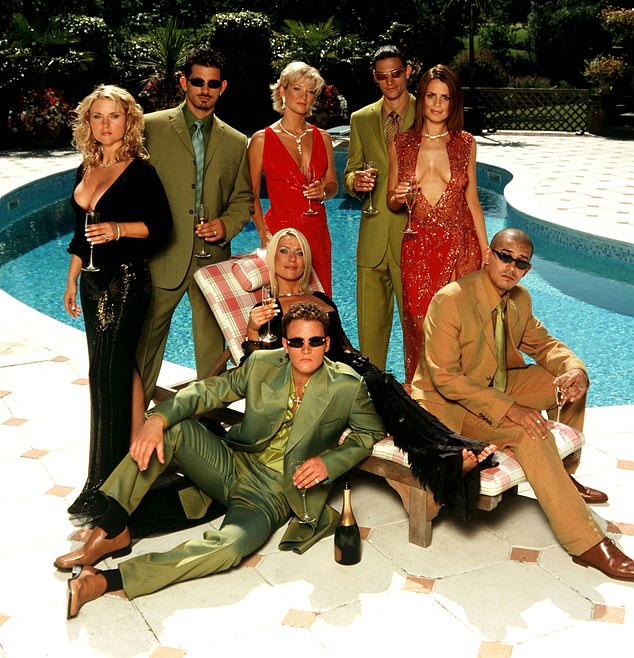 Naturally, many Aussie fans may be wondering what happened to the cast of crazy characters since Footballers’ Wives came to end.

Once Footballers’ Wives ended, Lucker continued to work in English soaps, starring in EastEnders before jumping over to Hollyoaks.

She hasn’t acted since 2016, and these days seems to keep a low profile, rarely even posting on social media.

Zoe Lucker played Tanya Turner (left), arguably the show’s biggest star and villain. She has stepped out of the spotlight in recent years. (Pictured right in January)

Last year, she told The Sun she won’t let her teenage daughter watch Footballers’ Wives due to the sexual content.

‘There was so much sex, and people remember it for that,’ she said.

‘You just didn’t see things like that on telly back then, especially at nine o’clock on Wednesday night on ­terrestrial TV. But my daughter is 13 next week and I don’t want her to see it, because of the sex,’ she continued.

‘Nobody wants to see their mum doing something like that. It’s not right.’

Last year, Zoe said she won’t let her daughter watch Footballers’ Wives due to the sexual content. (Pictured together)

Tanya’s on-screen husband Jason Turner, played by Cristian Solimeno, was one of the show’s other big villains.

He spent the first two seasons cheating on Tanya and feuding with Frank Laslett, before being killed off by Chardonnay Lane-Pascoe, who herself died shortly after from anorexia.

The handsome actor has continued to work since Footballers’ Wives, starring in Hollyoaks, Guilt, and Glow & Darkness.

Tanya’s on-screen husband Jason Turner, played by Cristian Solimeno, was one of the show’s other big villains. Solimeno (here in 2018) has enjoyed a successful career in the years since

Kyle Pascoe’s mum Jackie (played by Gillian Taylforth) had a surprisingly long run on the series, appearing in all five seasons.

Her most memorable storyline saw her fall pregnant to Jason Turner, before letting her son Kyle and his wife Chardonnay raise the baby as their own.

Taylforth, a veteran of the small screen, has enjoyed a fruitful career both before and after Footballers’ Wives.

In addition to playing Kathy Beale on EastEnders, the 67-year-old has starred on The Bill, Casualty, Hollyoaks and even Celebrity Big Brother.

Jackie Pascoe, played by Gillian Taylforth, has barely aged a day since her time on the soap. Pictured in 2003 (left) and 2021 (right)

Fans will fondly remember Jackie’s son Kyle for his wedding to Chardonnay, which was inspired by Peter Andre and Katie Price’s real-life nuptials.

Just like his on-screen mum, actor Gary Lucy, now 40, has starred in Casualty and Hollyoaks.

However, since Footballers’ Wives ended, he is probably best known for playing Danny Pennant in EastEnders.

In an interview last year, Gary admitted he was never more famous than when he starred on the scandalous soap.

‘Going on personal appearances, the response was ridiculous. It was the closest you could get to being a pop star. I filmed Hollyoaks at the same time too. I was very blessed, it was a once-in-a-lifetime opportunity,’ he told This Morning.

The glamorous Chardonnay, played by Susie Amy, was one of the show’s most memorable characters until her sudden death from anorexia.

She quit at the height of the show’s popularity after just two seasons in order to pursue a career in Hollywood.

The move reportedly shocked producers at the time, and resulted in season three opening with her funeral, which seemingly came out of nowhere.

After appearing in a few low-budget American films, the actress returned to the UK and landed a regular role in Hollyoaks as Scarlett Morgan.

One of the most memorable late additions to the series was WAG Amber Gates, played by the stunning Laila Rouass.

One of her most memorable scenes saw her become deranged and crash a party, where she tried to kill Bruno Milligan with a shotgun.

Laila continued to work consistently after Footballers’ Wives, but her biggest role was as Sahira Shah in the medical drama Holby City.

One of the most memorable late additions to the series was WAG Amber Gates, played by the stunning Laila Rouass (pictured in 2005)

The actress-turned-activist speaks to media as she visits Syrian disabled children in the Reyhanli district of Turkey’s Hatay province on February 26, 2020

Her love life has earned her just as much attention as her acting career, with her exes including celebrity chef James Petrie, professional snooker player Ronnie O’Sullivan and London businessman Nasir Khan.

In 2017, she made headlines after being caught up in the Barcelona terrorist attack.

‘Hiding in a restaurant freezer. Happened so fast. Praying for the safety of everyone here,’ she tweeted during the ordeal.

In 2018, she joined One Family as an ambassador for its Refugee Fund and has spent the last few years focusing on activism.

Footballers’ Wives and its spin-off Extra Time have become popular again in recent years after being picked up by UK streaming service BritBox.

‘They still recognise myself and my cast members for that,’ she added.

‘The fans have kept it alive all these years and that’s an absolute testament to the writers and to the directors and creators. They did this at a time when no one else was doing it.’

Footballers’ Wives: The most ludicrous show EVER?

Season one, 2002: A sexual predator nurse, coma-inducing attack, burnt breasts and a LOT of romps

Frank’s attack: After Jason Turner (Cristian Solimeno) is lied to about a new recruit on the team, he and wife Tanya attack Earls Park’s chairman Frank Laslett (John Forgeham). After passing off the attack as a car accident, they frequently visit him in court, where Tanya discovers manic nurse Jeanette Dunkley (John Forgeham) has been raping the boss, who wakes up and discovers Tanya and Jason’s deceit.

Chardonnay’s inferno: While celebrating her hen do before marrying Kyle Pascoe (Gary Lucy), glamour model Chardonnay Lane (Susie Amy) is approached by a group of drunken admirers wielding a candle stick. While attempting to light a cigarette, one of the gentlemen accidentally sets fire to the festive lei garland Chardonnay is sporting. Her chest is left severely burnt, leading to a breakdown for the model.

Season two, 2003: A hermaphrodite baby with a half-brother for a father, a fake rape allegation and a Champagne cliffhanger

Jackie and Jason’s baby: While breaking what was described as: ‘Rule one in the s***gers handbook’, Jason was indulging in one of his endless affairs – with his best friend Kyle’s mum Jackie. When Jackie discovers she’s pregnant, a mix-up meant Chardonnay believed it was she who was expecting. After much confusion, the family make the bold decision for the couple do adopt Jackie’s baby – although know one yet knows Jason is the father. Once it is announced, the family discover baby Paddy is a hermaphrodite – much to Jason’s disgust.

The Frank, Jason, Tanya Saga continues: In a bid to get away with their crime in the previous season, Tanya accuses Frank of raping her, however they are soon forced to settle outside court, much to the chairman’s chagrin.

Jason’s shock death: As the series concludes and Jason makes more and more enemies, he and Tanya decide to renew their wedding vows however she breaks up the ceremony by screaming at her husband. He then drunkenly heads to the roof where the menace suffers a slip, only for one of his many enemies to push him off using a Champagne bottle.

Season three, 2004: Death by anorexia, the introduction of the Gates clan and Frank’s being killed ‘by s**ging’

Chardonnay’s death: The show opens with Chardonnay’s funeral after she died having fallen victim to anorexia; however, it is later revealed that she was Jason’s killer and was also riddled with guilt.

Frank’s murder: In a bid to get rid of her beau Frank, after marrying in episode one, Tanya begins feeding him a lethal combination of Viagra, alcohol and cocaine before getting involved in energetic romping session – one of which eventually ends with his death – however he has the last laugh by piercing holes in their condoms and getting pregnant.

Oh dear: The baby swapping storyline was panned by critics

Baby swapping: Tanya swapped her own baby son Troy with Amber’s son Pundarik when they were expecting at the same time – supposedly with Conrad Gates’ baby – yet after Frank’s dying revenge of impregnating Tanya must push to make people believe Conrad is the father.

Darius gets his comeuppance: When the Earls Court gents go on holiday, it transpires one of the team raped one of the shot girls they partied with. Darius is unveiled as the rapist, so his victim Katie goes undercover as a nanny for Tanya before she kidnaps Darius on a boat to get her revenge.

Lucy’s botched escape attempts: When newbie Lucy Milligan attempts to get away from her controlling husband Bruno, she falls into the arms of a murderous doctor she met online. He tries to kill her in a suicide pact following his own wife’s death. When Conrad and Bruno try and save Lucy, Bruno accidentally shoots Conrad in a horror scene.

Joan Collins arrives: Joining the cast was Joan Collins, who played Eva de Wolffe, the girlfriend of Earls Court’s latest bright star Paulo Bardosa. Tanya begins an affair with the hunk, shortly before she realises his bizarre relationship with Eva – as it transpires rather than be his lover, she is more an owner after rescuing him from a Brazilian orphanage.

Shattering news: Newbie footballer Tremaine Gidigbi and his stunning girlfriend Liberty Baker caused ructions when they entered the scene however their romance was shaken to its core when she starred in an advert in Japan which depicted her as a cannibal. After the controversy of the commercial, she is glassed in a nightclub – putting her modelling career in jeopardy

https://www.dailymail.co.uk/tvshowbiz/article-11163405/What-happened-stars-outrageous-UK-soap-Footballers-Wives.html?ns_mchannel=rss&ns_campaign=1490&ito=1490 What happened to the stars of outrageous UK soap Footballers’ Wives