White House Press Secretary Karine Jean-Pierre on Thursday insinuated that Americans who disagree with the “majority” are “extreme” and insisted that President Biden’s “soul of the nation” speech was “optimistic.” and will be “non-political”.

The president will balance his attacks on “extreme MAGA Republicans” and threats to democracy in his primetime speech Thursday night at Independence Hall in Philadelphia.

His comments 10 weeks before midterms will push turnout to keep the Democrats in control of Congress and target the GOP wing he has compared to the semi-fascists.

Jean-Pierre said the president will speak about protecting liberty and that those who disagree are “extreme”.

“If you’re not where the majority of Americans are, that’s extreme. That’s an extreme way of thinking,” she said at Thursday’s press conference.

She gave examples of those who are pushing for a total ban on abortion – without exception – and those who are attacking democracy and inciting violence.

She said the speech, which begins at 8 p.m. ET, will be upbeat in tone and not political.

“This is not a political speech,” said Jean-Pierre.

“What we’re going to hear from him is how we can move the country forward. That will be the focus of the speech tonight,” she said. “It’s going to be optimistic, it’s going to be hopeful, but it’s also going to showcase what’s currently going on at this moment.”

Biden’s approval rating was 40 percent in a Quinnipiac University poll conducted on Thursday.

That’s a nine-point rise since the last poll and follows other polls showing Biden’s approval rating, which hovered in the mid-30s, is trending higher. 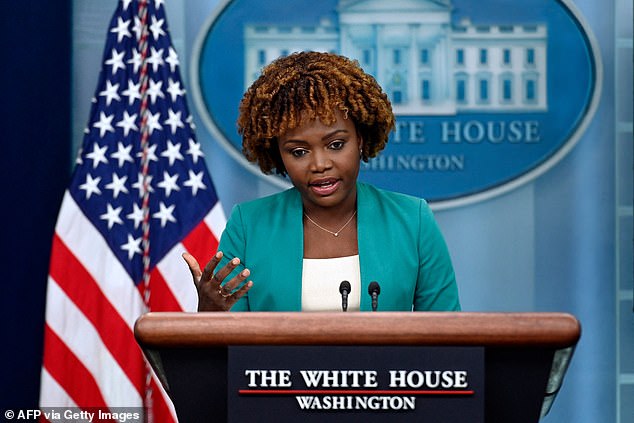 President Joe Biden is set to deliver an upbeat, non-political speech focusing on the threat to democracy Thursday night in prime time

The President will use his remarks to directly target the Republican Party, and in particular supporters of former President Donald Trump, who portray Biden as extremists intent on stripping Americans of their rights.

And in his speech, Biden will frame November’s congressional election, as Democrats seek to retain control of Congress, as part of an ongoing battle for the “soul of the nation.”

But the speech is not aimed specifically at Trump but at his supporters who have accepted his lie that they won the 2020 election.

“It’s so much broader, so much bigger than any party, than any person,” said Jean-Pierre.

Biden will use historical background to get his point across: he will be speaking outside Independence Hall in Philadelphia, the site where the Declaration of Independence and the US Constitution were debated and adopted by America’s Founding Fathers.

The former president remains a force to be reckoned with in the Republican Party, increasing his influence in primaries across the country where his MAGA supporters can make or break a candidate.

Trump’s record in those races has been mixed — he defeated his top target, Republican Liz Cheney of Wyoming, in her August primary, but other Republicans who voted to impeach him have won primaries.

And now there are concerns from some in the GOP leadership who fear the federal investigation into whether Trump took classified documents from the White House will affect them at the ballot box in November.

But Trump still has his defenders.

McCarthy will attack Biden’s own harsh words about Republicans.

“When the President speaks at Independence Hall tonight, the first lines out of his mouth should be apologizing for slandering tens of millions of Americans as ‘fascists,'” he will say.

“What Joe Biden fails to understand is that the soul of America is the tens of millions of hardworking people, loving families, and law-abiding citizens he has slandered for simply wanting a stronger, safer, more prosperous country,” McCarthy said.

And Republican national leader Ronna McDaniel said Biden’s “agenda has pitted neighbors against each other, rewarded the rich, penalized working families, and trampled on Americans’ rights and freedoms.” Joe Biden is the chief divider and embodies the current state of the Democratic Party: one of division, disgust and hostility towards half the country.

Trump will be in Pennsylvania on Saturday when he holds a campaign rally for the Senate and the state’s gubernatorial nominees in Wilkes-Barre.

Meanwhile, Democrat hopes for the midterms are rising. A new Wall Street Journal poll Thursday showed that the party has gained independent voters and Americans have an improved view of President Biden, whose approval rating has surged upwards in recent weeks.

Biden has targeted Trump supporters while campaigning for Democrats.

The president accused Trump and “extreme” Republicans of “semi-fascism” at a fundraiser for Democrats in August.

Biden began his 2020 presidential campaign in Philadelphia with a speech in May 2019.

And he said he was inspired to run for president after the 2017 Unite the Right rally in Charlottesville, Virginia, where a clash between white supremacists and counter-protesters left three dead and dozens injured.

He maintained his “soul of democracy” argument throughout the last election campaign and into his early years in the presidency.

On the first anniversary of the January 6 riot on the Capitol, Biden said the country was in a battle for its soul.

President Biden will address Philadelphia’s Independence Hall, the site where the Declaration of Independence and the US Constitution were debated and adopted by America’s Founding Fathers

Joe Biden, along with Jill Biden, launched his 2020 presidential campaign at a May 2019 rally in Philadelphia

Thursday night’s speech in Philadelphia will be Biden’s third in the battleground state of Pennsylvania in a week.

Biden was in Wilkes-Barre, Pennsylvania on Tuesday to speak about law enforcement support.

And on Monday, the president will campaign alongside Democratic Senate nominee John Fetterman at the Pittsburgh Labor Day parade.

https://www.dailymail.co.uk/news/article-11170829/White-House-insists-Bidens-speech-tonight-optimistic-NOT-political.html?ns_mchannel=rss&ns_campaign=1490&ito=1490 White House insists Biden’s speech tonight will be ‘optimistic’ and NOT political