The White House went on the offensive Tuesday, urging Kevin McCarthy to disclose the “secret deals” he made with Conservatives as the war between President Joe Biden and Republicans heated up.

When House Republicans demanded that Biden release more information about classified documents found at his Wilmington home — including visitation logs of his private Delaware resident — the administration returned fire.

“Will House Republicans come clean and disclose the secret dealings Kevin McCarthy made with his faction’s extreme MAGA members to gain their support for the Speaker?” asked Ian Sams, spokesman for the White House Attorney’s Office biden 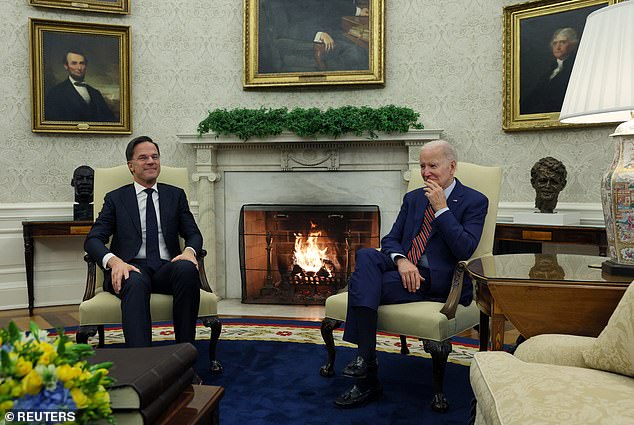 Biden, meanwhile, remained mum in the face of questions Tuesday about the documents.

He did not answer questions from reporters – including a question if he would speak to Special Counsel Robert Hur – when he met with Dutch Prime Minister Mark Rutte in the Oval Office.

Biden just sat still as White House officials ushered screaming members of the press out of the room.

The White House, meanwhile, escalated its fight with the GOP, urging McCarthy to reveal the deal he made to win hard-line Conservatives for the post of Speaker of the House.

It took McCarthy 15 ballots to garner enough support from his own party to become Speaker. There have been reports of the deals he’s struck – including a deal that would only allow a lawmaker to recall a speaker – but he’s never outlined all the concessions he’s made.

White House spokesman Andrew Bates slammed the GOP for deals on abortion and other issues. He led the call for more transparency from Republicans.

What other hidden bargains did Speaker McCarthy make behind closed doors with the most extreme, ultra-MAGA members of the House Republican conference? The American people have a right to it — now — and so we urge them to make every one of them public immediately,” he said in a statement.

McCarthy has said he had no formal arrangements to win the votes he needed, but the Conservative said they had been promised certain concessions. Already in fight mode with the White House, McCarthy is calling for government spending cuts rather than raising the debt limit – a priority for Conservatives.

The White House has expected to fight a battle with House Republicans after they have the majority in this chamber. They have already vowed to investigate the President, his family and his government.

House Oversight Committee Chairman James Comer, a Republican from Kentucky, on Sunday sent a letter to Biden’s chief of staff, Ron Klain, requesting access to all visitation logs for the Delaware home.

“Without a list of those who visited his residence, the American people will never know who had access to these highly sensitive documents,” he wrote.

The White House has said there are no visitor logs as it is a private home.

On Saturday, the White House announced that a fourth batch of documents had been found — again at Biden’s Wilmington home.

The White House has repeatedly faced questions about its lack of transparency about when the documents were discovered. They waited about two months — until well after November’s midterm elections — to announce documents found at Biden’s DC think tank before voters went to the polls.

The attorney’s office then made two more announcements — the announcement of documents found in Biden’s garage at his Wilmington home, and then a third document found in a room in that home.

On Saturday, the administration announced that five more pages of classified information were found in Biden’s Wilmington home.

White House Counsel Richard Sauber said because he had a security clearance and Biden’s personal attorneys did not, he went to the president’s home in Wilmington to review other papers there.

Attorney General Merrick Garland announced last week that he would appoint a special counsel to investigate the matter.

Biden previously said he and his staff would work together on the investigation. He expressed surprise to discover he had secret documents from his days as Barack Obama’s vice president.

“God willing, I’ll have a chance to talk about it soon,” he added, as reporters called out questions. “We’ll see how this all develops.”

https://www.dailymail.co.uk/news/article-11645443/White-House-demands-Kevin-McCarthy-reveal-deals-speaker.html?ns_mchannel=rss&ns_campaign=1490&ito=1490 White House is asking Kevin McCarthy to disclose all deals he made as speaker