German police today arrested 25 people belonging to a network of suspected far-right terrorist groups aiming to overthrow the German government in a series of sweeping raids.

Prosecutors say the conspirators were united under the “Reichsbürger” or “Reichsbürger” movement, which rejects the modern German democratic state in favor of the pre-war monarchical empire that existed from 1871 to 1918.

Among the prisoners is a linchpin of the Reich Citizens’ Movement – a man who dedicated himself to Heinrich XIII. Prince of Reuss called.

But this title of nobility is not just an alias dreamed up by some radical autocrat.

The 71-year-old aristocrat is a true descendant of the House of Reuss – a family that ruled parts of Germany for hundreds of years – and is said to be hell-bent on tearing down the German government to bring back the glory days of old. 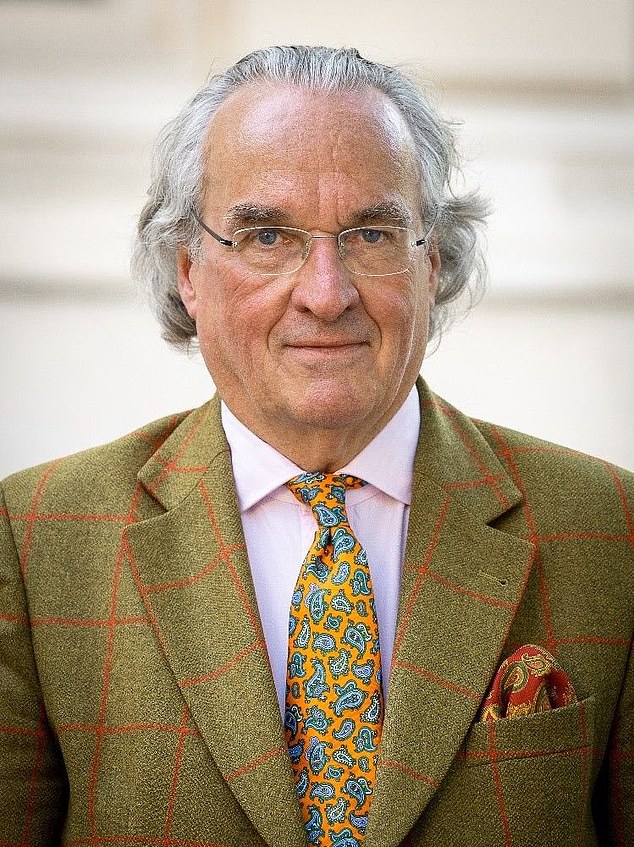 Heinrich XIII, Prince of Reuss, is considered one of the main figures in the Reich Citizens’ Movement

Heinrich XIII, Prince of Reuss was born on December 4, 1951 to father Heinrich I and mother Princess Woizlawa Feodora Reuss – another German queen who had married into the Reuss bloodline.

The House of Reuss was founded in the late 12th century, and the rulers named each of their male sons Heinrich – a homage to the Holy Roman Emperor Henry VI, who bestowed their lands on them.

Each Heinrich was given a number after his name, ranging from 1 to 100 and then starting again from the beginning.

Henry XIII married an Iranian, Susan Doukht Jalali – now known as Princess Susan Reuss – and adopted his family’s time-honored naming convention with his own son, Heinrich XXVIII, who was born in 1991.

The German authorities assume that Henry XIII. held several meetings with Reichsbürger members in his castle in Saaldorf in Thuringia

The Reuss bloodline ruled over the historic states of Reuss for centuries until the German Revolution of 1918, which resulted in the collapse of the German Empire and gave birth to a new, democratic republic.

Heinrich’s great-grandfather – Heinrich XXVII – had to give up his rule when Reuss was incorporated into what is now the German state of Thuringia after the First World War.

But the descendants of the Reuss family kept much of their wealth, including a number of castles and palaces.

One of these castles – a neo-Gothic lodge in Saaldorf – is the personal property of Henry XIII, and German authorities claim it was used for many Reichsbürger meetings where members plotted their violent coup against the German government.

According to MDR, one of Henry XIII’s properties raided by police today serves as the business address for several companies linked to a London-based wealth management firm that may have been used to raise funds for the Reichsbürger cause.

Perhaps it should come as no surprise that Henry XIII, 71, became one of the main figures of the Reichsbürger.

In 2019, the prince gave a keynote address at a Worldwebforum event in Zurich and spent 15 minutes railing against the abolition of the German monarchy and the reduction of his family’s influence.

Heinrich recounted how his great-grandfather had to relinquish his rule when Germany became a republic, and rhapsodized about days gone by when the people who lived under the rule of his ancestors ‘lived a happy life because the administrative structures were simple and transparent’.

“If things don’t go that way… who should you turn to today? Your parliamentarian? Local, federal, EU level? Much luck!’ he joked sarcastically. before continuing to campaign for a return to a “sovereign Germany”.

In July this year, the current spokesman for the Reuss bloodline – Heinrich XIV – told German media that his disaffected relative was a “confused old man who is now mired in conspiracy theory misunderstandings,” adding that he had done so began distancing himself from his family around 14 years ago.

Henry XIII was arrested this morning at his home in Frankfurt, where he also has an office as a real estate investor.

Henry XIII delivers a speech at the Worldwebforum in Zurich, 2019, telling the audience how his family was forced to abdicate when Germany became a republic

Heinrich raved about days gone by when the people who lived under the rule of his ancestors “lived happily ever after because the administrative structures were simple and transparent”.

German prosecutors claim that Henry XIII. was one of the ringleaders of the Reich Citizens’ Movement and probably one of its most important ideological drivers and fundraisers.

They said the prince, along with the others arrested this morning in sweeping raids across Germany, had set up a “terrorist organization with the aim of overthrowing the existing state order in Germany and replacing it with a separate form of government that already existed in the course of the founding.’

Prosecutors said some of the group’s members had made “concrete preparations” to storm parliament with a small armed group.

They even claimed Henry XIII. contacted Russian officials to negotiate a new order in the country after the fall of the German government.

The prince was reportedly set to become Germany’s new leader after the extremist movement carried out its planned attack on Germany’s Bundestag.

The Russian embassy in Berlin has since denied any connections to Henry XIII. or the Reich Citizens Group.

Henry XIII is said to have hatched the plans with a former paratrooper known in the German media as Rüdiger v.

Known by its German acronym AfD, the party is increasingly being targeted by German security services due to its links to extremists.

Katie Price's ex, Kieran Hayler, is being questioned by police on suspicion of stalking