To millions, her face was instantly familiar, its feline aquamarine eyes and cut-glass cheekbones feted by fashion designers. Her name, however, was not.

Indeed, mention Tatjana Patitz without an accompanying photograph, and many may struggle to recall what she was known for. Which is probably the way Tatjana would have wanted it.

Despite being one of the first supermodels – part of that gang of five alongside Cindy Crawford, Naomi Campbell, Christy Turlington and Linda Evangelista – she recoiled from the fame, fortune and occasional ignominy that went with her profession.

After retreating to a Californian ranch, she largely turned her back on the limelight. 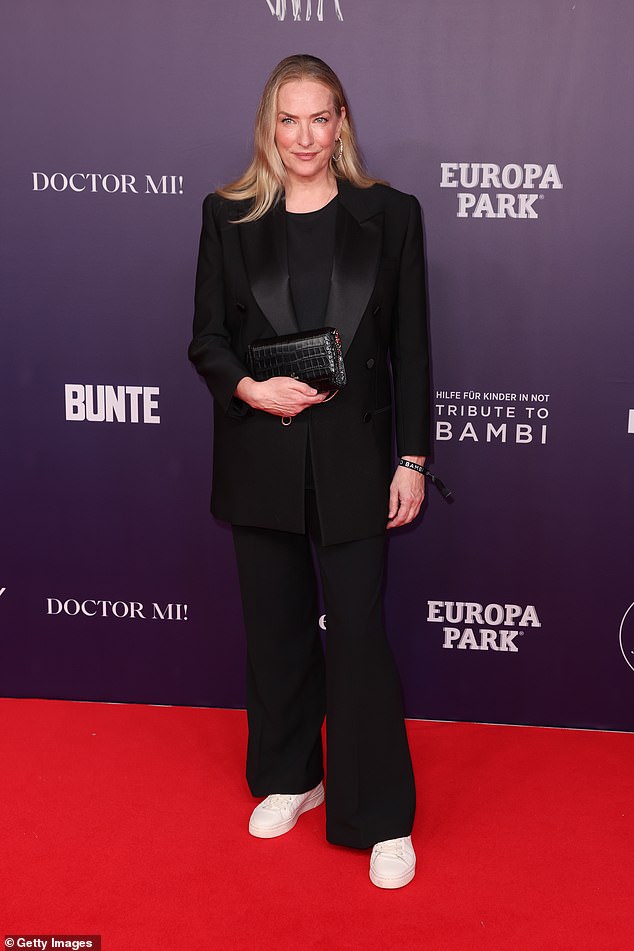 Indeed, mention Tatjana Patitz, pictured in Berlin, Germany attending the Tribute to Bambi 2022, without an accompanying photograph, and many may struggle to recall what she was known for. Which is probably the way Tatjana would have wanted it

Despite being one of the first supermodels, Tatjana pictured in the center, recoiled from the fame, fortune and occasional ignominy that went with her profession

Although she carried on working, there were no attempts to cheat ageing with surgery, no headline-grabbing relationships or spells in rehab and certainly no desire to put dollar signs ahead of her desire for a quiet life. Such was her need for privacy that many friends had no idea Tatjana had breast cancer before the news emerged last week that she had died aged just 56.

‘She normally tapped away messages on my Instagram but they stopped two or three months ago,’ says one acquaintance. ‘It’s heart-breaking.’

Even during peak supermodel hysteria, when Evangelista famously said she wouldn’t get out of bed for less than $10,000 and Crawford’s mole spawned a million pencilled-on copycats, 6ft-tall Tatjana exuded an air of mystery.

‘Of all the supermodels, she was the most captivating,’ another who met her said. ‘She marked herself out because she never followed the pack. She stepped away from all the judgment and had a life.’

An animal rights activist and bookworm, she was also a single mother, leaving behind an 18-year-old son, Jonah, whom she recently described as her ‘source of happiness’.

It was this refreshing perspective which led to her saying recently: ‘I’ve never sold my soul.’

In many ways, she was the anti-model: repelled by the money-grabbing wildness indulged in by contemporaries. So what made Tatjana stick to her principles? And what kind of life did she lead?

Although she carried on working, as pictured above in Paris for Christian Dior in 1991, there were no attempts to cheat ageing with surgery, no headline-grabbing relationships or spells in rehab and certainly no desire to put dollar signs ahead of her desire for a quiet life.

Tatjana pictured second from the left was part of a gang of five alongside Cindy Crawford, Naomi Campbell pictured on the far right, Christy Turlington and Linda Evangelista

The eldest of three siblings born in Hamburg to a German travel journalist father and Estonian dancer mother, Tatjana’s family moved to Sweden when she was seven. ‘I was the ultimate geek growing up: my only interests were horses and reading books,’ she recalled. Taller than everyone else, she struggled ‘to blend in’.

BEING unpopular with boys, she was surprised when aged 15 in 1983, she was spotted shopping by a photographer who asked her to enter an Elite model agency competition.

She agreed, came third, won a short-term modelling contract and moved to Paris. Her profile was boosted when she met German photographer Peter Lindbergh, whose reluctance to retouch photos must have resonated with Tatjana.

He once said of her: ‘It’s impossible not to admire her and not to be just a little bit in love with her.’

She moved to New York and landed work with Versace and Chanel, and most expected her to remain amid the city’s fashion set. Instead, in 1988, desperate to be near nature and ‘the ocean’, Tatjana moved to Malibu in California.

Her agents warned this would be a big mistake, but she described it as ‘the best decision I made for my well-being and mental health’.

Celebrity status, was never her goal. ‘I don’t want to do anything for fame, money or glamour,’ she said.

‘She was a quiet soul,’ says Sarajane Hoare, who met Tatjana as a teenager when she was fashion editor at British Vogue. ‘Many don’t know her quietness was because she was incredibly shy.

I don’t think she loved being photographed.’ In 1988, Hoare set up a shoot in the Californian desert with Tatjana and the late Herb Ritts, another photographer pivotal in progressing her career.

‘Tatjana turned up a day and a half late. She said she had a puncture in her Jeep. She was often very late but I didn’t mind. When she was in front of the camera, it was always magical,’ Hoare recalls.

Hoare devised a desert nomad theme. ‘I used black veiling partly to protect her face in the middle of the desert heat,’ she said.

The result, with Tatjana’s face partially obscured by a black silk veil, remains one of the most iconic Vogue covers.

Another classic was the 1990 portrait of Tatjana with Crawford, Turlington, Campbell and Evangelista wearing bodysuits and jeans when then Vogue editor Liz Tilberis was lacking a January cover.

Hoare says: ‘I said to Peter and Liz: ‘I think it would be an amazing idea if we had all of them [on it]. I’ll organise the clothes.’ I didn’t sleep for two nights. But it was a big success.’

It was such a triumph that Lindbergh called the cover ‘the birth certificate of the supermodels’, and singer George Michael requested the five appear in his Freedom music video that year, consolidating their A-list status.

Yet Tatjana still neither saw herself as a celebrity, nor behaved like one. Fashion editor Fiona Golfar recalls how she met the model in an LA nightclub. ‘She was so gentle,’ she said.

More than this, as well as having men fall at her feet, Tatjana was everyone’s favourite girl crush.

Golfar said: ‘I remember thinking that night, ‘Is she looking at me [in a sexual way] or is that just how she looks at people?’

‘And she was definitely friendlier than I would expect.’ Indeed, Tatjana’s worldly demeanour belied an innocence, according to Lucinda Chambers, former fashion director of Vogue: ‘She looked so strong and fierce but was very easy and quite shy. What you saw didn’t reflect who she was as a person, who was also very beguiling.’

Unlike later models, Tatjana wasn’t pressured to diet away her curves. ‘I never starved myself,’ she said.

But she still described modelling as a ‘gruelling’ lifestyle with ‘zero’ personal life and ‘three hours of sleep a night. There’s no privacy and it’s not fun’.

Arguably, it wasn’t just her career which meant relationships rarely seemed to last, but also her free spirit. ‘I am too independent,’ she said. ‘Maybe that was what made the men afraid.’

There was a reported short romance with British model Nick Kamen early in her career, and a rumoured dalliance with actor Johnny Depp. In 1993, she met actor Pierce Brosnan at a cowboy dancing class after his wife Cassandra’s death from cancer.

Yet after he declared his love for Tatjana, she said, devastated: ‘Suddenly, he told me it was getting too close, that he wasn’t ready for what was happening.’

Next came a year-long relationship with pop star Seal, which ended in 1997 due to alleged temper issues. ‘He has anger issues. He is not someone who I think of fondly now,’ said Tatjana in 2012.

Although she continued modelling, with campaigns for Pantene and Marina Rinaldi, some believe her distinct visual appeal started to work against her.

‘You couldn’t transform her like the others,’ says Lucinda Chambers. ‘Her moment was before the heroin chic waif moment. That might have affected her career as she just wasn’t that.’

Happiness finally appeared to beckon when in 2003 she married marketing executive Jason Johnson. Jonah was born the next year, but the couple separated in 2005. The split, she said, was ‘hard to go through’.

Although they are believed to have shared childcare, motherhood curtailed her career.

‘I wasn’t interested in weaning him as quickly as possible and getting back to work… Modelling and my career were the last things I was thinking about,’ she said.

When her attention returned to work, it was primarily as an environmental activist, championing ocean conservation and African wildlife. She even fostered six orphan elephant babies.

She posed for PETA campaigns, including the 1994 We’d Rather Go Naked Than Wear Fur image with Emma Sjöberg, Naomi Campbell, Heather Stewart-Whyte and Fabienne Terwinghe.

In keeping with this activism, Tatjana and Jonah, their four horses, dogs and two cats moved to a Californian ranch, where horse-riding continued to be her ‘therapy,’ her horses making her ‘happy and relaxed, especially if I feel pressured or tense’.

The fast-paced, disposable nature of modern social media arguably made Tatjana – whose final Instagram post was a picture of her dogs Matilda and Gatsby last August – feel more distanced from her job.

‘It’s all hashtag-watch-me- on-my-vacation-windblown-and-perfect. It has nothing to do with reality, or art. It’s a feeding frenzy,’ she bemoaned, ever-fearful her artistic son who followed her into modelling would get caught in it.

‘It’s very important to support him in his passions, to help him navigate when needed, and to help him grow into the person he is to become with an open heart,’ she said, tenderly.

Unlike her contemporaries such as Crawford, who admitted using Botox, and Evangelista, who had a disastrous fat-freezing procedure, Tatjana’s beauty routine was limited to ‘the occasional facial’ and her exercise regime consisted of just riding and hiking.

Determined to accept mid-life lines, she once said: ‘The thing about ageing is that you have no choice but to be OK with it…

‘I see pictures of myself really young and have to remind myself that as well as looking good, I was riddled with insecurities that I’ve long since shed. That’s more important.’

On reaching middle age, she declared: ‘I feel much better in my skin as time goes on.’

The upshot, Golfar says, is ‘when you look at her, you think: ‘You were a beautiful younger woman.’ You don’t think: ‘What have you done to yourself?’

Tatjana’s mid-life contentment was punctuated by grief, however, with the death of brother Sebastian, 50, in 2017 of causes she didn’t reveal. ‘We were basically twins growing up and I miss him so much it hurts,’ she wrote.

Yet whatever life threw at her, she remained true to herself throughout. Her life goal, when asked in 2019, was ‘to live fully and unapologetically’. For all the tragedy of her premature death, she certainly achieved that.

https://www.dailymail.co.uk/femail/article-11635903/why-never-heard-Tatjana-Patitz-died-week-just-56.html?ns_mchannel=rss&ns_campaign=1490&ito=1490 why have most of us never heard of Tatjana Patitz – who died last week at just 56?