While the idea of ​​a robot taking over your job might sound like the plot from the latest installment of Black Mirror, a new study warns it could become a reality for many people in the future.

Researchers at the Ecole Polytechnique Fédérale de Lausanne have identified which jobs are most and least likely to be taken on by robots.

Their findings suggest that meat packers, cleaners and construction workers are at the highest risk of being replaced by machines, while teachers, lawyers and physicists are safe.

‘The biggest challenge facing society today is to achieve resilience to automation,’ explained Professor Rafael Lalive, who co-led the study.

“Our work provides in-depth career advice for workers at high risk of automation, allowing them to take on more secure jobs while reusing many of the skills they learned in their old job.”

Based on the findings, the researchers created a tool (below) that shows the automation risk of your work and how you could reuse your skills.

In the study, the team combined academic and technical literature on robotic capabilities with employment and wage statistics on 1,000 jobs.

This allowed them to calculate which existing jobs are most at risk of being performed by robots in the future.

‘There are several studies that predict how many jobs will be automated by robots, but they all focus on software robots such as voice and image recognition, financial robo-advisers, chatbots and so on,’ explained Professor Dario Floreano, who the study conducted learning. 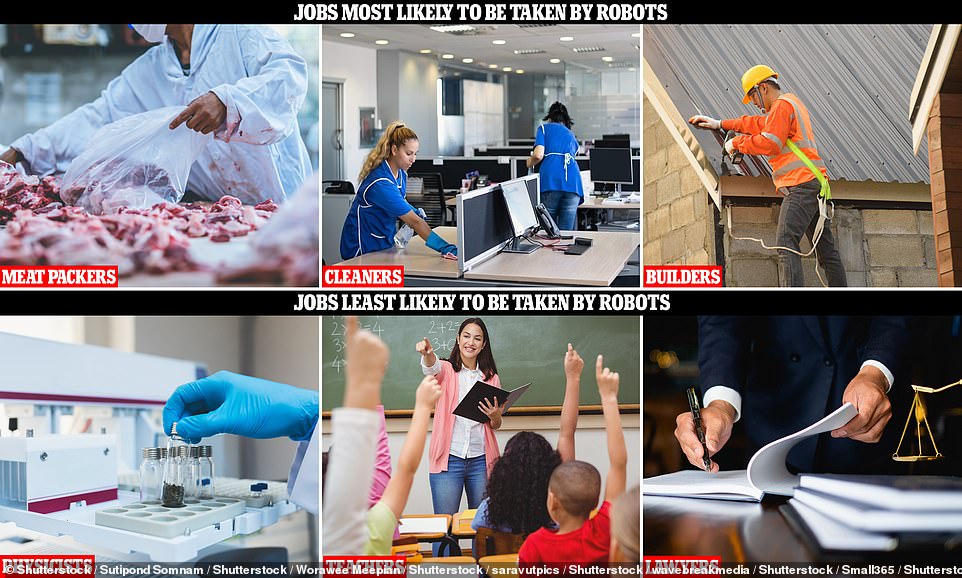 Jobs most at risk

“Furthermore, these predictions vary widely based on how job requirements and software capabilities are evaluated.

“Here we consider not only artificial intelligence software, but also real intelligent robots doing physical work, and we developed a method for a systematic comparison of human and robot skills used in hundreds of jobs.”

The team’s calculations show that jobs that require millimeter-precise movements are most likely to be handled by robots that can replicate those movements.

Their findings suggest that meat packers (stock image), cleaners and construction workers are at the highest risk of being replaced by machines, while teachers, lawyers and physicists are safe

Based on the results, the researchers developed a method to suggest the easiest career transitions for people whose jobs are at risk that they think governments could use to reduce unemployment in the future.

For example, the tool suggests that butchers and meatpackers could become machine setters, operators and tenderers for the winding, twisting and stretching of textiles.

Meanwhile, janitors and cleaners would be best suited to become models, according to the tool.

Meanwhile, jobs that require critical thinking or creativity are least likely to be taken on by my robots, which lack these skills.

Their results rank the 1,000 jobs in order of their highest to lowest likelihood of being taken over by robots.

Conversely, jobs in education, training and libraries, community and social services, and government are least at risk.

Based on the results, the researchers developed a method to suggest to people whose jobs are at risk the easiest career transitions that they think governments could use to reduce unemployment in the future.

For example, the tool suggests that butchers and meatpackers could become machine setters, operators, and tenders for textile winding, twisting, and stretching.

Meanwhile, janitors and cleaners would be best suited to become models, according to the tool.

The new study comes just after the World Economic Forum warned that robots will take over half of all workplace tasks by 2025.

Jobs that require “human skills” such as sales, marketing, and customer service are now expected to see increasing demand, as well as e-commerce and social media.

A major challenge will be the reskilling of workers, who will themselves be forced to refresh their skills, particularly in the areas of “creativity, critical thinking and persuasion,” the study says.

“It is critical that companies take an active role in supporting their existing workforce through reskilling and upskilling, that individuals take a proactive approach to their own lifelong learning, and that governments create an enabling environment to facilitate this workforce transformation. This is the central challenge of our time,’ said Klaus Schwab, Founder and Executive Chairman of the World Economic Forum.

https://www.dailymail.co.uk/sciencetech/article-10715687/Will-robot-job-Scientists-reveal-jobs-highest-risk.html?ns_mchannel=rss&ns_campaign=1490&ito=1490 Will a robot take over YOUR job? Scientists show the jobs with the highest risk