A man who filmed the moment a surfer struggled to stay afloat had to defend himself against vicious commentators who called him an “idiot” for not helping.

It showed a surfer battling waves beneath a wooden pier as he struggled to free his leg rope from his surfboard – with the rope apparently wrapped around one of the pylons.

Nearly 50 seconds into the shocking video, another swimmer jumped into the water and rushed to where the surfer got stuck while Powerfish cheered him on. 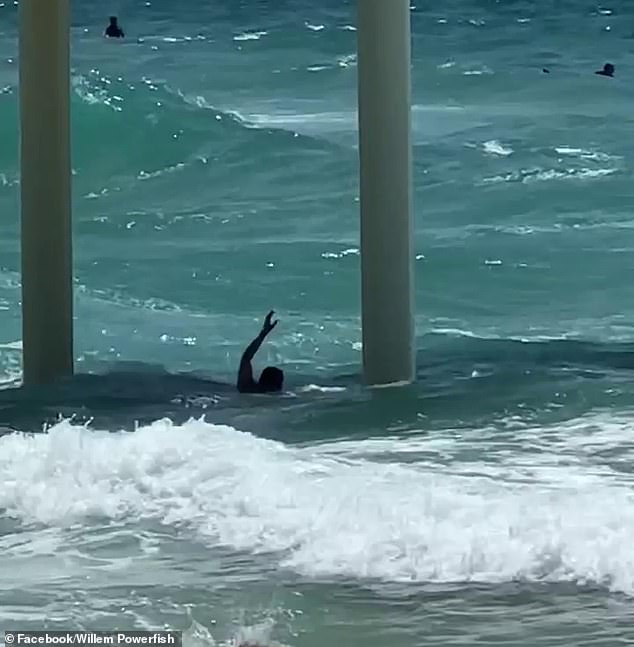 The brave swimmer managed to grab the surfer and push him onto his board.

The pair then swam out from under the boardwalk and made their way to shore.

Eventually they made it onto the sand, laughed and slapped each other on the back.

However, commentators were quick to criticize Powerfish’s lack of action rather than celebrate the heroic swimmer’s rescue.

“Typical Aussie attitude sit on your ass and watch,” one wrote.

“So why are you filming and not going to help him or get help for him, you idiot?” commented another.

“Shame on the spinner who said he wanted to go out,” said a third.

“The guy filming is a bigger idiot than the guy drowning,” said another commenter.

The surfer was saved by a heroic swimmer (together above), but many commentators criticized Powerfish for not saving the man himself

Powerfish responded to the gruesome comments with a statement, saying he would have further endangered the surfer had he tried to save him.

“I’m trying to lose weight right now in case something like this happens again and I can help.”

“Smart move if you know your skills and don’t mate. Too many guys die trying to help a situation beyond their capabilities,” one wrote.

“Some people don’t realize how difficult it is to swim in the sea. Add the fact that you are trying to save another person in need. Well done to the guy who filled in,” commented another person.

https://www.dailymail.co.uk/news/article-11630281/Willem-Powerfish-responds-angry-fans-filming-rescue-surfer-drowns.html?ns_mchannel=rss&ns_campaign=1490&ito=1490 Willem Powerfish reacts to angry fans after filming a rescue where a surfer almost drowns