The last occupant of “Australia’s Chernobyl” has missed today’s deadline to leave the country, raising fears of forced deportation.

The Western Australian government has told residents they have until August 31 to leave the city or face eviction by police under the Wittenoom Closure Act.

The deadline had previously been set for mid-June, but documents show it will not be extended a second time.

Lorainne’s daughter, Aileen Thomas, says the family worked to remove many of their belongings from the home, but personal challenges prevented them from completing the work.

Now she worries that the authorities would forcibly remove her.

“She’s ready to go. We’d just like to have a few more weeks to get the last few things sorted out and I don’t see that as a problem because the house will be vacated anyway.’ 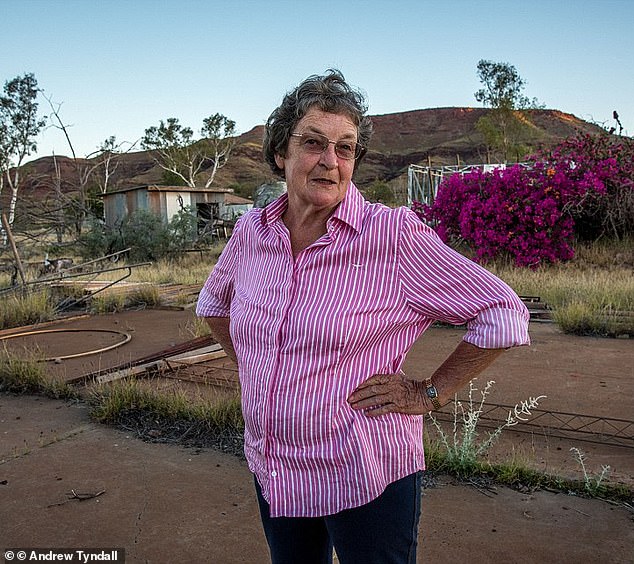 The Wittenoom mine, which once exported blue asbestos around the world, closed in 1966 and is blamed for the deaths of at least 2,000 workers and their families from inhaling the deadly fibers.

The Wittenoom asbestos mine operated from 1943 to 1966, killing over 2,000 workers and local residents (pictured workers bagging asbestos).

In its heyday, Wittenoom had a population of 20,000 and hosted fun events for locals such as asbestos shoveling competitions (above).

Asbestos had been produced in the region since the 1920’s and in April 1943 a mine was set up in the Wittenoom Gorge by CSR.

The Western Australian Government provided housing, a school, post office, hospital and police station, and a water supply to tar the road connecting the road to the mine.

CSR built a hotel, general store, butcher, bakery, coffee shop, library and other lodgings. Wittenoom even had its own race track and hosted events such as an asbestos shovel competition.

About 7,000 workers toiled in the asbestos mining and milling operations and 13,000 other residents, mostly women and children, lived in the town.

According to the Asbestos Diseases Society of Australia, the processed fiber was transported in open trucks to Point Samson, 330km away.

The blue asbestos was then stored in sheds and loaded onto ships. About half of Wittenoom’s production was sold abroad.

During the 23 years of operation of the Wittenoom mine, 150,000 tons of asbestos were shipped for export.

CSR closed the mine in December 1966 citing lack of profitability and falling asbestos prices. The following year the mining of blue asbestos was banned.

Deaths related to absestos of people living and working in Wittenoom were first recorded in the 1960s and the number continues to rise.

Studies suggest that at least a quarter of the people who worked at the mine will eventually die from mesothelioma or another asbestos-related disease. CSR closed the mine in December 1966 citing lack of profitability and falling asbestos prices. The following year the mining of blue asbestos was banned.

Though she knows every day she stays in town is another day she continues to breathe the deadly material, Ms Thomas and her family hope authorities understand she just needs to stay a little longer .

The closure of Wittenoom was announced in 2006 and came into effect from 2013, Mrs. Thomas is the last resident of the town (pictured the remaining houses in Wittenoom).

The town has been removed from most maps and road signs advising it have been removed, instead the area in and around Wittenoom is covered with signs (above) warning of the presence of deadly asbestos

Desolate photos show that most of the houses in which the city’s 20,000 residents lived have been demolished and replaced with warning signs.

The city has also been removed from most maps and street signs removed to discourage “dark tourists” from visiting.

Aileen said it was these tourists that made her mother’s move seem pointless.

The Wittenoom asbestos mine, owned by CSR, was closed in 1966 after it became unprofitable and local residents suspected that it was related to health problems (pictured, asbestos).

“Regardless of who lives there, there will still be people walking through the city or the area,” she said.

Ms Thomas was awarded $350,000 in compensation for the move, along with all other displaced residents of Wittenoom.

The city has become a popular spot for “dark tourists” (above), which is frustrating for Ms Thomson’s family, who feel there is “no point” in leaving them

The Wittenoom tragedy inspired Midnight Oil’s hit song Blue Sky Mine and went down in history as Australia’s worst human and environmental waste.

In December 2006, the Western Australian Government announced that the town’s official status would be revoked, and it was removed the following year.

A Wittenoom steering committee met in 2013 to complete the closure of Wittenoom, restricting access to the town and raising awareness of the risks of entering.

Ms. Thomas will be the last resident of the disaster area.

https://www.dailymail.co.uk/news/article-11163193/Wittenooms-resident-leave-town-asbestos-destroyed-abandoned.html?ns_mchannel=rss&ns_campaign=1490&ito=1490 Wittenoom’s last resident to leave before the town and its asbestos mine are destroyed and abandoned