A young woman drowned in the sea after being swept away by waves while she and her boyfriend were taking photos of a famous lighthouse near Beachy Head in Eastbourne, an inquest has learned.

Pharmacist Dora Mango, 26, was found floating face down in the sea off the beach in the town of East Sussex.

Ms Mango and her boyfriend Jerry had traveled to the coast on a sightseeing tour from their home in Redhill, Surrey.

But she was swept off a rock and despite Jerry’s best efforts to dive in and save her, the 26-year-old drowned.

The Hungarian-born woman walked along the cliff base at Beachy Head to snap photos of the nearby Belle Tout lighthouse.

After walking for a while, the pair noticed that the tide was coming in quickly and soon realized they were trapped.

The couple were soon stranded on a small stretch of beach and at that point knew to call for help but were unable to get a signal.

In a statement, Jerry revealed Ms Mango had climbed a rock while he was swimming to get help, but it would be the last his girlfriend was seen. 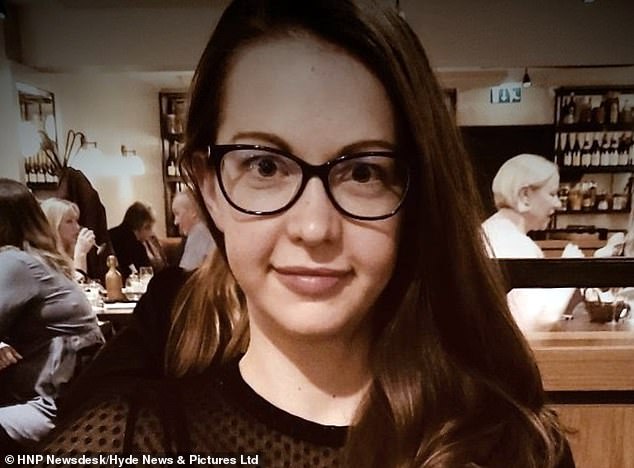 Pharmacist Dora Mango (pictured), 26, was found floating face down in the sea off the beach in Eastbourne, East Sussex

The young pharmacist had visited the seaside town with her boyfriend Jerry, but she was swept away by the rocks

“On October 24, we both used a metal staircase, both took photos and decided to go to the lighthouse. We stood about 500 meters from the lighthouse to take pictures. At that point, the tide was rapidly approaching,” his statement said.

“We said we had to go back and went back but got cut off by the tide. Just after noon we were both on a small part of the beach. We tried to call for help but there was no phone signal and we both yelled for help.

‘Dora stood on a rock and I swam about 50 meters around the top to the beach. I found a couple on the beach and an elderly man called emergency services. That was when the tide had come in somehow.”

Despite receiving CPR and being flown by helicopter to King’s College Hospital in London, Ms Mango (pictured) died at 4pm on October 24

According to the Maritime Coastguard Agency, a rescue team was launched, as well as two helicopters and several lifeboats.

After finally finding her wife, Mango, she was brought ashore and received CPR while being flown to King’s College Hospital in London.

But doctors pronounced the pharmacist dead at 4 p.m. after she had arrived at the hospital half an hour earlier without a pulse. The entire incident lasted an hour and 40 minutes.

Stewart Walker, who called 999 on Jerry’s behalf, told the inquest: “Jerry walked up to us and we could see he was soaked through. I don’t think he was wearing shoes, he was desperate. He told us his girlfriend was stranded around the corner and she was still there.

‘I went back as far as I could to get a signal. I called 999 about 4 times because the signal kept dropping. We were trying to see if we could use our harnesses to get around the rock, Jerry was screaming in pain, it’s incredibly painful to walk on the pebbles there.

Mr Walker said the pair then saw two backpacks floating in the water, prompting Jerry to jump in immediately, but he had to get out again due to the rough conditions.

After the Coast Guard arrived, Mr. Walker recalled being concerned for Jerry’s well-being. “Jerry looked gone, he was floored, I was worried about him,” he said.

“He looked broken, lost and abandoned.”

The Hungarian-born woman walked along the cliff base at Beachy Head to snap photos of the nearby Belle Tout lighthouse. (File image by Belle Tout)

Coroner David Tye conducted an inquest at Birling Gap to see if there were tide warning signs at the point where the couple walked down to the beach.

He told the hearing: “There were signs saying ‘No exit at high tide’ and ‘No safe access beyond this point’. There were hiking times and a tide schedule. There were clear signs to warn strays.’

But Mr Walker, who visits this beach area several times a week, interrupted the inquiry by saying: “These signs are new. They used to have just a board with times.’

Coroner Ms Bradford concluded: “The post-mortem examination of Ms Mango’s body concluded that the cause of death was seawater immersion and probable drowning.

“They wanted to go down to the beach, but the action went wrong and unfortunately Dora died. The short version of Dora Mango’s death is an accident.’

https://www.dailymail.co.uk/news/article-11178215/Woman-26-drowned-sea-swept-rocks-waves-took-photos-lighthouse.html?ns_mchannel=rss&ns_campaign=1490&ito=1490 Woman, 26, drowned in the sea after being washed off rocks by waves while taking photos of the lighthouse