A woman who was hiking with her husband tragically froze to death after he ran for help, only to return to find she had succumbed to the cold.

The 33-year-old husband and 31-year-old wife started their journey on Tuesday and stayed in Zion National Park.

Temperatures dropped overnight and the woman showed signs of hypothermia, while the man was injured.

They were walking a 16-mile stretch through the Narrows on Wednesday morning when they decided to stop and part ways so the husband could get help for both of them.

The woman stayed behind at her stopping point about a mile and a half from the north end of the Riverside Walk – a paved path that leads from the Temple of Sinawava to the Narrows.

Eventually, the husband found park rangers on the way and alerted them to the situation – they took him to a medical center.

Before the rescue teams from Zion arrived, other visitors gave the woman CPR. But it was too late and by the time the husband and rescuers returned, she had died. 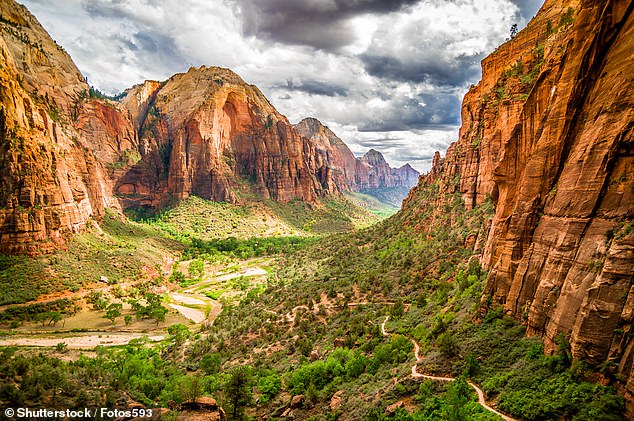 The husband and wife started their journey on Tuesday and stayed at the park in Utah. Temperatures dropped overnight and the woman showed signs of hypothermia, while the man was injured. Pictured: Zion National Park

Authorities have not released the couple’s identity.

The 33-year-old died the same day that rescue workers found the body of a teenager who had frozen to death after missing a turn while descending and getting lost on a hike.

She had achieved her goal of climbing all 48 peaks in the state.

Emily went hiking alone on Sunday morning and was dropped off at the trailhead by her mother. While a cause of death has not yet been confirmed by an autopsy, police believe she died from exposure.

Friends have paid tribute to the 19-year-old, who was set to turn 20 this week. Her goal was to climb all 48 of New Hampshire’s peaks before her 20th birthday.

“She reached all three peaks she wanted to reach and unfortunately on the descent she missed the turn that is hard to find on a windy day or just in general.

“This has happened before, in the exact same spot that she went astray, in 2021. Luckily these guys made it happen by thawing her phone under her armpit and SAR found her before she did.” frozen,” her friend and fellow hiker Brian Garvey said.

Emily Sotelo, originally from Massachusetts, made it to her intended destination but eventually succumbed to sub-zero temperatures that plummeted to 0 degrees Fahrenheit. Her body was found on Wednesday, on her 20th birthday

Her body, officials said, was found on the northwest face of Mount Lafayette, within the boundaries of Franconia Notch State Park, where she set out for a hike four days earlier. It’s not yet known when or how she died, but officials said Wednesday it was likely due to exposure

“She was cute and so happy to be out in the woods. She was young and ready to do anything,” Jessie Callaghan, who she met on a previous hike, said on Facebook.

The extended four-day quest The effort, they added, was “hampered by strong winds, cold temperatures and blowing snow” – ultimately confirming suspicions that Sotelo could not have survived these conditions alone.

After the grim discovery, officials called in a National Guard helicopter to retrieve Sotelo’s body from the mountain face.

Fish and Game Commissioner David Walsh warned hikers of the dangers of hiking the state’s notorious White Mountains, which are widely regarded as treacherous in winter.

“The biggest lesson learned in a tragedy like this is when hiking in New Hampshire, especially in the White Mountains, be prepared for the unexpected,” he told WMUR-TV.

During their search, officials said, temperatures dropped to “roughly zero,” with wind speeds increasing the chilling factor to -30 degrees Fahrenheit.

Walsh warned others with plans to climb the dangerous mountain range to take necessary precautions and take seriously the dangers that come with the winter season.

Officials’ four-day search, they added, was “hampered by strong winds, cold temperatures and blowing snow” – ultimately proving their suspicions that Sotelo could not have survived the conditions on his own

New Hampshire conservation officials said at 11:15 a.m. search parties found the body of Sotelo, a 5-foot-3-foot tall sophomore, at Vanderbilt University. An avid hiker, she came close to her goal of conquering New Hampshire’s 48 peaks over 4,000 feet near the age of 20

Sotelo, her parents said, had planned to hike various trails in the area but wasn’t dressed for the freezing cold weather that set in shortly after she left.

Temperatures dropped to “about zero,” with wind speed increasing the chilling factor to -30 degrees Fahrenheit, officials with the Pemigewasset Valley search and rescue team said Sunday as they began their search.

Fish and Game officers and volunteers from more than a dozen search and rescue teams then spent the next few days combing the area with planes and sniffer dogs, eventually finding a trail and items left behind by Sotelo in the headwaters of the Lafayette Brook on Tuesday afternoon.

However, by nightfall, officials downgraded their efforts from a rescue mission to one related to a just recovery.

“Pemi has three teams tonight looking for this missing hiker,” the search team said in a post on Facebook at the time.

Officials said Wednesday that Sotelo, an avid hiker, was close to meeting her goal of conquering New Hampshire’s 48 peaks over 4,000 feet before she turned 20.

“Sunday night weather conditions were single digit temperatures, 40 to 60 mph winds, blowing snow and she was not dressed appropriately for those temperatures,” Walsh told WMUR-TV on Wednesday.

“These are extreme conditions and then she went astray.”

Sotelo was a sophomore in biochemistry and chemical biology at Vanderbilt University in Nashville.

In a letter to students on Wednesday, Vice Provost GL Black mourned the loss of Sotelo and noted how she had become an active member of the community since transferring from the College of William & Mary earlier this year.