The family of a woman who ‘bled to death’ after being forced to wait 15 hours in an ambulance outside an A&E department are angry and have demanded ‘answers’.

An ambulance had been called for 70-year-old Marie Shenton to take her to Torbay Hospital in South Devon after she was found vomiting blood.

She was taken to hospital quickly as a category one emergency, but on arrival her long wait began and she was kept waiting in the ambulance, despite paramedics warning of her worsening condition.

Mrs Shenton’s sister Bridget Haynes said ‘to die the way she did, it wasn’t humane’, attributing the long wait in an ambulance to her sibling’s death. 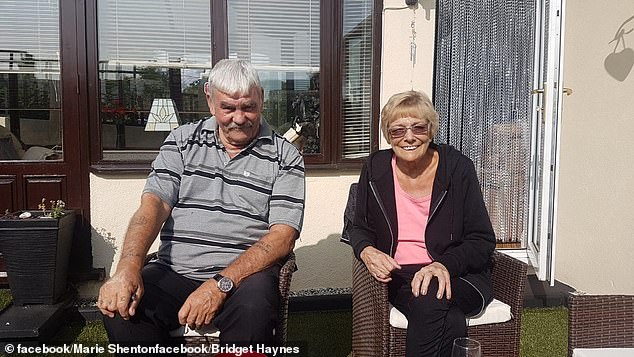 Marie Shenton (right), 70, died at Torbay Hospital after she was forced to wait outside A&E in an ambulance for 15 hours

She told Sky News: ‘My sister’s dead because she was in an ambulance for 15 hours and that’s not right. That’s just not right.

‘To die the way she did, it wasn’t humane. You wouldn’t let the dog suffer like that.’

While waiting outside the hospital on November 27 Mrs Shenton began vomiting more blood, so a nurse was sent out of the hospital to take a blood test.

Paramedics then helped her go to the toilet where she ‘was just passing pure blood’ so paramedics informed staff again, but her sister said, ‘nobody came’.

Initially Mrs Shenton remained in a good mood ‘chatting, laughing and joking’ and ‘talking about Christmas’ with her family, Mrs Haynes said.

Even though she was a category one emergency, Mrs Shenton was left in an ambulance outside Torbay Hospital for 15 hours

But her condition had deteriorated significantly when she was finally admitted to the hospital, ‘just mumbling’ saying ‘thank you, sorry, thank you’.

Three days later on November 30, Mrs Shenton’s family were notified that her condition had worsened again and upon arrival they were told she had fallen out of her bed.

She died later that day.

Mrs Haynes, who worked in the NHS for 37 years until 2017, said she ‘can’t believe’ what is happening to the health care service, adding that ‘it’s scary, very scary’.

Mrs Haynes, who arrived at the hospital ten minutes after her sister died, told Sky: ‘I am just so angry about it. She bled to death.

Mrs Shenton’s sister Bridget Haynes told Sky News ‘My sister’s dead because she was in an ambulance for 15 hours and that’s not right. That’s just not right.

NHS ambulances were slower than ever in December, with heart attack and stroke victims waiting horrifying delays of up to six-and-a-half hours

‘It shouldn’t have happened. I am just so angry about it. I just want some answers.

‘I want to know why my sister fell out of bed for a start, and why in this day and age – 15 hours in an ambulance?

‘We’re like a third-world country. And we’re one of the richest countries going and this is happening. It’s not right.’

The former NHS worker, whose sister was her ‘best friend’ said while the paramedics were ‘absolutely brilliant’ and did ‘everything they could’ for her sister, she called on the Government to ‘do something’ to help the crisis.

She added: ‘If I ever have to go into hospital, I think I would just stop here. There’s no way I am sitting in an ambulance for 14-hours or even eight hours.’

A Department of Health and Social Care spokesperson said: ‘No one should have to wait longer than necessary for emergency care, which is why we are taking urgent action to support services.

‘We recognise the pressures the NHS is facing and the Health and Social Care Secretary announced up to £250 million of additional funding to immediately help reduce hospital bed occupancy, alleviate pressures on A&E and unlock much-needed ambulance handovers.

‘This is on top of the £500 million Discharge Fund to speed up the safe discharge of patients who are medically fit to leave hospital, and the NHS creating the equivalent of 7,000 more beds as well as establishing 24/7 data driven system control centres in every local area to manage demand and capacity.’

The Royal College of Nursing union announced that more walk outs will be planned in February if no movements are made over the ongoing pay dispute. Pictured: Nurses and supporters at Whitehall during industrial action in December

The Trust’s medical director Ian Currie told Sky: ‘We would like to send our heartfelt condolences to Mrs Shenton’s family.

‘We cannot comment on individual cases due to patient confidentiality but remain in contact with her next of kin.

‘We don’t want anyone waiting in an ambulance longer than necessary and all patients arriving at our emergency department are triaged and assessed, with the most clinically urgent being prioritised.

‘We work closely with South Western Ambulance Service NHS Foundation Trust to make sure everyone waiting in an ambulance is robustly assessed, monitored, and their care is escalated and prioritised appropriately.’

The Government is coming under increasing pressure over the ongoing crisis in the NHS, which has seen ambulance staff, paramedics and nurses walk out in a series of strikes.

The Royal College of Nursing union have announced that even more walkouts will be planned, if pay negotiations remain on the table by the end of the month.

Last week 25,000 ambulance workers, including paramedics, call handlers, drivers and technicians, downed their tools and joined picket lines across the country. Pictured: Members of the London Ambulance Service on the picket line

If the industrial action goes ahead, twice as many workers would be taking action in February if an agreement cannot be made.

The RCN initially demanded a 19 per cent pay rise but has since indicated it would accept a 10 per cent increase.

Downing Street, however, is thought to be considering a one-off payment to nurses in a bid to stop industrial action.

Among the workers on the picket line, was a former nurse, Tanya Palmer, from Forest of Dean in Gloucestershire, who said she was supporting the workers after her mother died following a four-hour wait for an ambulance.

The 55-year-old former NHS nurse, who is now a regional manager for Unison, told of how her mother Christine had ‘lay unconscious on the floor for four hours because of ambulance delays’ after suffering a stroke.

Former NHS nurse Tanya Pamer (left) stood on the picket line with ambulance workers last week, saying she joined after her mother Christine (right) was left lying on the floor unconscious for four hours waiting for an emergency vehicle. She later died

Standing on the picket line, Ms Palmer said, ‘that’s my personal story and why I am out here today’.

Prime Minister Rishi Sunak branded the industrial action ‘terrifying’ while speaking in the House of Commons.

His response was provoked after Sir Keir Starmer criticised the Prime Minister on the ‘terrifying’ NHS cancer treatment delays affecting people across the country.

Mr Sunak responded: ‘What’s terrifying is that right now people not knowing whether when they call 999 they will get the treatment that they need.’

It was the second round of industrial action, following the first walk outs in December.

It comes as NHS ambulances were slower than ever in December, with heart attack and stroke victims waiting horrifying delays of up to six-and-a-half hours.

NHS ambulances were slower than ever in December, with heart attack and stroke victims waiting horrifying delays of up to six-and-a-half hours. Picture: Stock image of ambulances

The shocking figures illustrated the dire state of emergency care in the country, with 999 crews taking on average 93 minutes to respond to category two calls in England.

It is the worst-ever month for emergency calls by half-an-hour.

Health Secretary Steve Barclay said: ‘Across the UK, Europe and internationally, health systems are seeing a significant impact on operational performance due to the impact of the pandemic, the rapid spike in flu, Strep A and the ongoing high levels of COVID.

‘That’s why, as I set out this week, we’re taking urgent action to ease pressures on A&E, including investing an additional £200m to get medically fit patients out of hospital quicker and boost the social care workforce, on top of our £500m discharge fund, creating the equivalent of 7,000 more beds through innovations like virtual wards, and putting £50m towards expanding capacity in emergency departments through new discharge lounges and ambulance hubs.’

Category One: Where are ambulance response times the worst?

In December 2022, the national average response time for a category one call – for people with life-threatening illnesses or injuries, such as cardiac arrest sufferers – was 10 minutes, 57 seconds.

The average category one response times per region were:

https://www.dailymail.co.uk/news/article-11637097/Woman-dies-forced-wait-ambulance-outside-E-department-15-hours.html?ns_mchannel=rss&ns_campaign=1490&ito=1490 Woman dies after being forced to wait in an ambulance outside A&E department for 15 hours