A serial killer-obsessed mother “giggled” after brutally stabbing her lover before video calling a friend to show her the body, a court heard today.

Shaye Groves, 27, who had portraits of notorious killers like Ted Bundy and Jeffrey Dahmer framed on her bedroom wall, reportedly told a friend “I took him down” after launching an attack on sleeping boyfriend Frankie Fitzgerald.

The mother-of-one, who owned a set of decorative knives adorned with movie villains, is said to have used bladed items for “knife games” in the bedroom and enjoyed masochism, bondage and submission with Mr Fitzgerald at her home in Havant.

Groves, who denies murder, allegedly stabbed her boyfriend 22 times in a “crime of passion” on July 17 last year before creating a “false alibi” by taking inspiration from true crime documentaries. 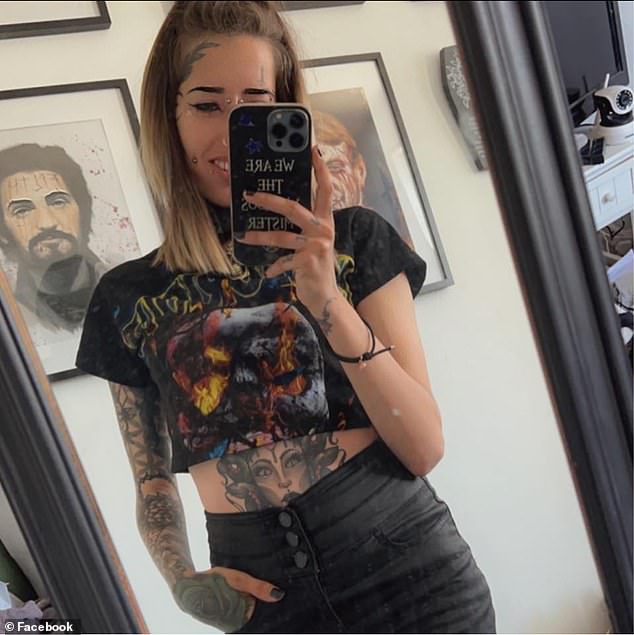 Shaye Groves, 27, who had portraits of notorious killers like Ted Bundy and Jeffrey Dahmer framed on her bedroom wall, reportedly told a friend “I took him down” after launching an attack on sleeping boyfriend Frankie Fitzgerald

Groves and Mr Fitzgerald had rekindled an old relationship after meeting at a pub in Cosham, Hampshire, in January last year.

The court heard how Groves became “obsessed” with Mr Fitzgerald’s “performing in the bedroom”, with the couple’s sex life involving bondage, dominance, submission and masochism.

Jurors heard today at Winchester Crown Court that after the murder, Groves video-called his girlfriend Vikki Baitup, who was horrified to see his body with “an enormous” knife wound.

Groves allegedly sent Ms Baitup a message in the early hours of July 17, in which she hoped to create a “false alibi” by stating that Fitzgerald had left her home.

Ms Baitup told police how she received a call from a “giggling” Groves, who was having a “very normal conversation” in which they discussed their weekend.

Groves then started a video call, during which she went upstairs to her bedroom and pointed the camera at Fitzgerald before saying, “I finished him off,” the court heard.

The jury heard Ms Baitup, who “couldn’t believe it was real,” ask the couple if they “have me on” – after which Groves went back to her bedroom to show her Mr Fitzgerald’s body – in a Duvet wrapped and lying on garbage bags – twice more.

At one point during the call, when Ms. Baitup raised her voice, Groves told her, “Shhh, the kids are in the house.”

“I don’t think I really understood what happened before. The wound was so deep – it was enormous.”

Police at the scene on Boltley Drive, Havant, following the suspected murder of Mr Fitzgerald

Ms Baitup reported the incident to police and said: “I observe crime scenes but this is too real – there was a massive laceration on his neck.”

The court heard Groves (above) become “obsessed” with Mr Fitzgerald’s “performing in the bedroom,” with the couple’s sex life involving bondage, dominance, submission and masochism

In response to Grove’s ‘calm’ explanation of what had happened – that she checked his phone and saw that he was texting “a teenage girl” – Ms Baitup said: “While he was sleeping she stuck the dagger through it his neck and that’s when he woke up.

“He was asleep, she wasn’t even in danger. I could understand when he attacked her, but she told me he was asleep and he couldn’t even fight back.

The jury heard from Ms Baitup that Groves had four “decorative” knives hanging on the wall for her and Mr Fitzgerald because “both of them played with knives during intercourse”.

The four knives had depictions of Chuckie, Jigsaw and Pennywise and hung alongside two axes – all of which were “easily accessible to anyone”.

Ms Baitup told the court Groves had “watched enough murder documentaries” – to know her plan of burying Mr Fitzgerald’s body “in the back garden” would not work.

Such was her interest in killers that, according to Ms. Baitup, Groves had framed portraits of notorious serial killers such as Ted Bundy and Jeffrey Dahmer.

The jury heard from Ms Baitup that Groves was also known to carry a knife “for security reasons” when he went out alone in the evenings.

At the end of the call, Ms Baitup said Groves’ last words were, “We’re still friends, aren’t we?”

The court heard a pathologist’s report, which explained that Mr Fitzgerald was stabbed 17 times in the chest, twice in other areas of the chest and three times in the neck – leading to his death after “multiple perforations of the heart and lungs” and “catastrophic ‘ resulted in blood loss’.

Footage of officers arriving at the scene was previously played to the court, which reported an “incredibly strong” smell of bleach in the bedroom.

Groves could be heard saying, “I was going to call you myself. I don’t know what the hell happened.

She also claimed he tried to hurt her and said she had video footage of him raping and assaulting her.

“I still took someone’s life. The knife I used is in the sink – the cut on his neck is pretty bad, when I put it down his neck he passed out.”

Groves denies the murder and claims she acted in self-defense.

The process, which is expected to take four weeks, continues.

https://www.dailymail.co.uk/news/article-11640795/Serial-killer-obsessed-woman-stabbed-lover-death-slept-giggled-called-friend.html?ns_mchannel=rss&ns_campaign=1490&ito=1490 Woman obsessed with serial killer ‘stabbed lover to death while he slept, then giggled when she called boyfriend’