A video of a woman being rescued from rushing flood waters in devastated California has surfaced online.

In the clip taken in Laguna Hills, the woman – who climbed up a tree to get out of the high waters – can be seen plucked by an Orange County firefighter and hoisted out of danger.

The fire agency utilizes a helicopter to lower a firefighter into the area to grab the woman and bring her to safety.

The rescue in Orange County is just one incident in a series across the state which has recently been battered by atmospheric river storms that have caused more than 24 trillion gallons of water to fall and resulted in the deaths of 19 people. 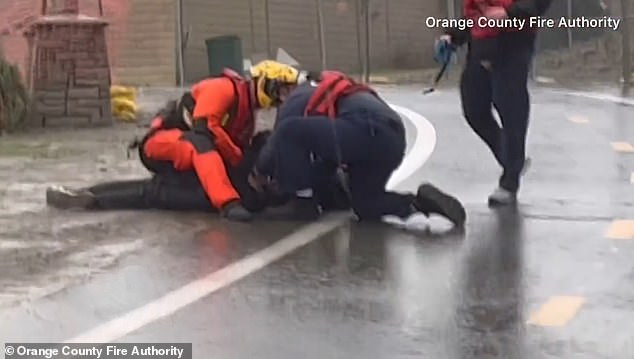 The woman was brought back to safety after being rescued

The rescue took place around 3.30pm Saturday at Aliso Creek near the 24400 block of Christina Court in the Southern California city.

Upon arrival, the Orange County Fire Authority crews found a woman clinging to a tree above the creek, just above rushing waters.

The group of firefighters and rescuers had first attempted to reach the woman from the ground but were unable to.

‘Crews set up for rescue from ground level and by our helicopter,’ the organization said in a tweet.

The group was unable to reach the woman by ground which is why the helicopter was brought in to assist.

‘The victim, a young adult, was picked by our helicopter rescuer and ultimately lowered to the ground where she was reunited with family,’ the Orange County Fire Authority said.

A helicopter assisted in the terrifying rescue

The video caught the eyes of social media users who thanked the firefighters and rescuers for their brave and heroic actions.

‘Incredible work and footage, @OCFireAuthority,’ said the California Department of Forestry and Fire Protection. ‘Thank you for sharing and be safe!’

‘A great job. We were in the area and were so relieved and grateful to the rescue team,’ said one woman in a tweet.

‘Now THIS is protection and service. Thank you for all y’all do,’ wrote another.

Officials are now using the dramatic incident as a way to remind residents to stay safe when it comes to flooding.

‘As the water continues to fill up waterways, we strongly urge everyone to stay away from the water,’ the OCFA said in a tweet.

After being lifted from the creek, the helicopter brings them over solid ground

In Northern California, a woman was rescued from ‘dire circumstances’ after her vehicle became trapped in flooding.

The woman’s vehicle was swept up in the water, according to the Butte County Sheriff’s Department.

She was attempting to make it through the water, which was ‘at least a few feet deep’ according to one local outlet, but her vehicle eventually left the roadway.

Rescuers were able to use an inflatable search boat to paddle through the high waters and gain access to the stranded resident.

The group reached the woman and brought her back to land and safety.

Pictured: A vehicle is seen sunken into the mud after the driver, a Santa Barbara Photojournalist, attempted to evacuate from her home

The flooding created mudslides across the state, including in Montecito, which is home to Prince Harry and Meghan Markle

The incidents are certainly not isolated as there have been dozens of rescues statewide in recent weeks.

Since December, the Golden State has seen 24 trillion gallons of waterfall.

The rain has caused major flooding and destruction from San Diego all the way up to Eureka, and 19 people have died in weather-related incidents.

Some estimates indicate the storms, caused by a series of atmospheric rivers, have caused more than $1 billion in damage.

The torrential downpours triggered rock and mudslides in some areas, including Malibu where cars and homes were damaged by massive boulders flowing down hillsides.

Both lanes of the Glenwood Rd off Highway 17 near Scotts Valley were washed out by heavy rain the previous night. Road crews worked all morning in the Santa Cruz Mountains

A drone view of a tree that fell during a winter storm with high winds in Sacramento, California

Some of the rain was welcome, however, as major portions of the state have spent months in a drought caused by dry and warmer-than-usual conditions.

As of January 17, however, some areas are now reporting reservoirs in excess of 100 percent full.

In Santa Clara County, just southeast of San Francisco, four reservoirs have reached their ‘full’ levels, with one at 111 percent capacity.

In Central and Southern California, the water facilities have not reached 100 percent full but have seen an increase from the rain.

Pictured: Harry and Meghan’s neighborhood in Montecito, California is inundated by flooding on the exact anniversary of 2018 Montecito Mudflows

California saw no relief from drenching rains on Tuesday as roads near Watsonville turned into gushing rivers, forcing evacuation of thousands in towns with histories of deadly mudslides

A boulder damaged one car on Pacific Coastal Highway in Malibu

This ‘big rock’ fell directly onto a roadway in Malibu, completely cutting off access to both sides

Despite the assistance the rain has given the dry and warm state, it has certainly caused more damage than it helped.

The orders give the state special access to federal funds and resources that will be desperately needed to assist with the estimated $1 billion in damage.

California Governor Gavin Newsom had asked him and the federal government to step in after he declared a state of emergency for the storms.

Pictured: A man runs from the spray of waves hitting and going over the breakwall of Redondo Beach, CA, Harbor, in the wake of a storm that cleared the south bay community of Los Angeles County, Thursday, January 5, 2023

Damage to a jetty is seen in Capitola Wharf on January 6, 2023 in Capitola, California

On Monday, DailyMail.com reported on how the National Oceanic and Atmospheric Administration is facing backlash over their inability to predict the devastating storm.

The organization, which releases seasonal forecasts, predicted back in October that the Golden State would have a below-normal amount of precipitation in Southern California.

NOAA also in their winter forecast predicted neither drier, or wetter than normal conditions for Northern California, which encapsulates cities like San Francisco and San Jose.

Many areas of the state saw 200 to 600 percent more rain than normal.

In some parts, residents experienced 10 to 20 inches of rain while more than 200 inches of snow fell in certain northern, inland cities.

‘You really can’t rely on the general longer-range forecast for watershed management,’ said one official who works in water resource management.

This is the forecast NOAA released in October, showing that much of California would see less rain that normal for the winter months

In reality, the series of atmospheric rivers that have hit the state have done an estimated $1 billion in damage