Directors of World Cup television “have been instructed to show FIFA President Gianni Infantino at least once during every match in Qatar”… but not when he’s on the phone, and only above the knee when sitting next to a sheikh!

World Cup television directors have reportedly been ordered to show FIFA President Gianni Infantino at least once during matches – but not when he is using his mobile phone.

Infantino managed to attend at least part of all 64 matches during the Qatar tournament and was regularly featured on television broadcasts around the world.

According to The Times, there were strict rules as to when Infantino could be shown by the host broadcast service [HBS]the Switzerland based company used for World Cup matches. 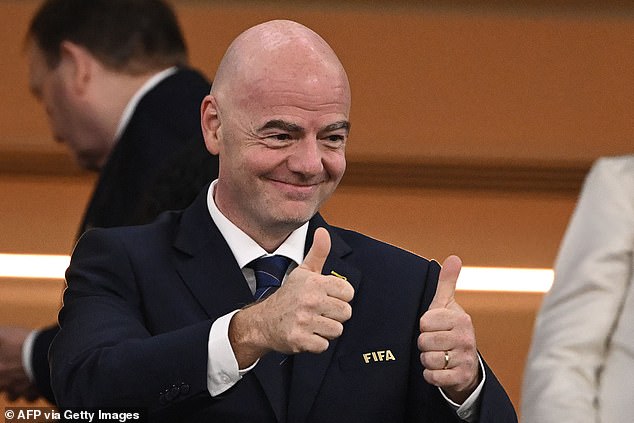 According to reports, TV directors at the World Cup were instructed to show FIFA President Gianni Infantino at least once during each match

Infantino, pictured after presenting the trophy to Argentina’s Lionel Messi, was able to take part in at least part of all 64 matches of the tournament

Game directors were reportedly told that Infantino should be featured at least once during the broadcast, but he shouldn’t be shown when he was on his phone.

When Infantino was seated next to a sheikh, to protect cultural sensibilities, no pictures could be shown below the knee.

The Times said there was at least one occasion when the TV feed to Infantino cut while he was on his phone and the directors received a dressing.

The television pictures supplied by HBS are bought by the BBC and ITV and all other broadcasters that pay FIFA for the World Cup rights.

However, TV footage had to be cut away when Infantino (left) was talking on his cellphone

These broadcasters have no say in the delivery of the feed, but use the images provided.

HBS is a subsidiary of Infront, which was acquired by China’s Wanda Group in 2015. Wanda is a FIFA sponsor.

Infantino proved a controversial figure throughout the World Cup, from his stunning speech defending Qatar’s human rights record on the eve of the tournament to questions about why celebrity chef Salt Bae – aka Nusret Gokce – was allowed onto the pitch at Argentina’s trophy presentation.

Salt Bae harassed Messi with photos and had a photo taken with the trophy in violation of FIFA rules. The governing council is investigating.

Infantino was also criticized this month for taking selfies in front of Pele’s open coffin ahead of the Brazilian icon’s funeral.

The FIFA president insisted he was asked for the selfie by the footballer’s grieving family and old team-mates, leaving him “humbled”.

https://www.dailymail.co.uk/sport/football/article-11631031/World-Cup-TV-directors-given-Gianni-Infantino-instructions.html?ns_mchannel=rss&ns_campaign=1490&ito=1490 World Cup television directors in Qatar were “ordered to show Gianni Infantino at least once per game”.

Who's going to get Graceland? Lisa Marie's 14-year-old twins and Hollywood star daughter may inherit