The new energy price guarantee came into effect yesterday, meaning the energy bill of a typical UK household will rise from £1,971 to £2,500 over the next two years.

Although the increase is significantly lower than previously planned, it is still twice as high as a year ago.

The exact amount you have to pay depends on how much energy you use. But as winter sets in, millions of consumers will be faced with the choice of reducing their energy consumption or falling into energy poverty.

Follow our handy tips and advice to save energy, reduce your bills and reduce your carbon footprint quickly and easily.

Turning your thermostat down just one degree will lower your heating bill and you may not even feel the difference. This could now save up to £321 a year, says utility Utilita.

Most families are happy with a temperature between 18°C ​​and 21°C, but it can be warmer for the elderly or vulnerable. Loop, an app that tracks smart meter data, warns that even leaving electric underfloor heating on for an extra hour a day will cost £567 a year under the new cap. 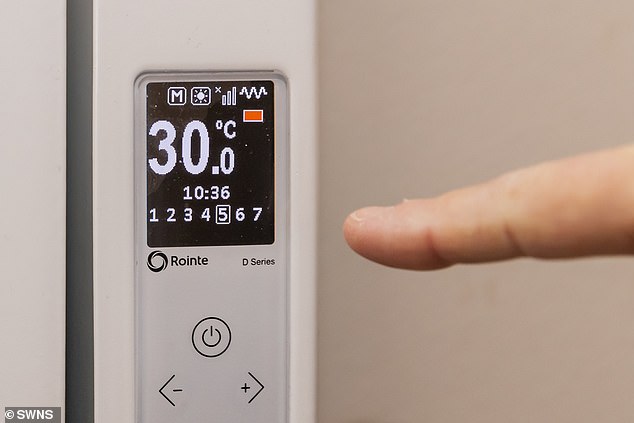 (Stock photo) Smart heating controls like Hive, Nest and Honeywell can lower your bills and improve your comfort by making better use of the heating energy you pay for

2. TURN THE LIGHTS OFF

Lighting accounts for around 11 per cent of the average UK household electricity consumption. So encourage your family to turn off all lights when you are not using them or when you leave a room. This will save you at least £25 a year on your annual energy bills, says the Energy Saving Trust. Use a sensor to control the outdoor lights so they’re only on when they need to be.

3. GET FORWARD ON LED

LED (Light Emitting Diode) technology is the next best option for turning off a switch. LED bulbs use up to 90 percent less energy than traditional halogen bulbs, are inexpensive, last longer and could save hundreds of dollars.

Although they cost more to buy, they last ten years with regular use. The prices are also falling. Even for brands like Philips, they’ve dropped to £20 for six.

Switching to energy-efficient LED lighting will save the average UK family (over a year based on new electricity prices) £18-22 per bulb. According to Signify, which is owned by Philips and did the analysis, it would save a typical home £300 a year. A similar analysis by smart lighting experts 4lite shows that a single LED bulb now costs less than 4p a day, based on six hours of use.

Older bulbs can cost up to 20p a day.

4. TIME TO GET SMART WITH TAXES

Smart heating controls like Hive, Nest, and Honeywell can lower your bills and improve your comfort by making better use of the heating energy you pay for.

Consumer Group Which? estimates that a medium-sized household could save at least £100 a year and reduce the home’s carbon emissions by 320kg a year by using smart controls. The savings depend on the efficiency of your central heating and how you previously heated your home.

(Stock Photo) Household energy bills are set to soar to an average of £2,500 over the next two years

You can save at least £65 a year simply by switching your devices off standby, says the Energy Saving Trust.

Consider getting a standby saver or a smart socket that allows you to wake up all your devices at once. Some satellite and digital TV recorders may need to stay connected in order for them to be able to track all the programs you want to record.

Many consumers unknowingly overcharge their cell phones and other devices with a clutter of chargers.

Instead, make a habit of unplugging it from the outlet as soon as your device is fully charged. This saves energy and extends battery life.

6. Be smart with your daily cup of coffee

The Energy Saving Trust says using less water in the kettle saves us at least £13 a year.

This is based on the fact that the average household half-boils their kettle 24 times a week – three times more than it takes for a cup of tea or coffee. His research found that filling the kettle with just as much water as you need has the potential to prevent two million tonnes of carbon dioxide being released into the atmosphere and save homes across the UK £1.1 billion.

Under the new energy price cap, the average annual running cost of a washing machine will rise from just over £63 to more than £117, says consumer group Which?

You can reduce this by not running the machine for small and light loads. It’s more efficient to wait until you’ve filled the machine at least 80 percent.

Also remember to wash at 30°C, which reduces energy consumption by an average of 38% compared to a wash at 40°C, while washing at 20°C uses 62% less energy.

Avoid the tumble dryer. Dry clothes on racks or outdoors to save more money.

https://www.dailymail.co.uk/news/article-11271197/Want-save-700-year-Turn-heat-1C-switch-LEDs-unplug-chargers.html?ns_mchannel=rss&ns_campaign=1490&ito=1490 Would you like to save €700 per year? Turn the heat down 1°C, switch to LEDs and disconnect your chargers

Annuity number you need to retire and live a "comfortable" life, which will get you $545,000