A brand new virus has been detected in the Chinese laboratory at the center of origin of Covid.

Researchers at the Wuhan Institute of Virology discovered the pathogen, codenamed LsPyV KY187, in a mouse.

It belongs to a family of polyomaviruses that infect millions of children each year, but are extremely mild.

Scientists at the controversial lab made the find after testing hundreds of rodents in Kenya in 2016 and 2019.

The samples were then sent to the biochemical research facility in Wuhan, the city at the epicenter of the Covid pandemic, for analysis.

The new polyomavirus has been identified in a striped grass mouse, sometimes known as a zebra mouse.

This was revealed in a study published this month in the Chinese journal Virologica Sinica.

Because the new virus is not closely related to any known pathogens, its effect on humans “is unclear and needs further study,” the researchers said. 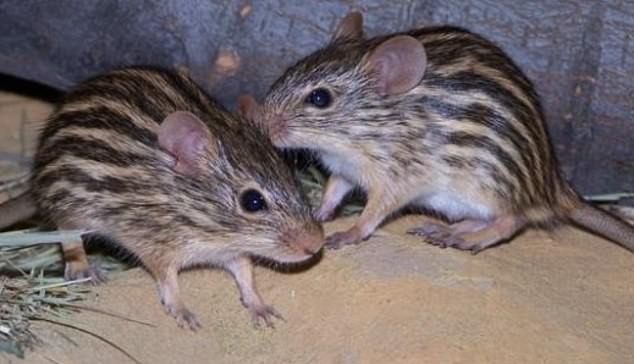 A brand new virus has been detected in the Chinese laboratory at the center of origin of Covid. It was discovered in Kenya in a striped grass mouse, sometimes known as the zebra mouse (pictured).

Whether the global outbreak started with a spillover from wild animals sold at the market or leaked from the Wuhan lab just eight miles across the Yangtze River has sparked heated debates about how to prevent the next pandemic. Now, two new studies point to natural spread at the wildlife market in Huanan. Positive swab samples from floors, cages and counters are also tracing the virus to stalls in the south-west corner of the market (below left), where animals with the potential to harbor Covid were then sold for meat or fur (below right).

The discovery shows how things are going as usual at the Wuhan lab, despite ongoing questions about its connections to the pandemic.

Covid started spreading at an animal slaughter market about 13 km from WIV, which was working with dangerous coronavirus.

Chinese officials stifled independent investigations into the lab and wiped out key databases containing information about the earliest Covid patients.

WIV researchers who contracted a mysterious flu-like virus months ahead of the official Covid timeline have been silenced or disappeared.

Pictured: The Wuhan Institute of Virology, where key data was deleted by Chinese scientists

Virologist Shi Zheng-li works with her colleague at the Wuhan Institute of Virology’s P4 lab in Hubei Province — the heart of the lab leak theory. Zheng-li, nicknamed “Bat Lady,” hunted down dozens of deadly Covid-like viruses in bat caves and studied them at WIV

Did Covid show up on the infamous wet market after all?

Fierce debate over the origins of the Covid pandemic was reignited last month after two new studies claimed to trace the outbreak to a notorious animal slaughter market in Wuhan.

One showed for the first time how the earliest human cases were clustering in a small radius around the Huanan Seafood Market in the winter of 2019.

Closer analysis of swabs taken from floors, cages and counters traces the virus back to stalls in the south-west corner of the market, where animals capable of harboring Covid were then sold for meat or fur.

A second study claimed to have pinpointed the exact date of the first animal-to-human infection — November 18, 2019 — after performing genetic analysis on hundreds of samples from the first human carriers.

The researchers behind this study also say they found evidence of another first-generation strain spreading to the wet market — which, if true, would place both original lineages within its walls.

Until recently, the only Covid cases linked to the market were Line B, which was thought to have evolved after Line A. Proponents of the accidental lab leak hypothesis used this as evidence that the virus only entered the market after it had evolved elsewhere in Wuhan.

However, critics downplayed or disputed the findings entirely, warning that both studies were conducted by the same group of academics who have regularly espoused the natural origin theory.

To read our story from back then, click here.

The so-called lab leak hypothesis was dismissed as conspiracy or xenophobia in early 2020. But over time, the theory has gained traction.

WIV experts have been working extensively on bat and other animal coronaviruses and are known to have experimented with Covid’s closest known relatives.

Controversial gain-of-function experiments have also been conducted, tinkering with viruses to make them more contagious or more deadly.

But there was never direct evidence that Covid first jumped to people at the facility.

And new research seems to support the idea that the Huanan seafood market was the true source of the pandemic.

The latest study, submitted to the scientific journal last November, included samples from 232 animals in five districts in Kenya.

The researchers studied 226 mice and rats, five shrews and a hedgehog, all of which are known carriers of zoonotic infectious diseases – those that spread to humans.

The samples were sent back to the WIV for PCR analysis.

Liver, lung and kidney tissues from each animal were screened for the presence of DNA viruses from seven families.

A total of 25 animals tested positive. In all but one case, the samples were traced back to pre-existing viruses.

However, further analysis showed that the new virus, polyomavirus, was only a 60 percent match for its closest relative.

The researchers wrote in the paper that the new virus was “not closely related to any virus known to cause disease in its small mammalian hosts or in humans.”

They added: “Their pathogenicity [ability to cause disease in humans] and the potential risk of zoonotic transmission are unclear and require further evaluation.’

About 80 percent of adults have had a polyomavirus infection at some point in their lives, most commonly in childhood.

The virus lives in the upper respiratory tract and people usually have no symptoms at all.

It is never completely flushed from the body and remains dormant throughout a person’s life – but most will never realize it.

In very rare cases, the virus can reactivate and multiply in immunocompromised patients, leading to kidney or even brain damage.

“As farming activities in rodent natural habitats increase in Africa, this underscores the need for continuous monitoring over a wide area, which could involve larger sample sizes and employ more high-throughput detection methods.

“Such programs will provide an important basis for future prevention and control of emerging zoonotic diseases.”

Storms Threaten US Coast: A developing tropical storm has an 80% chance of turning into a hurricane