Martin Lewis and OVO’s boss have fallen out over soaring energy prices after he called the energy tycoon a “fat cat” who “rips people off”.

Stephen Fitzpatrick, the energy company’s chief executive, has also described the coming months as “a winter like no other” during an appearance on ITV’s Good Morning Britain.

His warnings come amid growing fears that a cost of living Armageddon will lead to energy rationing and even blackouts as energy bills continue to rise.

Mr Fitzpatrick said “there are many things the Government can do over the next 12 weeks” to ease the cost of living crisis and “take some pressure off” UK households.

But Mr Lewis accused the energy chief of “sitting there and talking like that when you’re a fat cat who makes the profits and rips people off”.

The OVO founder replied, “There are many companies that are making extraordinarily high profits. Not necessarily by doing anything wrong, but they make a lot of money.

“I started a retail energy business 13 years ago, only in retail we only work on behalf of customers. We have no invested interests other than what’s good for customers.’

But Mr Fitzpatrick said today that non-payments would only serve to “raise the price on everyone else”.

He added: “Regarding the campaign for Don’t Pay [UK]I think we all understand that there will be millions of people in the UK this winter who are really struggling and will not be able to pay.

“But I think when I see campaigns calling on people that even those who can afford it don’t do it, I don’t think that’s really the British way. 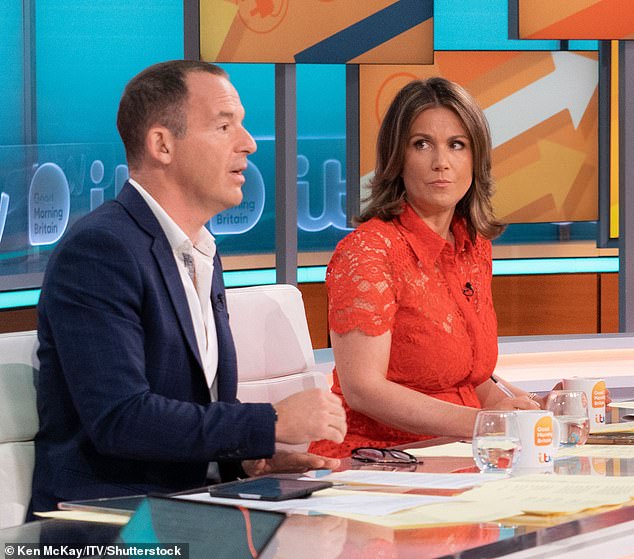 MoneySavingExpert founder Martin Lewis, who hosted the show with Susanna Reid, said the mass refusal to pay bills would cause problems for energy companies

Stephen Fitzpatrick (pictured), chief executive officer of energy company OVO, also described the coming months as “a winter like no other”.

Liz Truss, who is expected to be announced as the new Prime Minister at noon today, is said to be considering a £100bn package to freeze energy bills

“And I think we all know that sooner or later someone has to pay for it. And for those who don’t pay their bills, it raises the price for everyone else.

“And I think in this country, you know, I’m sure we can all agree, we believe in buying our round. You know, when it’s your turn to pay for a round of drinks, buy your round.

“We all know people can’t afford to pay this winter. And we have to support these people. Energy companies must support them.

“The government must support them. But we can’t just say we won’t pay.”

Mr Lewis, the founder of MoneySavingExpert, said such a “huge mass movement” would cause problems for energy companies.

He said: “What’s interesting is that people keep asking me what happens if people don’t pay?

“And if it was a huge mass movement, I think one of the options you had if people choose not to pay, rather than fight and can’t pay, is that you would take people to prepayment meters.

“But as an energy industry, you couldn’t make a million prepaid meters in winter. So we’re in unprecedented times when that should happen, aren’t we?

Mr Fitzpatrick replied: “We certainly are. And it’s the last thing any company wants in this position where we think about what you’re describing, but I would say, you know, we’ve had voluntary codes of conduct in the energy sector for years.

Mr Chalke described that energy bills for the schools he oversees have risen from £3million to £10million.

He has warned there would be further cuts and sacrifices to an already reduced education system to try to defray costs.

The school principal added: “We’re not going to give that up. We will continue.

“The cost is the cost, whether it’s ridicule or anger, we’re going to bear that because we have to keep an open mind.”

Wholesale gas prices rose again by around 30 percent this morning as markets reopened following Russia’s decision to block the reopening of the vital Nord Stream 1 pipeline to Europe.

State-backed Gazprom was due to reopen the supply line on Saturday after it was out of service for three days for planned “maintenance work”.

But Russia has kept it offline citing an “oil leak” after the G7 nations agreed to cap oil prices on Russian energy in further sanctions against the country.

Nord Stream 1 is the largest gas connection from Russia to Europe, delivering around 55 billion cubic meters per year.

While Britain gets just 4 percent of its gas from Nord Stream 1, other countries like Germany are much more reliant on the pipeline, meaning its closure is sending prices skyrocketing in international energy markets.

The move has sparked fears factories may be forced to adopt a four-day work week to conserve energy. No date has yet been set for the reopening of Nord Stream 1.

It comes as Liz Truss, who is widely expected to be announced as the new Prime Minister at midday this afternoon, is reportedly mooting a £100billion package to freeze energy bills.

Ms Truss has promised “immediate” action to ease the pressure on struggling families.

Speculation is mounting that she will decide to take a bold holiday-style move – possibly by lending money to companies to keep costs down.

Pipes at the landfall facilities of the Nord Stream 1 gas pipeline in the coastal area of ​​Lubmin, Germany

Incumbent Chancellor Kwasi Kwarteng has already moved to reassure markets that while government borrowing will be “loose” it will remain “responsible”. Ms Truss has also promised a wave of tax cuts to boost economic growth.

Ms Truss told the BBC yesterday that she would unveil new support for struggling households within a week but declined to give details.

“Before you were elected prime minister, you didn’t have all the means to get things done,” she told the Sunday with Laura Kuenssberg program.

“So it will take a week to work out the exact plans and make sure we can announce them. Therefore I cannot go into detail at this point. It would be wrong.”

Meanwhile, experts have told MailOnline that there is “no escape” for the 66million people in the UK who are being encouraged to reduce their use of gas and electricity this winter and even switch off their lights when the winds die down.

At home, people can be encouraged not to use washing machines, dishwashers and ovens between 2pm and 8pm, while charging cars before 9pm is also discouraged as the US introduced similar measures this year became. It may be necessary to give up the weekday family dinner at 6pm or the Sunday roast at 5pm and postpone it to 8pm or swap it for a cold dinner or leftovers.

The NHS association has predicted that the healthcare solution “will have to be offset by fewer staff, longer wait times for care or cutting back on other areas of patient care”. NHS England guidelines say staff must turn off appliances and lights and better control temperatures in hospitals and surgeries.

Schools have even discussed three-day weeks and classes could be combined to reduce the number of rooms that need to be heated each day.